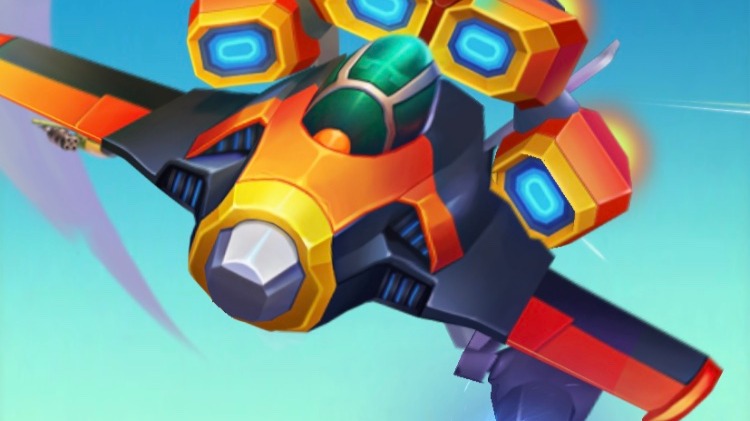 Hi! As an indie developer, I know how to write code. As an entrepreneur, I learned how to monetize games and what KPIs I should track. As being serious about this, I learned a lot about analytics and data. Well. It’s not enough, because I know almost nothing about game design. I hope that acquiring this skill will allow me to finally earn living with games.
I think analyzing games and sharing this with the world can be a great solution for my problem and the opportunity to grow. I’ll start with mobile games (Android and iOS), but I aim to analyze games for many platforms, like PC, Playstation, Switch too.
Bear in mind that this is an analysis, not review!

WinWang is a mobile game about aerial battles and smashing sky force enemies. It’s a shooter and rogue-lite game.

When you start playing you instantly notice that your starship is constantly firing missiles. All that you have to do is position starship accordingly to avoid enemies’ missiles and to aim your missiles at enemies.

Which objective is being met: Accessibility. Thanks to this and thanks to the game being in portrait mode you can easily play everywhere with just one finger. It’s very intuitive and makes the game casual friendly.

There is a drone with you. Or actually multiple drones.

You can “equip” two drones that will support you in the battle by shooting enemies as well. Their firepower is much lower than yours, but they can reach enemies that you can’t reach the current moment. For example, when you focus on dodging enemies’ missiles they can still hurt them.

Which objective is being met: I think it makes a player feel that he is still making progress even if he is focusing only on dodging at the current moment. Additionally, it gives more customization options, because drones can have different attributes and attacks. And who doesn’t like pets in the game? It’s a similar concept.

Frequent upgrades inside and outside the main loop

There are many elements that focus on player progress.

There are also multiple ways to earn currencies, for example, there are daily rewards and countless simple tasks to do. I mean very simple, like “defeat fifty enemies”, “open chest” or “upgrade armor”.

Which objective is being met: So many upgrades gives a feeling of progress all the time. Even if you have time only for a few stages, you can earn currencies, upgrade something, and become stronger. Additionally, if the player is not skilled enough he can still have fun in the game because skill is not really necessary to make progress.

Apart from what I said before, the game is quite challenging but with quite an interesting difficulty curve. I mean every time you start a game, the first stages are very easy, but the difficulty increases fast. When you lose, you get upgrades and again you start from stage one which is very easy. If you clear all stages and unlock a new chapter… It’s the same boat, I mean you get upgrades and first levels are still easy. Maybe, later on, there will be a need for grind or more aggressive monetization, I can’t tell. Boss fights remind me of the Gungeon - PC game.

What I would change

Well, there is one thing that irritates me sometimes and I mean controlling the ship with my finger. Yes, it’s intuitive and satisfying but I think it’s not well adjusted to bigger mobile screens. Making big moves it’s not comfortable enough and my finger sometimes disturbed me from seeing everything on the screen. I would add one simple option to the pause screen - adjusting the sensitivity. I would like for example to move my finger by one centimeter and by that make the ship move by two centimeters. I can think of a few reasons why it’s not here: maybe it would make the game easier or it would confuse more casual players by being not clear what this option does.

Of course, it’s not everything. I have more notes, but… well, I think these are the most important things and I don’t have so much time to write everything ;) I hope it’s interesting or useful for you, it is definitively useful for me.

Hi, I'm Dawid Wnukowski and here I will write articles about me, my business and a bit about my life probably. I would like to share with you mostly my journey about trying to earn living with mobile apps that I create and publish myself. In the near future, I will write some dev logs.