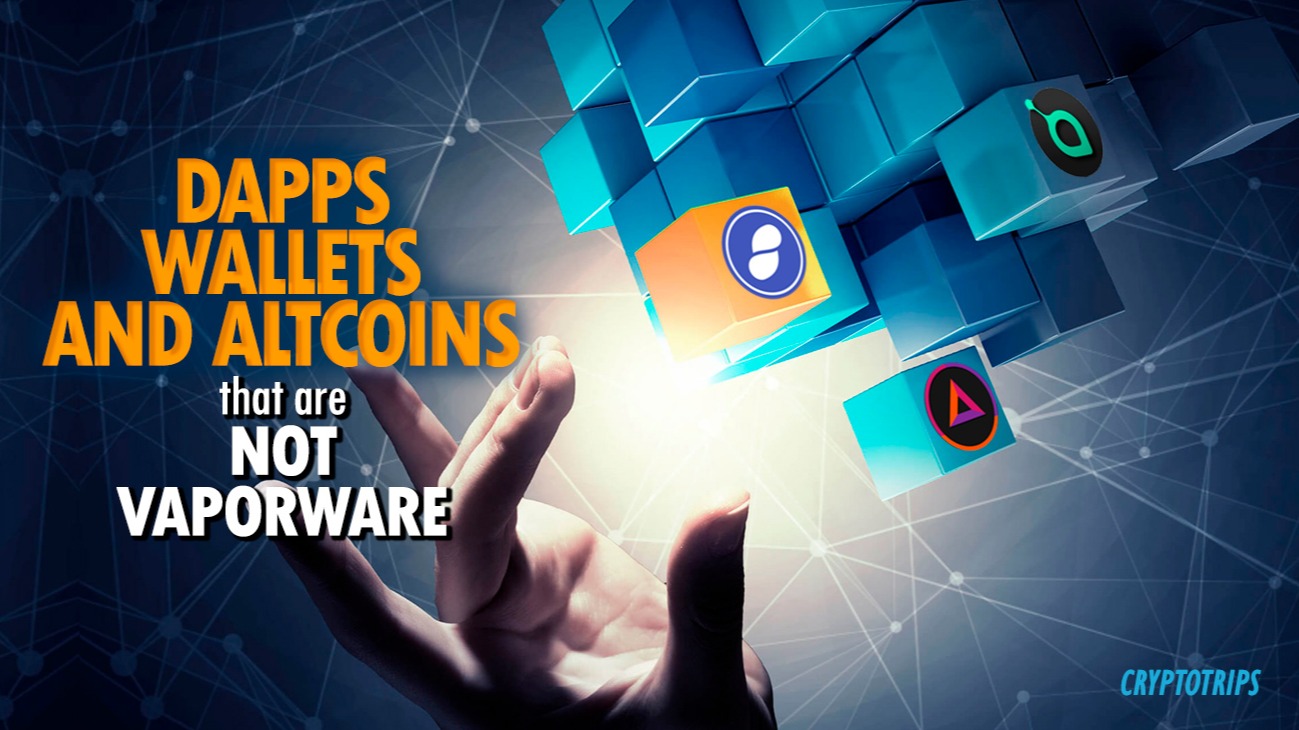 Dapps, Wallets and Altcoins that are Not Vaporware

For a few weeks now, our of cryptocurrency world has really moved, and if we deviate from the path of the two main cryptos, Bitcoin and Ethereum, we will find ourselves within the territory of altcoins, a place where things get as uncertain as they are exciting . But there are ways to go through that territory, clearing up uncertain fantasies and smoke projects, to finally come across concrete realities.

There are three projects that have long attracted me because they have great applications and utilities in the real life, and because they exist beyond the cryptocurrency ecosystem. So they are NOT Vaporware projects. This is the point where many will wonder what that means, simple: Vaporware is a pejorative term used to refer to the software or hardware announced by a developer long before development, but later does not emerge, or have a cycle of more or less stable development.

Clarified the term I summarize these three projects that I mentioned, warning you as always that no one can ensure the success of anything in the future, but that the following are serious projects is already a great discovery in the madness that we live today.

STATUS (SNT)
Status is an open source project, a multipurpose communication tool that combines a private messenger, a decentralized crypto wallet and a Web3 browser. And that recently through a tweet, he had the blessing of Vitalik Buterin, the founder of Ethereum, not bad.

The functionalities and features that STATUS offers make it much more than a mobile application, and future development is truly limitless thanks to open source, the ability for developers to create any Dapp imaginable and the use of all the Dapps that are being created. . . for the Ethereum network.

As a reinvented social network that puts power back in the hands of the people, Status could well be the social platform that blockchain has been waiting for, by using Status Network Tokens (SNT), created as a utility token to power transactions. on the Status Network.

SIA - SIACOIN (SC)
Storage is rarely a major problem these days, but Sia takes care of the issue by applying decentralization. Instead of using a centralized hub like Google Drive or Dropbox, users have their files encrypted and divided into different hosts, which results in a much stronger, more private, secure system, and without unwanted failures. A decentralized cloud storage platform with no signups, no servers, no trusted third parties, and with super affordable rates compared to centralized monsters.

After being quiet for a while, Sia has released the latest updated version of Equinox v1.5.0 and a Layer 2 application called Skynet, which allows users to access and publicly share the content they have stored on Sia as BitTorrent.

And what about SIACOIN? It is the cryptocurrency used with the Sia system. Anyone with extra room on their PC can use the Sia decentralized network. In exchange for their storage space, they’ll get paid in SiaCoin. On the other side of the coin, anyone that needs space pays in SiaCoin to a host.

Like everything in life, the winner is the one who gets mass adoption, so we will see if SIA will reach the top of decentralized cloud storage platforms, even though it is one of the oldest, launched in 2015.

BASIC ATTENTION TOKEN (BAT)
I think we all know this one if we are here in PublishOx: BAT, the utility token of the Brave privacy web browser. And what was the premise of its creation? Instead of users giving up their privacy and data for ads and trackers, why not trade BAT?

And why does it work? Thanks to a protective layer in Brave that protects user data. Users can watch ads and be rewarded with BAT tokens, and they can also tip tokens for the content they like. In turn, content creators earn tokens based on the amount of attention they receive, such as viewing time or duration, thus eliminating the always undesirable middlemen who take some of the money without doing much to deserve it.

Since its inception, Brave has always come under fire for various reasons, but the important thing is to see and assess how much more security it can offer as a browser in the near future. Even with all the doubts it may raise, Brave is successful as a real world app that you can download right away and start earning BAT.

And as I always tell you, research, read, learn, enjoy, follow me (the less important one) HERE... and with or without vaporware projects, be happy!