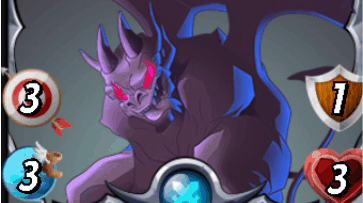 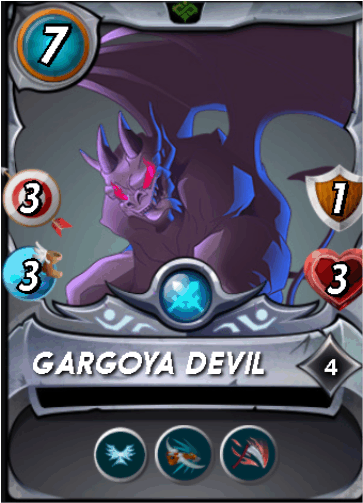 If you haven't been following the notices, the updates, or if the area under the rock you've been hiding has been just too cozy to want to go anywhere, then you may not know that Chaos Legion is the next expansion of purchasable packs in Splinterlands. And with their imminent arrival comes market chaos for current cards. People are saving up trying to get some of those sweet meta-changing packs. But, what will some of these new abilities mean for older cards?

Cloak and Dagger: Deathblow and Camouflage

The new abilities added to the game add another metric of play and counter-play to the summoner arena. Deathblow (double damage if the enemy only has ONE unit) seems to be an excellent counter to last stand and will likely be seen on numerous lvl 1 creatures to counter this mechanic.

Deathblow will likely lead to certain cards like Kron the Undying and llama mage becoming less relevant to the meta as time goes on. The infamous combo will likely see a dip in value after the presale voucher release. Below is a neutral card with deathblow, there are likely to be more later on.

Camouflage cloaks the unit from being targeted by snipe opportunity etc. This ability has a lot of potential for lineup disruption depending on which sort of creatures end up having it. This ability entirely depends on the utility of the creature that holds it. Likely certain cards in the current meta will appear to be good card counters on a card by card basis.

Forcefield reduces the damage of a strike from 1 to zero if it is of 5 or more. This ability is interesting, and is severely countered by anything dealing 4 or less damage but specializing in the massive blows that are possible in any lineup (Sandworm comes to mind). This ability will also see card appeal and meta change on a card by card basis, but will change the future of the game. 10 plus enraged damage strikes now can be reduced to 1 damage.

This ability might have also been neccesary to add to the game because of the high damage threshold ability added to brawling arenas known as "Bloodlust". Bloodlust is an ability sported by Gladius cards where they gain 1 in every stat if they are able to deal the final blow on an enemy unit. This stat change is for the rest of match. Naturally this can lead to some pretty exaggerated hits from certain Gladius characters.

Amplify improves the strength of thorns, return fire, and reflect. It is going to be reasonable to expect players to be utilizing these new cards that have amplify with current infamous cards like Mylor Crowling or The Hydra. However, it is hard to tell how many cards will have this ability (let alone which faction that they will be allocated too). The only prediction outside of the shift from the last stand meta to be made is that there will be market chaos.

Market Foreshadowing: It's All in the Cards

Currently cards like Kron the Undying and Scarred Llama Mage are the cause of powerful low mana lineups, but it is entirely likely that ANY new card in the new set with Deathblow at lvl 1 could be an easy counter to these old favorites. Other cards, as they are revealed and played around with will also change the way we view and value these cards. This in turn will change the market value of various cards, both up and down. The only ability that seems to counter one specific style of play appears to be Deathblow, and it seems to be an excellent counter at that. Doubling damage can easily be enough to cull last stand in the right situation. The other abilities (camouflage, amplify, and forcefield) are very dependent on the particular creature that has them, but deathblow seems to be an excellent counter to last stand ON WHICHEVER CREATURE HAS IT. There may be many new cards with these abilities causing last stand as a solve-all low-mana playstyle to not have the same impact as before. This is all speculation based on the sneak peaks of abilities within the Chaos Legion reward cards, the amount of cards with any of these abilities may be few or many upon release. It's impossible to tell until later in the month, but it is possible there will be a few hard counters to the current last stand meta that will shift some of the current market prices.

Overall the new abilities will change the strategic value of certain cards, and likely highlight the value of ones that are currently overlooked due to low synergy. This will be at random proportions and cannot be determined beyond anything more than that last stand will be easier to deal with than before (The deathblow ability counters the last stand ability DIRECTLY). Any other meta change is purely speculation as it is entirely dependent on WHAT IS IN the Chaos Legion packs. There will certainly be cards that won't shine until late season, while others will see quick counters early on in the season upon pack release. All dependent on what sort of interesting combinations are offered in Chaos Legion. While it is impossible to be 100 percent certain, it is easy to predict Kron and Llama will be less popular of a duo for their powerful last stand "unbeatable" synchronization (which can be beaten even with starter cards in the current meta using tips here). The important things you should take away are: that we are in the middle of market shifts (cards will be going up and down here), the newer abilities particularly counter last stand mechanics, and Chaos Legion is going to change the way the game is played at all tiers upon release.

Keep Summoning and See You in the #Splinterlands

Cryptonius' Tips From the Splinterlands

Content and tips from the hot blockchain game Splinterlands.