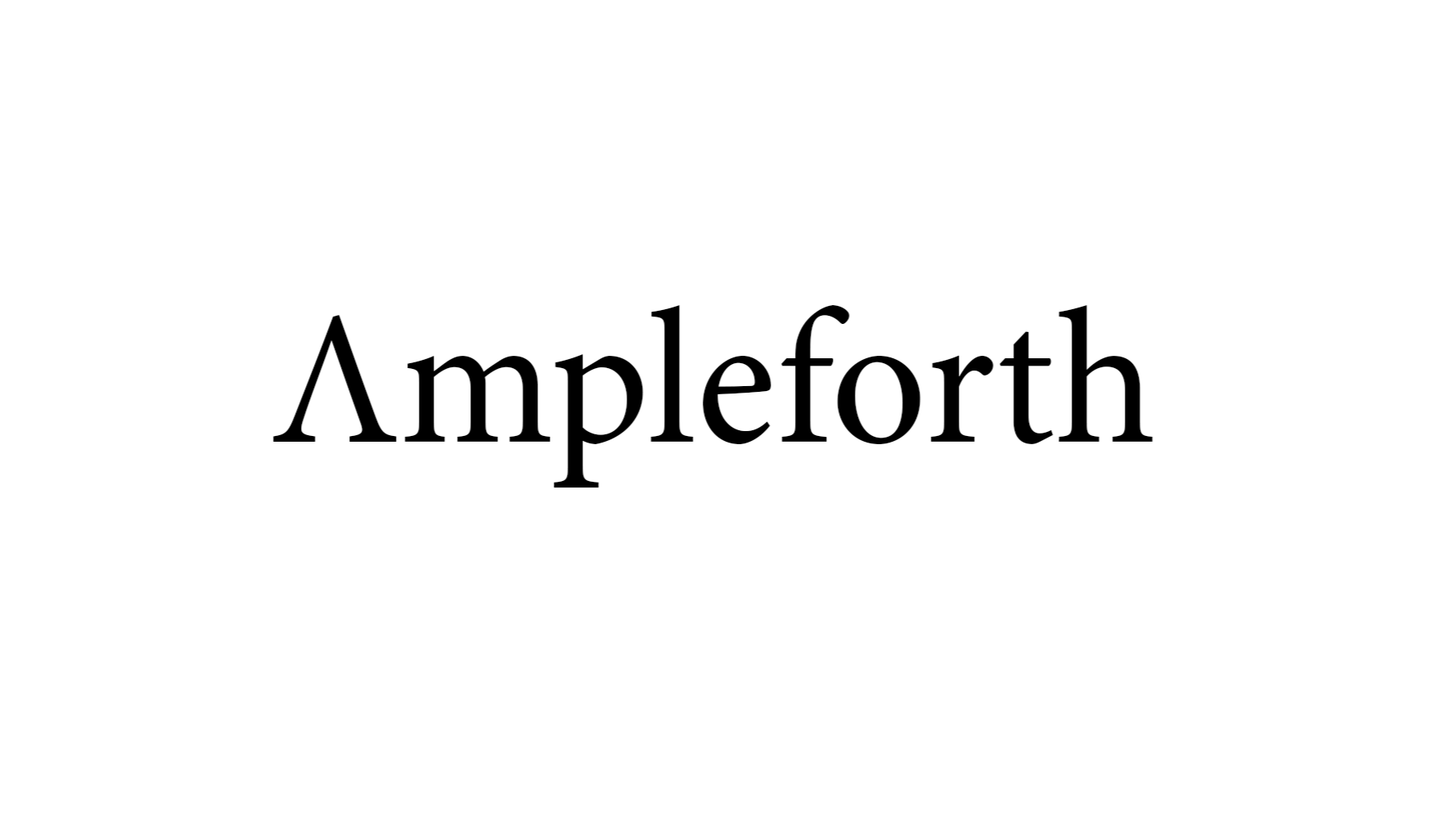 It’s been a while since I’ve done one of these guides but I’ve kinda been pushed to do it because of a very unique project that I’ve just come across with a very interesting economic premise; Ampleforth (AMPL).

Welcome to my guide on Ampleforth (AMPL), including the project’s history, team, economic and technical architecture, as well as development milestones.

The History of Ampleforth (AMPL)

Ampleforth (AMPL) was launched by Founded by Brandon Iles and Evan Kuo and a team with an extensive background in major tech companies and distinguished academic institutions. Kuo is Ampleforth’s CEO, and also handles product engineering in a team of 8 (while Iles handles architecture engineering).

Although there aren’t many resources that timeline Ampleforth’s progress since conception. The idea for the project was conceived of in 2018. The team released the Ampleforth (AMPL) whitepaper in May 2019, which went over the somewhat complicated nature of the design (which we will get to shortly.)

The list of investors is quite impressive. In addition to Coinbase CEO Brian Armstrong investing personally, Ampleforth has received investment from:

Members from the advisory board include individuals from some of these investors - but on top of that, they have advisors from Facebook, MIT and Stanford.

The project is named after a character from George Orwell’s 1984, quite poetic to be honest :)

The goal of the project is to become truly uncorrelated to other assets and the economic rules are at the heart of that. Think of Ampleforth as a fluid economic system where the focus is keeping on a user’s spending power stable, and that’s probably the simplest and quickest way of explaining it.

With Bitcoin, while it may be uncorrelated to traditional markets (though even this seems to be in question lately), it is still volatile and this presents a lot of problems - like merchants not accepting Bitcoin because the price drops too quickly.

The Ampleforth team has come in to address the void here, saying that altcoins do not offer a robust enough design to stand as an alternative to Bitcoin, which itself has its own shortcomings.

But the focus is not to address volatility, and the team says that they expect the AMPL token’s launch to arrive with volatility in terms of both supply and price (which will initially be set to $1, but of course subject to change.)

What Ampleforth is doing instead is attempting to create an asset that does not correlate to other digital assets, and by extension be a welcome choice for investors who want a sound digital asset to invest in. The team have said that the tokens “are designed to be suitable for use as a "base-money," a form of collateral to be used as part of a centralized or decentralized banking system.” 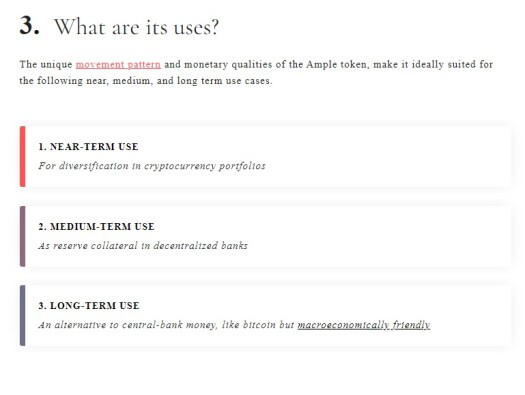 Some use cases of Amples.

Keep that in mind, because Ampleforth has some ambitious goals, saying that Amples can “evolve into a fair and politically-independent commodity-money that can be used as an alternative to central bank money.”

To summarize, AMPL tokens  - which are ethereum ERC-20 tokens I should mention - is intended to be an asset that is uncorrelated with other crypto assets. This is achieved through a "rebase" mechanism which we shall discuss next, in simple terms AMPL is "supply based economics" rather than "price based economics", which means the overall market cap will rise or fall based on the SUPPLY of Amples, rather than the $ price.. stay with me, this is truly unique. 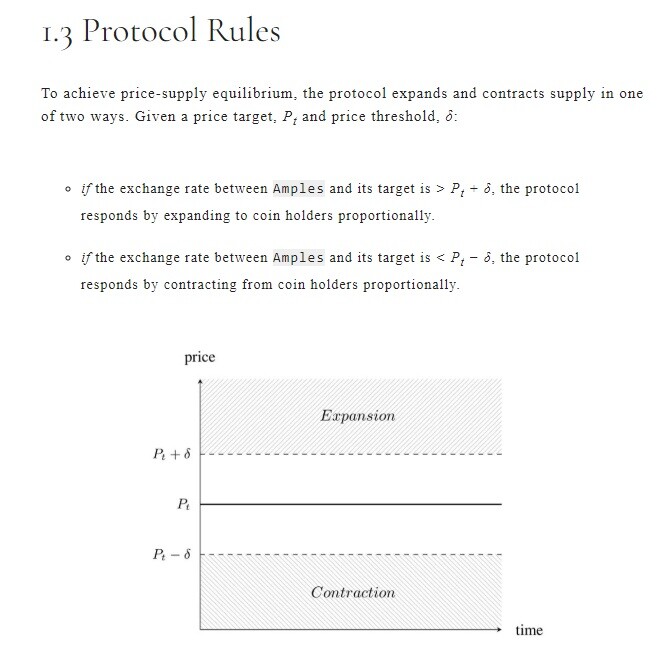 Not as confusing as it seems. As demand goes up, so does supply, and vice versa.

Now the question is how does Ampleforth reach a price-supply equilibrium? Knowing this gives a sense of how AMPL differs from stablecoins (and I've written guides on stablecoins like SAI and TrueUSD).

AMPL is designed to target a $1 price ($0.019 technically but lets talk  in simple terms, and it does this through an elastic supply mechanism built into the token/smart contract itself.

If the price is above $1 then the supply increases (called a rebase), yes, every day at 13:00 EST time a "rebase" happens which changes the SUPPLY amount of ALL AMPL tokens.

The same is true in price decreases. The negative rebase reduces the supply. You have 1000 tokens at $1, if the price drops to $0.90 you will have 950 tokens.

This in effect puts everyone on a sort of margin position by default. It can also get pretty crazy; a 5% compound daily for 15 days DOUBLES your tokens. But beware, it also halves them if negative!

This is how Ampleforth has a liquid design and maintains a price equilibrium.

Other points worth mentioning include the fact that the network will use oracles to absorb price information from whitelisted data providers, and countercyclical pressure - this last aspect being a recurring talking point in the team’s various documentations. 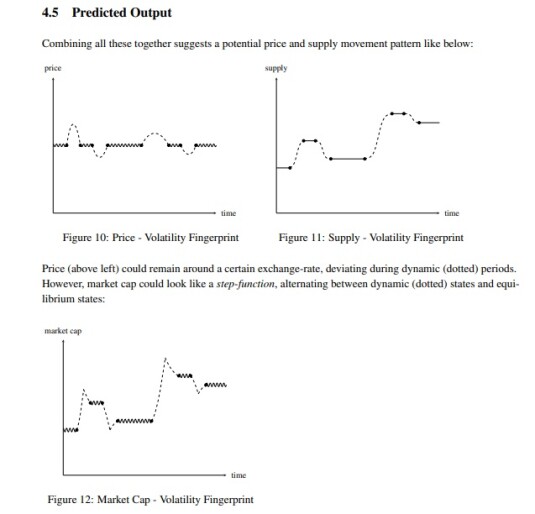 Short version: the economic rules means volatility that is uncorrelated to the crypto market.

This counter-cyclical pressure is a result of the fact that both price and supply change, and that together these determine how volatile the Ampleforth economy might be. But, counter-intuitively, these together make for a different volatility fingerprint for the network, at least according to the team’s theories. This makes it uncorrelated to other crypto assets, and solves the worries that some investors have of the market sinking as a whole in times of volatility.

If these economics make your eyes pop, I really recommend you go over Ampleforth’s Red Book, which provides comprehensive coverage of both the protocol rules and economics behind the network.

Ampleforth mainnet launched July 1st 2019. Since then the protocol has been working, price and rebase have moved up and down, and the economics have held - Ampleforth has been doing it's job.

Notable boxes that have been checked off include work on the Ampleforth monetary policy and market oracle contracts, the release of the whitepaper, a security audit and the GitHub release. The next few steps are the launch of the testnet, governance roadmap, and with the launch of Uniswap V2 a focus on increasing the liquidity of the AMPL token and incentivising holders to provide liquidity.

This is genuinely a pretty unique project. It serves the financial markets, it could be said to be "a trader's coin" in that it can have volatility in it's early days, but also interesting and complex economics and tokenomics to figure out.

As an investor, or a trader (not that I am giving any investment advice), I think you have to be EXTRA careful, this isn't just a case of "buy low, sell high", it's also not a case of "HODL" as the rebase and daily % supply increases/decreases really add a lot of extra complexity - but if this is your thing and you can figure it out then it could be a real opportunity.

The real test for AMPL over the next 3-6 months will be if it is able to increase it's market liquidity - i.e. if a large investor could buy in $100k without moving the price up or down 50%+. This extra liquidity will bring maturity to the market and less swings in the rebase and it could mean AMPL is more likely to be used as an asset, as a currency, to plug into other defi mechanics (loans using AMPL as collateral? lending AMPL via Compound?) and be much more than just a speculative asset.

A solid team, an all-star investor lineup. Some genuinely interesting and sound economics - which have worked during a 9 month period since launch - and a growing interest in defi, stablecoins, arbitrage, even just trading - this is one to watch.