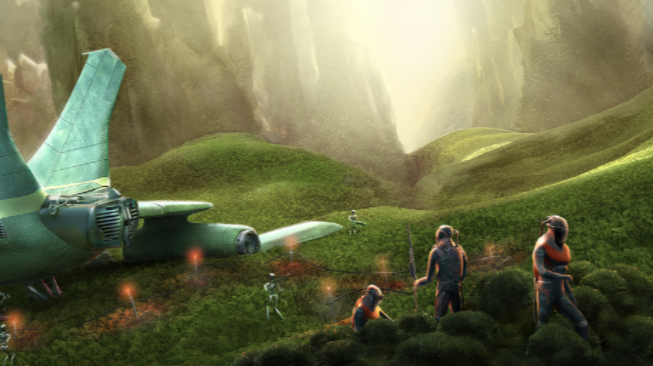 Another week is over and it's time for another edition of the Play2Earn report. The first half was pretty stressful with a lot of work again but it got better towards the end of the week. My huge highlight was the release of eXode's first part of the colonization gameplay. I'll have more on that later on. Other than that, I've only managed to publish 2 articles during the week, something I definitely want to work on. I have some ideas that I want to set into motion during the weekend, I'll probably do a little self challenge here. If all goes well, I'll have more on that in an article on Sunday. Before we get into more detail on my different projects, let's have a look at my token gains first:

Good solid growth across the board. A lot of these tokens are nearing big milestones - Leo should get to 10,000 in about 2 months, CTP will get to 20,000 in a few weeks and SPT is almost at 100,000. I haven't decided yet what I want to do when I get to these marks. I might just keep stacking, but being the unit biased person I am, I might decide to let it stand there. I'll look into other interesting projects and if I find something interesting, I might start to stack another token or two. If you have a great idea that I should consider, please let me know in the comments! I've also ranked #6 in the third @ctpsb power up challenge, winning me another 5.something CTPSB tokens. I might start getting more of these as well, we'll see in a few weeks.

Next, let's have a look at my different projects:

It's been a while since I had anything but Splinterlands in the first spot. I don't think any other project than eXode would be able to do that but this week, it's well deserved. As I've talked about in my article during the week, the first part of colonization gameplay started earlier this week. Anybody that manages to beat Evacuation and successfully lands on a planet will automatically claim their planet NFT which will provide additional bonuses to the account for live. So if you did not do so yet, head right over to eXode and get going!

It took me two tries but I managed to claim my planet successfully and am now the proud owner of an Ice World at the other end of the universe. While there are still a lot display issues and other bugs to be dealt with, I'm already really impressed with the whole experience. The game is amazingly atmospheric, especially the sound effects and the background music is really amazing. It's plain to see that eXode is a completely different kind of beast. So far, no other blockchain game out there is even getting close to what eXode is already offering! Also, the next part of colonization gameplay will be added later this month, so things will only get better from here!

The new version and especially the planet NFT also helped to spark a lot of interest in the game. I've found a lot of new referrals with my articles. So far, I've brought 51 new captains to the game, earning me 102 booster packs in the process. I'm also still providing free cards to anybody joining the game. If you didn't take the offer yet, feel free to leave me your account name in the comments and I'll make sure to get you some cards to kickstart your journey into eXode.

There's also a lot of action going on at the game's marketplace. All boosters below 3$ have been sold and right now, there's not a single booster listed by players. If you want to get some, the only way is now to get them from the game directly. All cheap contracts have been bought up as well, the only contracts listed right now have an asking price of 399$. I don't expect them to sell at that value (at least not yet), but it's certainly cool to see all the action going on. For now, I'm not putting anything up for sale that I did not already list. All the contracts have been dropping NFTs for a year now so the market is pretty flooded with contract cards. I expect these to get bought up more and more during the next months, so the prices for individual cards should go up quite a bit eventually.

Splinterlands is on fire like there's no tomorrow at the moment. They sold almost 100,000 booster packs within a single month and we are already super close to the next airdrop which just might happen as soon as this weekend. After that, there are only 300,000 Untamed booster packs left before it's all sold out. I never expected this to happen so fast just 6 months ago and I'm pretty sure that the rest is going to sell even faster than the last 100,000 did. As soon as we get close to the limit I'm sure we'll see some more FOMO kick in with people trying to get more boosters while they can.

Land sales also picked up considerably, with only about 39,000 plots left. Depending on how fast development is, we might be sold out there as well before the feature is even launched.

Personally, I've skipped some tournaments during the week for a lack of time but I at least managed to do my quest every day. I'm back in Champion again already, currently ranked at #33. I'll have a friend visiting next weekend which is going to collide with the end of season on next Saturday. I'll try to push all the way through Champion I before that, but realistically I'll probably finish in Champion II for the season.

Noise is slowly but steadily changing the way it's working. Ever since the site launched, they were providing free tips to their users which you could then give to other users, keeping a portion of it for you. A while ago they also added a small 0.01$ tip to their like feature and at the same time reduced the amount of free tips they were distributing. Just today, Noise announced that they completely removed the free tips from the system. From now on, all BCH is going to come from likes.

Let's see how this is going to play out but I have to admit I'm not too happy about the change. I've been receiving a lot of free tips and I don't think the new system will be able to keep up with that. I'll probably make an article and give an analysis of the effects in a few days. Let's just hope that it will still be worth the effort. I've put quite some time into Noise and was earning several dollars worth of BCH every day with it.

Doctor Who finally introduced the option to withdraw vUSD from the game. While this is obviously good news, I'm really not too happy about the way it was implemented. In order to withdraw anything, you have to complete KYC with their partner. Obviously, they never require you to do KYC to buy anything from them. I'm not a fan of KYC and I'm very picky about who gets my data. So for now, I'm not doing to complete KYC and I only will if the game ever takes off and there's enough money to be made there to justify it.

And that's all from me for today. I'm quite confident that I'll manage to get back into my crypto routine now, so I'll hopefully see you tomorrow with another article. Thank you all for reading and see you next time!