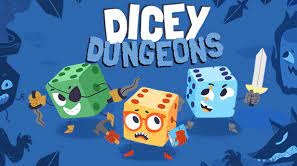 If there's one thing in games I really despise, than it certainly is throwing dice, especially if you are throwing a lot of them. I don't need to play a super hardcore, extremely deep game every time. But having my whole game decided by some random dice throws never appealed to me. There are fringe cases where dice are only used for a small portion of the game but usually, I just can't stand it. So apparently, I was not all that thrilled when one of my mates approached me, telling me about a game called Dicey Dungeons. After a lot of discussion and explaining, I agreed to give it a shot and to my surprise, I've found the game to be actually rather enjoyable! At it's heart, Dicey Dungeons is pretty close to deck builder roguelite's like Slay the Spire or Across the Obelisk. You pick one of 6 classes, decide what quest to go for, and head right into the dungeon. The main difference is that, just as the title implies, you are not really building a deck all that much and instead will mostly rely on throwing dice at your opponents, sometimes even literally. You start each run with only 1-2 items equipped and move from combat to combat on small maps with only a few nodes to visit each. Once you move on a tile with an opponent, a separate combat screen will come up. There, you'll throw a set amount of dice each turn which you can then use with your equipped items. As you advance through the levels, you will find more and better equipment or you may get to upgrade what you already have. Each piece of equipment comes with a different effect and needs different die results to be activated. If you look at the screenshot above, the Hammer will just to the die's result as damage and has an additional effect if you rolled a 6. Whisper requires to you to have an odd result and will then weaken your opponent, regardless if you rolled a 1, 3, or 5. There are dozens of different items in the game and that's what makes the game so interesting. You have 6 slots to equip your items (with some needing two slots) and it's up to you to make the most out of it. The first impulse might be to just stack up items like the Hammer which rely on you rolling as high as possible. Ideally, though, you'll craft your equipment in a way that allows you to make the most of it, no matter your actual results. Because of that, the game is a lot more strategic than you might initially think. A well rounded build is never going to only loose because of bad luck because it will be able to utilize all possible results.

While the basic rules are more or less the same for all characters, they differ a lot in the way they are played. The warrior is more focused on high rolls, dealing huge amounts of damage. The rogue wants to roll as many dice as possible and will gladly take a lot of 1's. The other characters are even more complex, each introducing their own mechanics on top. There's a robot with a push your luck mechanic for example. He has a maximum capacity that he can deal with and it's up to you to decide whether you want to roll another die or not. As long as your total stays below the threshold, you can keep throwing dice, but once you go over it, your round ends immediately.

In total, there are 6 levels per character, bringing the total amount of different levels to 36. There's also an additional boss battle and there's also a hard mode for each of the different levels. If you want to play through everything, you're going to be busy for quite a while. The game has a somewhat fun story keeping everything together as well. Each contestant is a die, brought into this odd dice world from outside. Lady Luck, the evil mastermind and final boss of the game, has promised each of the heroes to fulfill their biggest wish if only they make it to the end. Without spoiling too much, things are obviously not going as our dice heroes expected and the story offers quite some twists along the way. All things considered, it's pretty entertaining and fitting for the somewhat absurd world the game is taking place in.

What I really like about Dicey Dungeons is how it's merging two things that seemingly don't match. It has a pretty deep and strategic gameplay, all while using random dice throws to decide everything that happens. There obviously is some amount of luck involved in the game, but it's at a level that feels fair and pretty entertaining to me. If you loose a lot, it's usually not because you are unlucky but simply because you didn't craft your deck in the right way. I'd say the game is about 75% skill and only 25% luck which certainly is more than you'd expect from any dice heavy game. Dicey Dungeons was one of these games that I played almost exclusively for a while after I had picked it up. I have a total of 27 hours played on Steam and I'd say depending on how fast you figure out everything, it should take you about 20-25 hours to finish the main story line. If you want to finish all hard modes and achievements, you should at least double or even triple that number. As you can see from my hours, I quit eventually, but that was after I had finished all of the normal content. If I feel like it, I might get back to it some day to complete some more hard mode levels.

The game has a solid 90% positive rating on Steam and is currently sold at 12,49€, so something about 15$. I feel like the price is pretty fair although there are games with a similar price that will provide you with a lot more gameplay before things become a bit stale. Nevertheless, Dicey Dungeons is highly entertaining and addicting for a while. If you are into roguelite deckbuilders, chances are you'll enjoy it quite a lot!