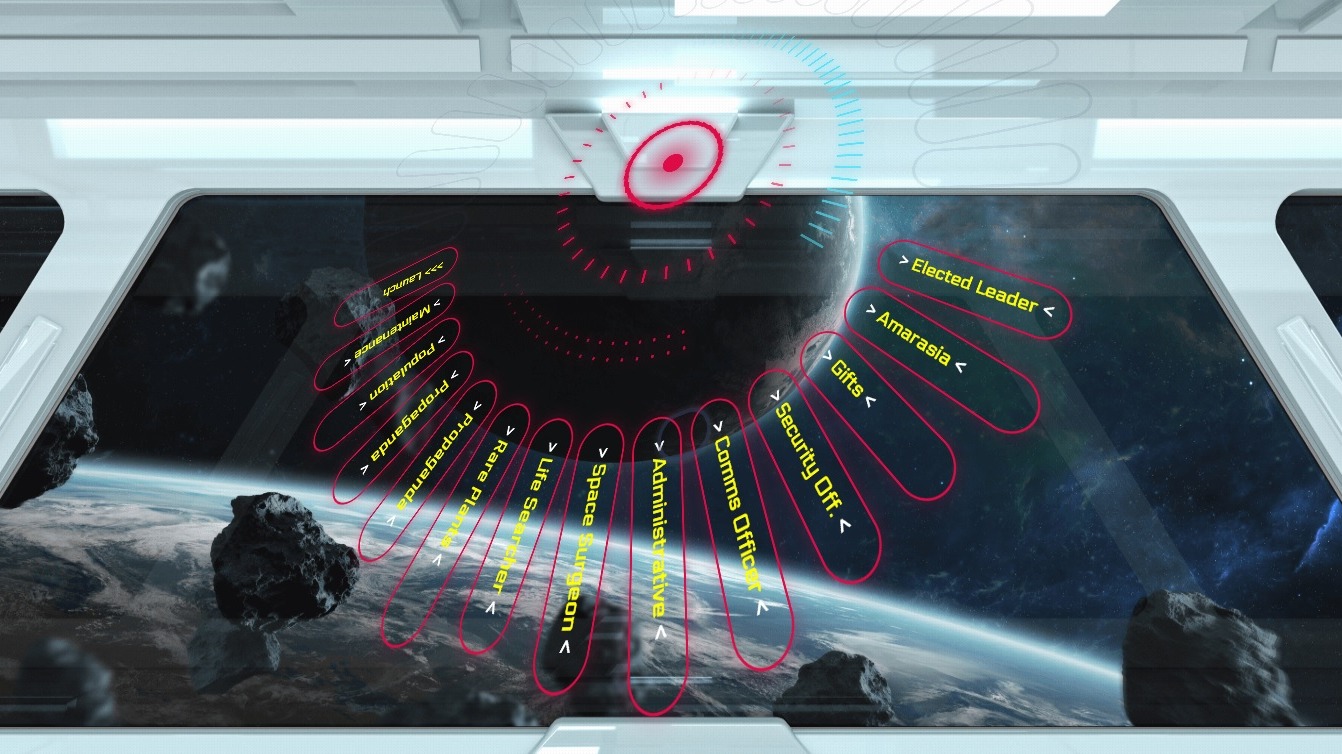 Things are still moving very fast for eXode. Yesterday we saw the release of the new launch screen and with it we are another step closer to playing with our own cards. I'll take you for a tour through the process of setting up a new game. Besides showcasing the beauty of the new launch screen there are also some takeaways regarding the actual game play. So as always, we are going to learn a bit more about how the game will be played by looking at the new images available.

In case you haven't heard about eXode I'd advise you to first read the articles analyzing their games manifesto or their first playable Alpha version. You'll find all the basic information about the game there. In case you haven't done so already The Comprehensive Guide to all EXODE Alpha Edition Origins also might be of some interest before reading this new article. In short words, eXode is a decision making game powered by the Hive blockchain. It's made up of a fast paced Evacuation and more laid back Colonization stage. The game is strongly focused on tradable cards that can enhance your playthrough in many ways. So lets get right into it and have a closer look at how exactly you are going to pick the cards you want to bring with you. 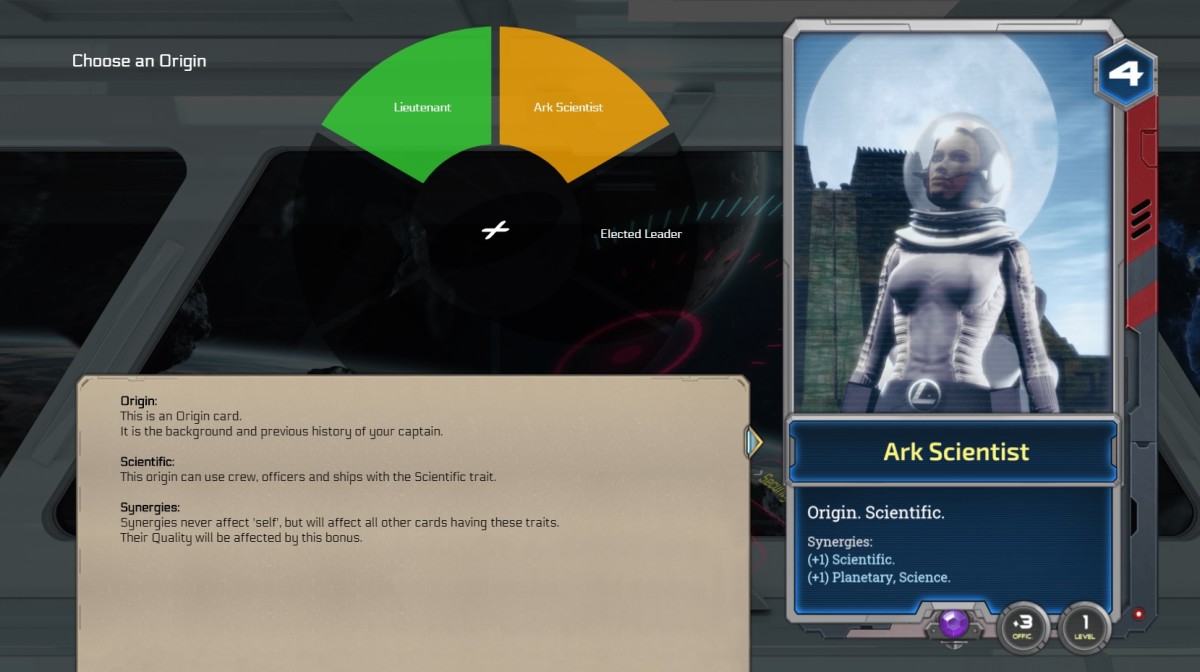 The first decisions you'll have to make when starting a new game is what Origin you want to play. Right now you only can choose the Ark Scientist, the Elected Leader and the Navy Lieutenant, but once Booster Opening is here the rest of the bunch will become available as well. I really like the way the menu is set up. You choose the Origin you want to use and are shown the currently selected card on the right. On the bottom left all traits the current card has are explained. This pattern is used for all menus and works well in my opinion. By selection the Origin of your choosing the selection screen is populated with slots for the cards your Origin brings with it. 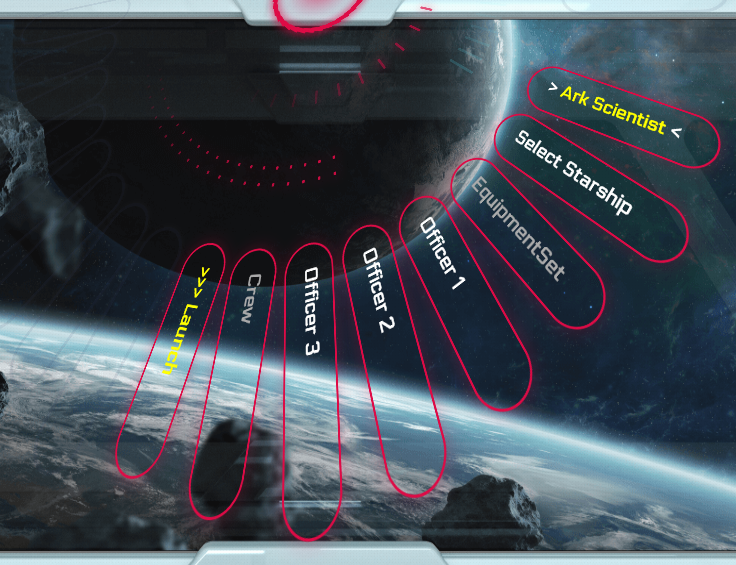 Your Ark Scientist has access to a starship and can command 3 officers. Equipment sets and Crew is still grayed out because the amount you can bring for each is determined by your starship. I think it's a very clever design to have the selection screen change corresponding to the picks you make. This way you are always working with the same menu and don't have to move back and fourth between different screens if you want to change something later. At the same time only the choices currently relevant are presented to you. 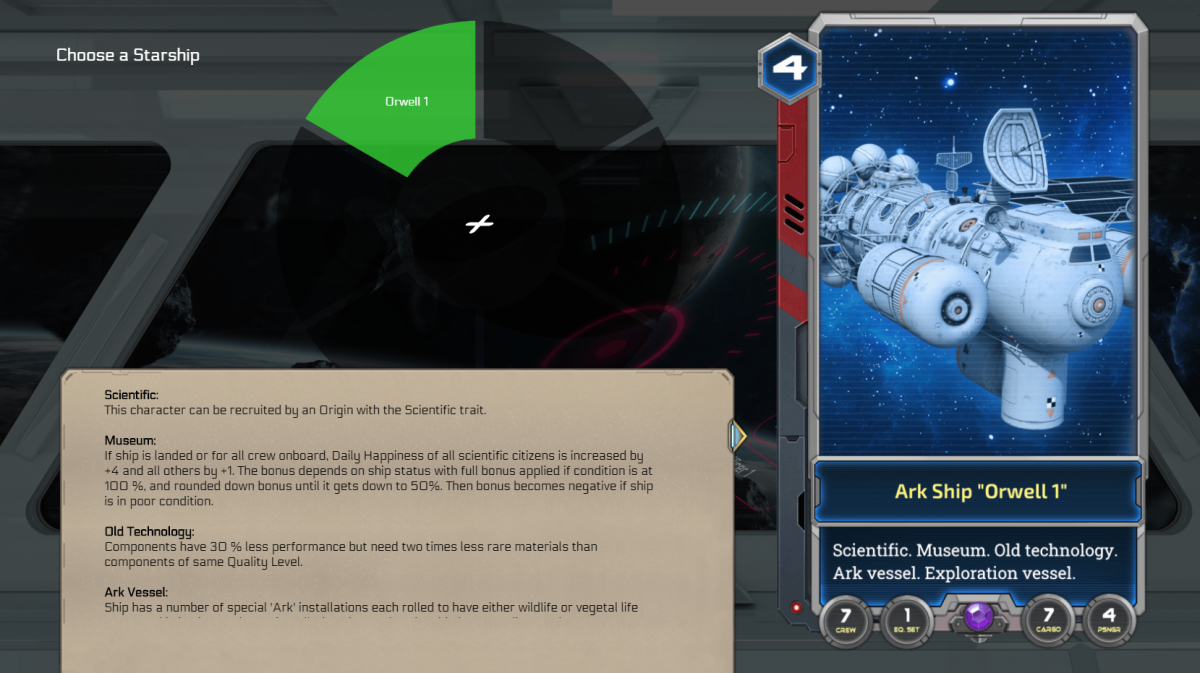 So up next, we select the starship we want to use. Without any Boosters opened we only have access to the Orwell 1 as this is the standard ship the Scientific Origin uses. Again, all traits are described in great detail and allow us to learn a little more about what to expect from the actual game.

The Museum effect refers to increasing (or decreasing) the crews happiness. We already expected to see some happiness mechanic when we learned about the Happy Soda provided by the Foodie Moodie but we haven't seen any specifics. So Happiness is going to be measured as a numeric value that can go up and down on a daily basis. It will be interesting to see whether the increase/decrease is going to happen as a daily tick or as constant change spanning the whole day. What we've seen so far seems to be in favor of the first option but we'll have to see how Colonization is going to look in the end.

The other interesting aspect we see here is the fact that the ship status is changing the effect of Museum. This does add a lot of flavor (Scientists don't like their precious Museum destroyed) but it will also affect how Evacuation will be played. So far you'd usually try to get out in the last second possible, willingly taking some hits to load more cargo and passengers. With this new effect though you'll really have to consider if its worth taking another hit or not. If you barely make it out of Evacuation alive you'll end up with a badly damaged ship constantly draining on the happiness of all your colonists. Being of old technology will help a bit with repairing it faster, but it still might be the best option to fire up the Hyperdrive as soon as it's ready with the Orwell 1. Having effects like this will definitely help to make Evacuation even more strategic.

After selecting the ship you choose the equipment sets, officers and crew to bring with you until you are all set up and ready to go. I immensely like the design of the new launch screen. Despite some minor issues it's bound to still, have using it already feels really smooth. One thing I can't show you here but that deserves to be mentioned as well is the quality of the soundtrack. While writing this whole article I had the actual launch screen opened with the background music playing and I really enjoyed it. It's really top notch and very atmospheric!

The whole new launch menu once more showcases that eXode aims to be much more than just another low effort blockchain game with minimal actual gameplay. Toying around with all the options already available got me pretty excited and I'll do another article in the coming days to discuss some of my more interesting finds.

As always, thank you all for reading and please let me know what you think about the new launch screen in the comments. See you all next time. 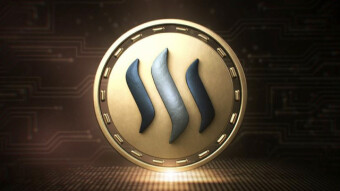 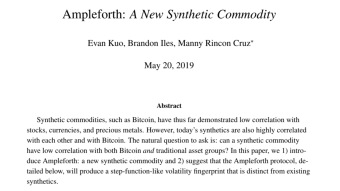