Hi my dear followers, as promised yesterday on my Telegram channel, after posting quick news of the market here comes my new complete analysis. It will represent an all-time review from beginning. 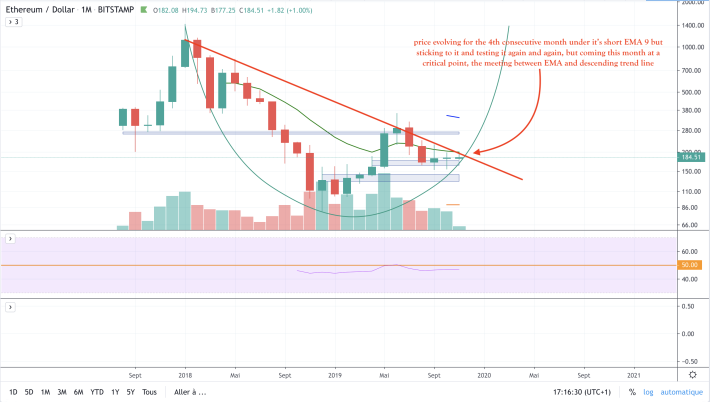 As time from existence is too short, it will be impossible to use Ishimoku Kinko Hyo on this time unit (TU). But we still can gather important informations. First one is that price has been maintained and effectively rejected three times in the last months by EMA 9. And November isn't of any exception as price has also been rejected for now. But we arrive at a very critical point where the downward trend line and EMA creates a perfect angle. This may where the price will move. In case of a up cross, we may finally see it becoming a good support to face EMA 9. Or, it may also work in pair with EMA to push price down. Let's see in the other TU which one of the scenario is more likely to appear. 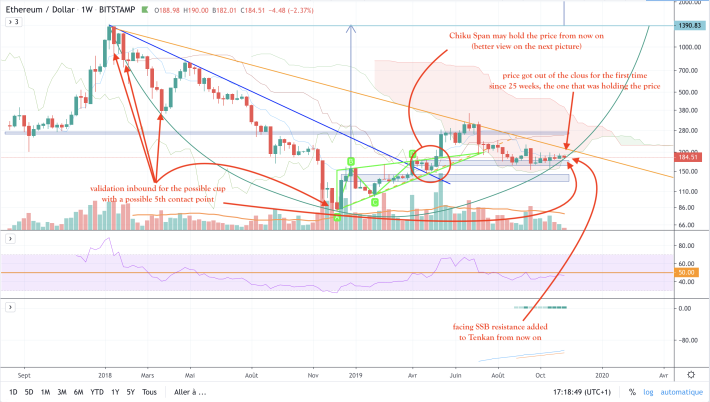 First here, the technical point shows a probable validation of the cup in case of a rebound above its limit.

Regarding Ichimoku, price now is evolving under SSB as it had no choice but to cross it, being forced by Tenkan that is opposing resistance since 8 weeks for now. Next support may be offered on Chiku Span side. As this graph isn't easy to analyse on Chiku Span's side, we'll review it here under : 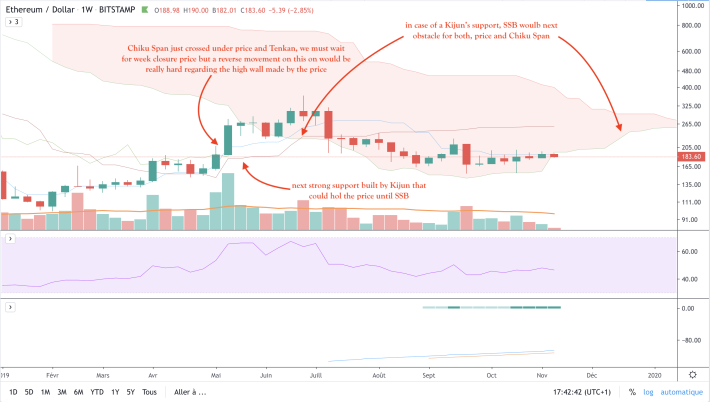 We can attend here to the fall of Chiku Span under the price and Tenkan. We must wait for week closure to confirm this statement, but as the wall created by price's candle is so high, it is difficult to imagine it the other way round.

But the good news is that it will be facing Kijun, a much stronger resistance than the other two. Kijun already supporting the price for now around 180 $. Let's just keep in mind that if Chiku Span is able to use it as a support, it will be facing the next strong resistance represented by SSB, and this at the same time as the price should reach it, around 225 $. 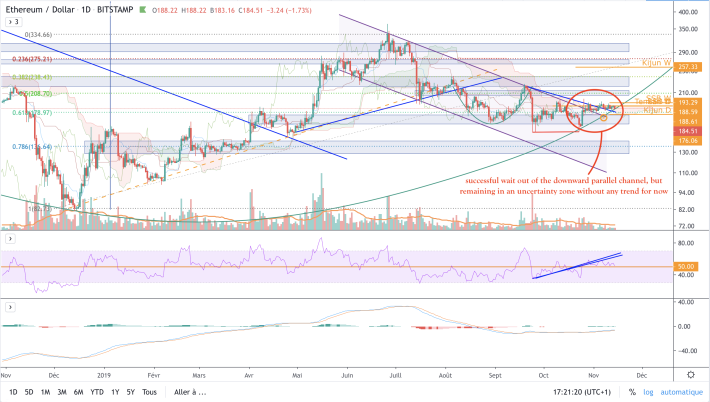 First a little review of the large movement. Price succeeded to break up the downward parallel channel and to take support over the trend line created by the last movement, while BTC wasn't able to do the same (this is clearly viewed as ETH/BTC is regaining dominance, see below in the article). For now, as it is clearly show in the graph and illustrated by Ichimoku and Volumes, price is now waiting in a total uncertainty zone without any trend. 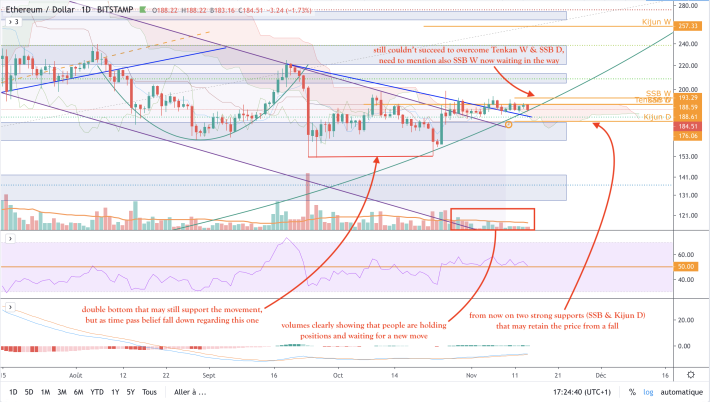 In a closer view, we still have the double bottom that may push the price upward, but as time pass, it is slowly being invalidated. Also, price fell to overcome Tenkan W & SSB D and waited enough to also have SSB W waiting in the line of strong resistances just above them.

In term of supports, we have now SSB and Kijun D slightly lower that could support the price in case it would need some rest before retesting again its climbing. But I strongly consider close stop losses under them in case the price is rejected and pushed back again.

I'm not expending on Chiku Span for this TU as it faces the exact same resistances and supports, thus confirming the previous intel.

Volumes clearly illustrate that people aren't moving. Everyone is holding position, waiting for the first move to take a decision. This would also confirm the amount of stop losses waiting under Kijun D. Important to consider it in case of a break down with also a heavy surveillance of Kijun in this option as it may indicate on first position the end of such a movement and then a new entry door (just as we could see right after the first bottom). 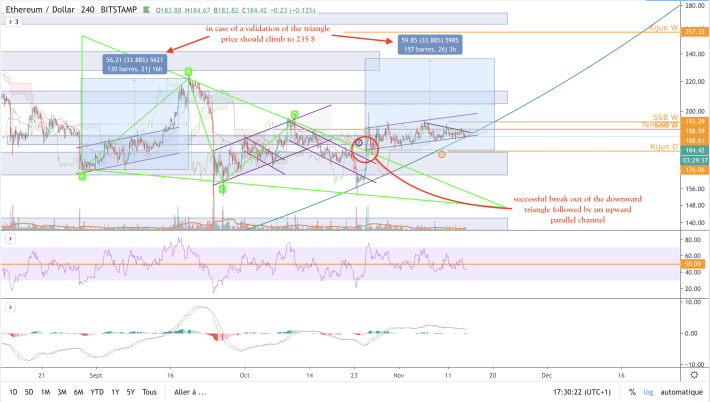 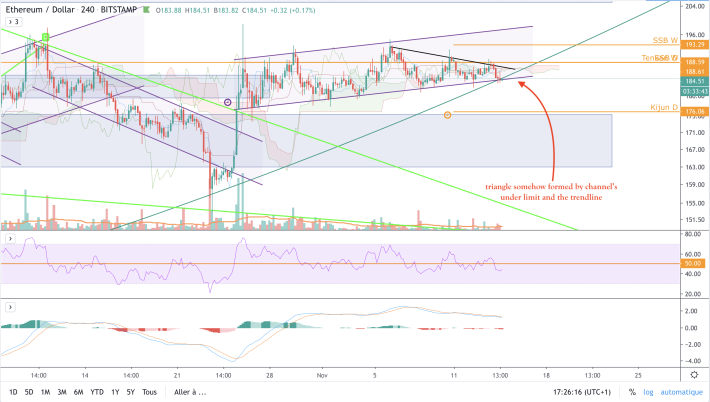 And if we check closer, we can clearly analyse the movement of the price into its upward parallel channel where the price was sent after triangle's break up. At this moment, it formed a symmetrical angle between bottom of the channel and the trend line visible in black. In case of a break out, this could help the price face Tenkan W & SSB D and stay in the channel, giving also the advantage upon Ichimoku's cloud, but still facing SSB W, a very strong resistance.

Also Chiku Span just went under the price and all 4h resistances. This shows how this break up will be difficult, but as it may be strong (on a short term view!). 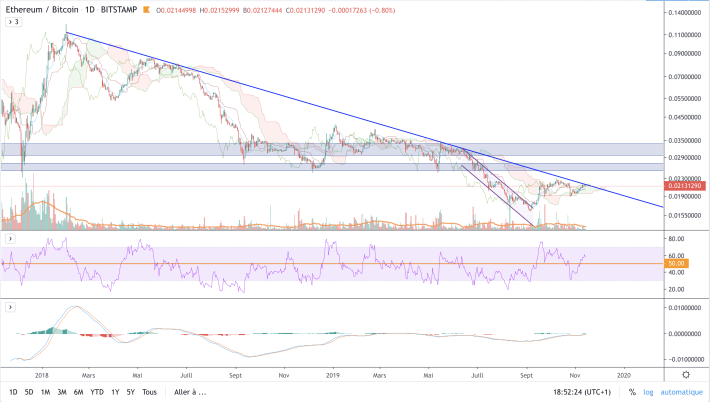 Here we're facing a new really important position. While gaining terrain again against BTC, ETH is now facing the very strong resistance that kept him low all this time against its cousin. It is maybe time to cut loose with the habits. Here's what to keep an eye on : 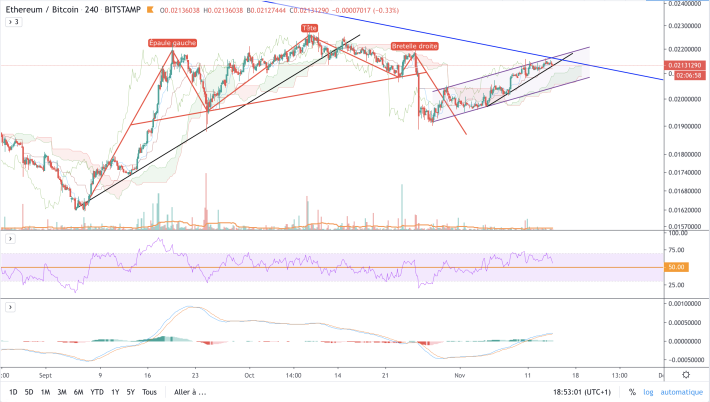 After the recent validation of the H&S formations, ETH came up forming a parallel channel. We now arrive at the critical point where both trend lines encounter, 4h and daily one. ETH may still fall under 4h one as the price may still be supported by the channel, but it would be its last hope for the actual movement to keep up. Then it will have to wait again a little to try again.

I still remain bullish for the moment on the overall market. But as time pass, stronger resistances come in the way. On the long term resistances are present, but they're really close to the price regarding the adequate time period and price movement. As on the short term I see lots of positive signs in the movement, this comforts me in the position that ETH has the ability to soon overcome those long term resistances.

Nevertheless, as we face more and more resistances, I get prepared to get out of the market quickly and in that case I'll analyse the next entry doors, where people set up their lower stop losses. Zulonga explained it very well in a previous article this year, this is why I won't expand on it and I strongly recomand that you read it.