My First Week of Staking Crypto! 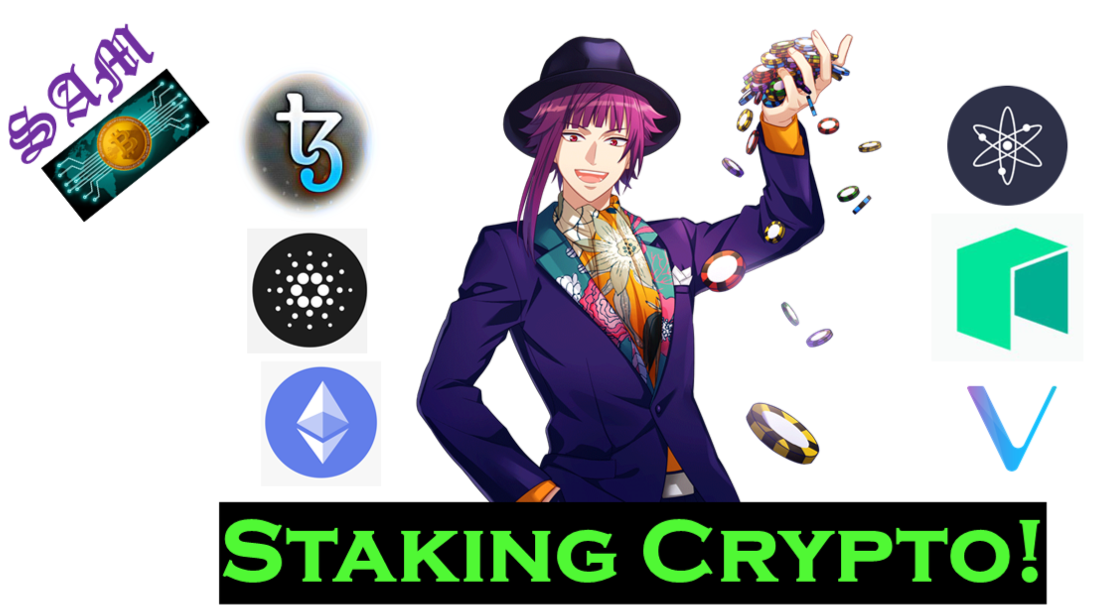 My First Week of Staking Crypto!

If you have been reading my recent posts, you would have definitely noticed that I have become totally obsessed with the idea of Crypto staking.

This started accidently when I was checking out the Atomic wallet and noticed they have an entire section dedicated to staking and had more than 10 coins which were available for staking. Some of them were familiar names like Tezos and Cosmos while there were some I had not heard of before like Algorand and Komodo.

I had been planning to try out crypto staking for quite some time now but always kept deferring it as the process seemed very tedious. Joining a staking pool or handing over control of your coins to a third party seemed very risky. The only coin I had staked so far was Tezos on my Coinbase wallet.

There was a huge list of coins available for staking on Atomic wallet, so let me share with you what is the staking procedure for them. The process is a bit different for each coin while some are easy and straightforward other are not so clear and some I think even have a few bugs which I hope will be fixed soon.

This is the landing page you arrive on when you select the Staking option in the wallet. As you can see there are many options available for staking and this list keeps growing as Atomic is adding new coins with staking functionality very regularly.

Which Coins did I stake?

I bought a few Atom tokens and put them up for staking and overall I really like the staking process. 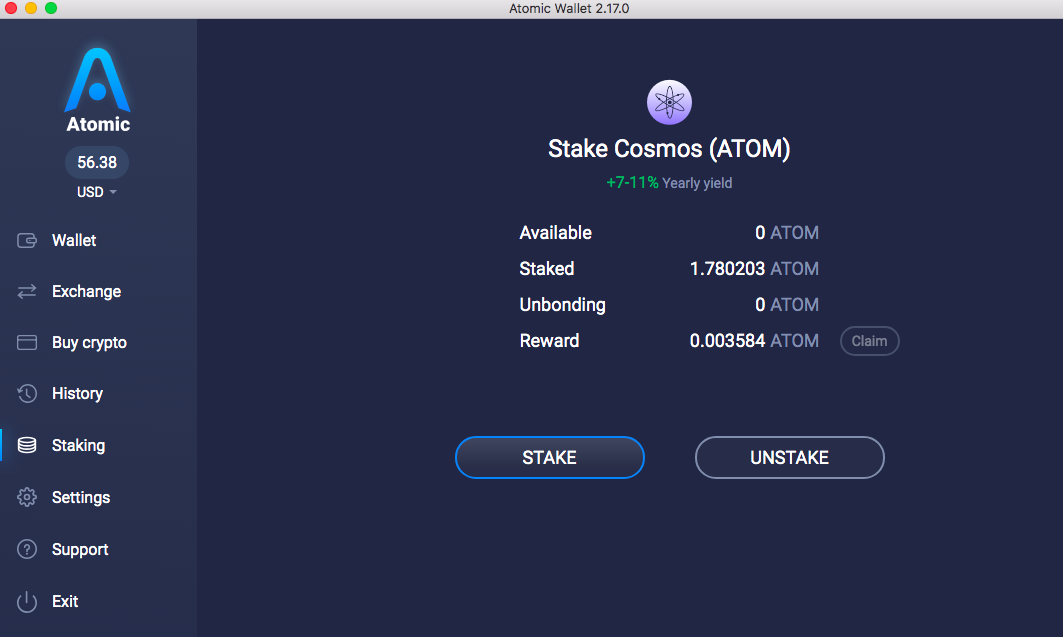 Locking- The staked coins get locked so Available balance shows as 0, this is OK as if I am staking with long term gains in mind I will stake the coins for a few months atleast.

Staking Rewards- I really liked that the amount of tokens generated as staking reward is regularly updated so you can monitor what is payout you can expect.

Yield Rate- It shows the rate would be between 7% to 11% and I had seen on the portal that the average rate is expected to be around 10% which will vary a bit depending on how long you stake and how much you stake. To me this rate seems pretty good

My Verdict- I really like the Cosmos staking option and have decided that once the token price corrects a bit I will stake more Atom tokens.

I moved some Tezos from my Coinbase account and staked them. As you can see the interface shows no details regarding what is the reward I have earned. There is just one message that the tokens are not frozen. 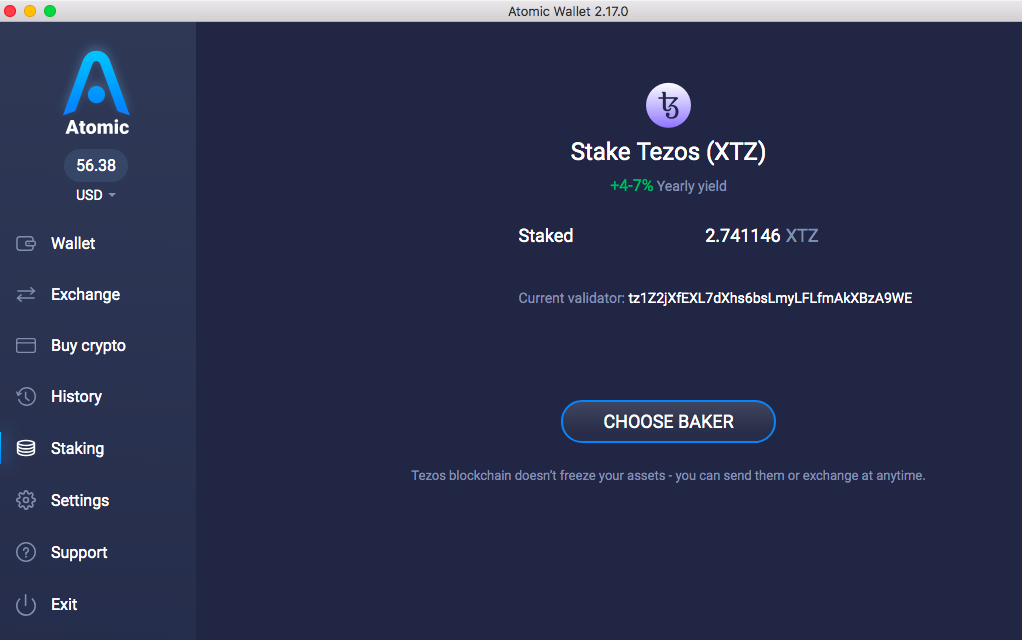 My Verdict- I did not like the staking option for Tezos on Atomic wallet and with it’s current interface I will not stake more here. I will continue to stake my Tezos directly on Coinbase and I am now checking the option of staking Tezos on my Ledger as it is a more secure wallet than Coinbase, specially as I will be buying more Tezos in the future.

I really liked the Tron staking interface. There are clear details about what are the rewards you have earned. The yield rate is fixed at 5% and Staking votes functionality is also available. 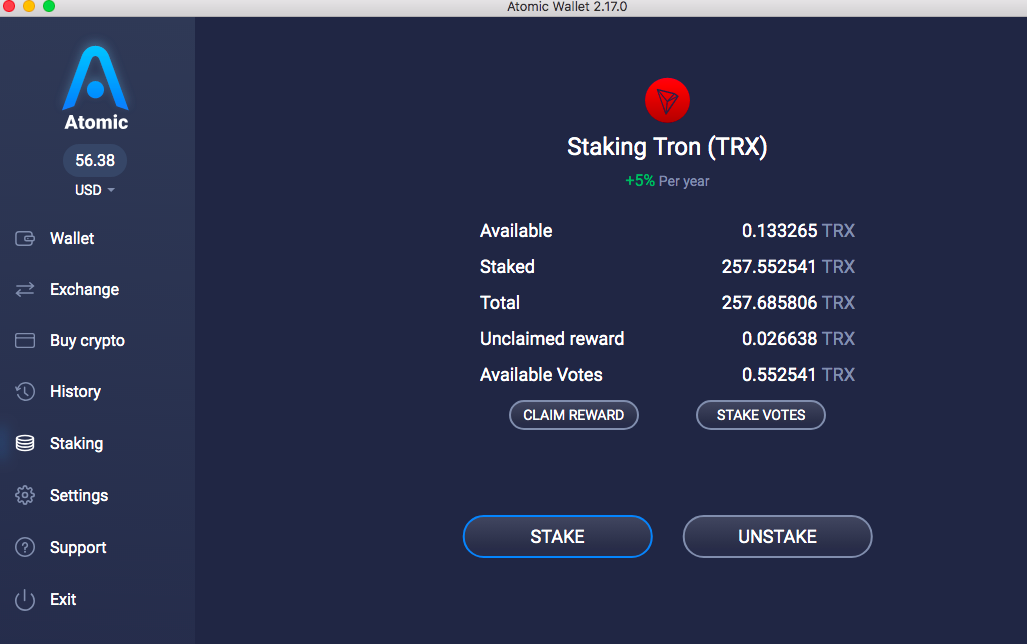 My Verdict- Though I liked the staking interface of Tron, I personally will not invest much into Tron for now. I know Tron has been growing a lot recently and many institutions are investing in it heavily and it seems to be on acquiring spree with the recent victim being Steemit. I don’t like Justin Sun as he doesn’t seem to be a very ethical person and for me that is important. I can not invest long term in a project which is being run by a person who is prone to corrupt practices.

Interface for staking BAND is very similar to Cosmos. The tokens get locked while you are staking them and the rewards accrued get updated regularly. The yield rate of 15-17% is really good. 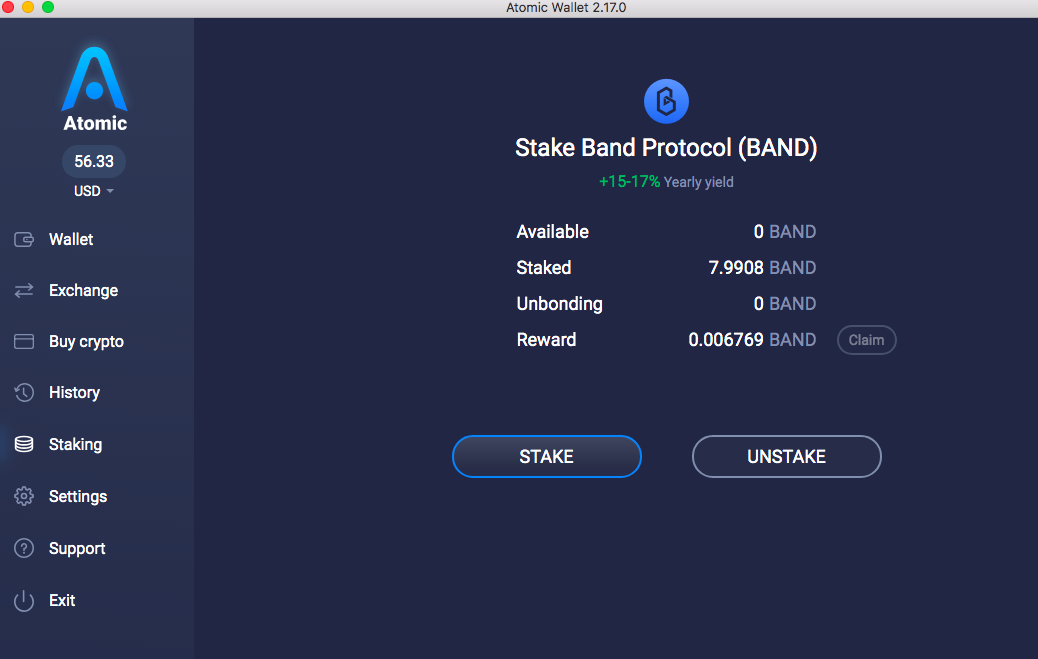 My Verdict- I really like the staking process and the yield rate is very high. With my initial review it seems like a genuine project but I need to do some detailed research before I decide to invest in it.

Interface is very clear and the tokens are not locked. You can see the rewards you have collected in ONG tokens. 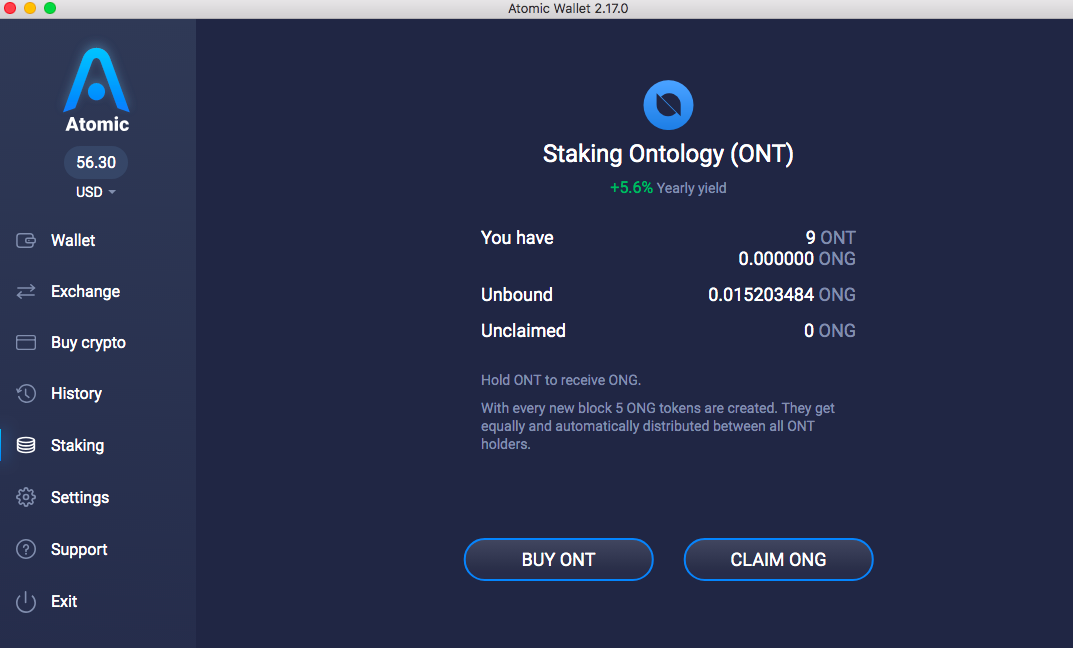 My Verdict- The staking process is very clear but the only part I did not liked was that for staking ONT tokens you get rewarded in ONG tokens and I need to check where can I sell these if required and whether it will be a simple process or not. This is on hold for now.

NEO staking interface is very similar to ONT and you get rewarded in an alternate token called GAS. I need to check what is the process to sell GAS and how practical is it. 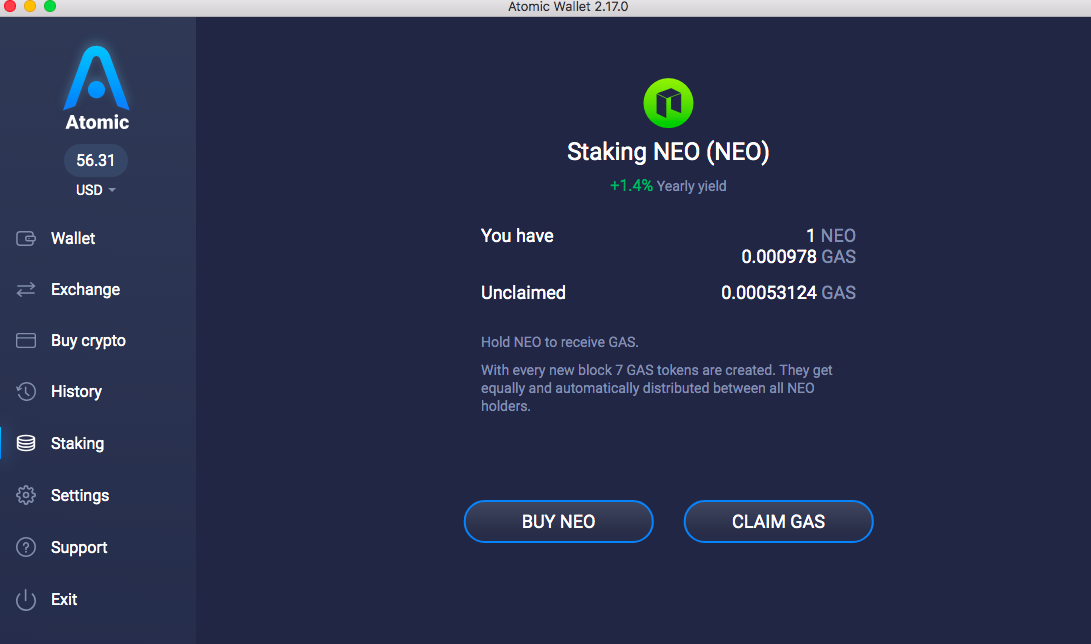 My Verdict- The staking rewards rate for NEO is very low at 1.4% and from what I have researched so far NEO is mainly a Chinese counterpart for ETH which will face a lot of competition for Cardano. Between Cardano and NEO I will definitely pick Cardano specially since Cardano will soon be available on Atomic for staking.

I had been researching about Komodo for quite some time and was really excited when I saw it in the list of tokens which can be staked on Atomic. Unfortunately it doesn’t seem to be working, for me at least. I followed the instructions they have mentioned of transferring 10 KMD tokens but so far nothing seems to be happening. 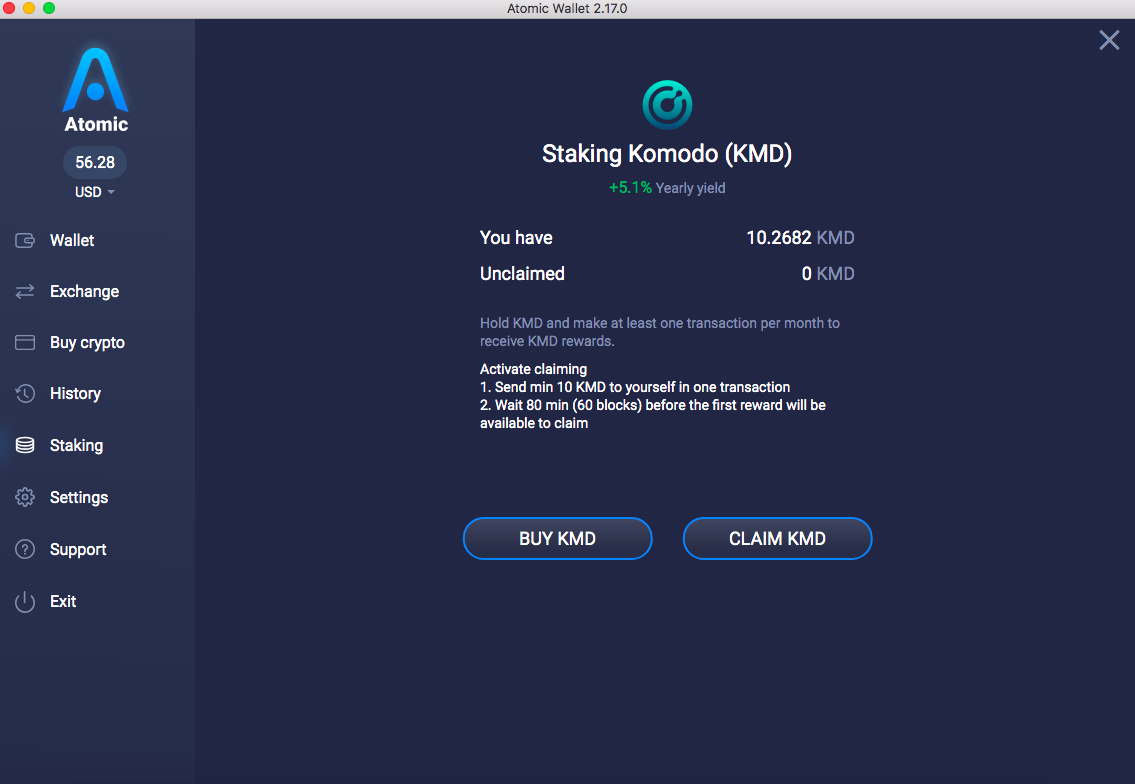 My Verdict- I am going to wait a few days and if I still don’t see any rewards I will contact the support center.

I have been hearing amazing reviews about ALgorand, how this will be a really technically sound product as it has been designed by experts from MIT. The moment I saw this as an option in Atomic I decided to stake some coins. 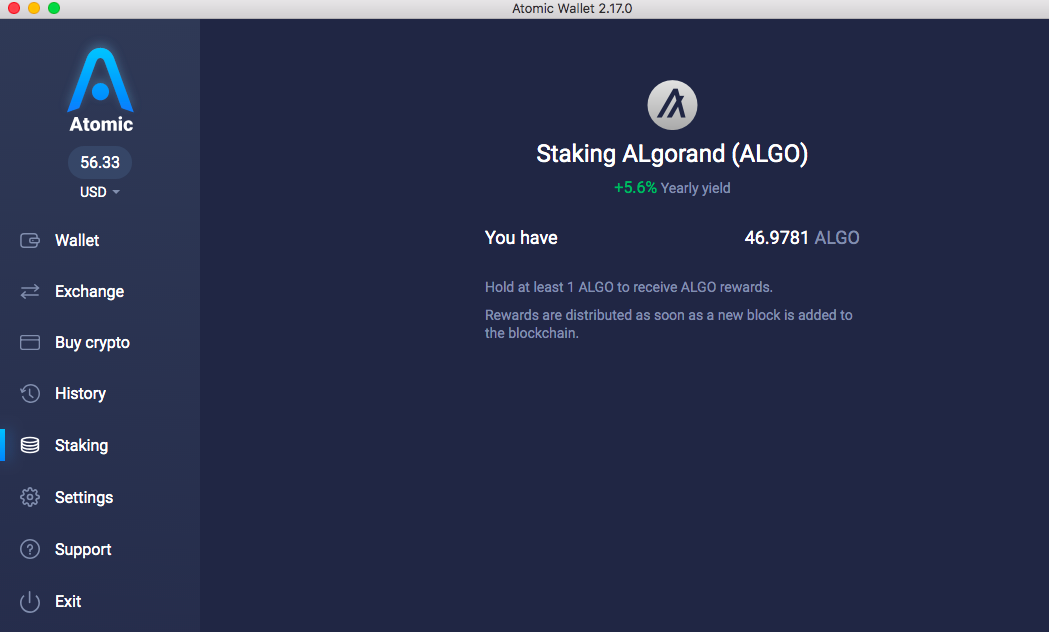 My Verdict- The good thing is that the staking feature works and the coins I invested last week have grown a bit (very small bit) by now, but the challenge is there is no indicator what were the rewards given. It will be useful if Atomic can add a similar indicator to what has been put in place for other tokens.

Vechain is another project which I had been planning to invest in for quite some time. I have already staked some coins and I know that the 1.6% yield rate is very low but that is not an issue as I was anyways planning to invest in VET so anything extra I get is a bonus. My only concern is that the reward is in VTHO and not VET. 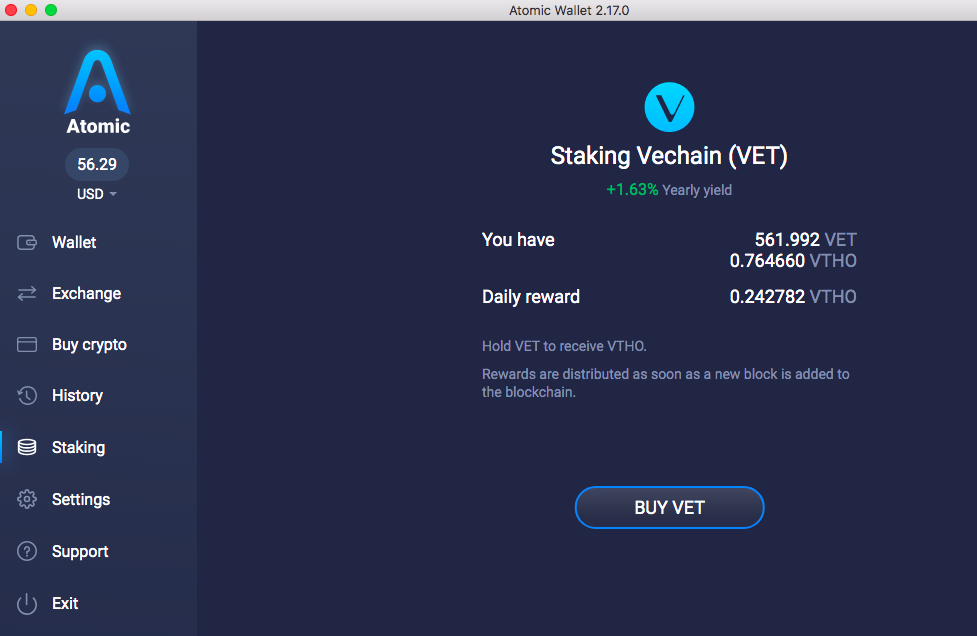 My Verdict- I am going to check about options to sell VTHO and if it is an easy process I will proceed to invest more in Vechain.

STAY SAFE! From Coronavirus and from Crypto Whales!