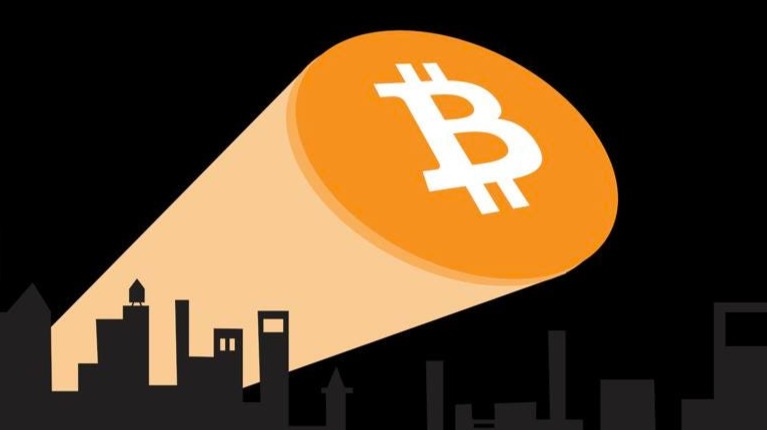 BITCOIN BEGINS: The epic origin story, coming soon to a theater near you!

Imagine going to the local AMC or Cinemark to see that flick you've anticipated for months.  Perhaps it's the latest Marvel superhero team-up.  Or maybe it's the newest installment in the infinite Fast and Furious franchise.  Or heck, maybe it's Trolls 15: When Hairy Met Sally.

At any rate, you are comfortably reclined in your theater seat, your feet are up on the seat back in front of you, your over-priced jumbo-sized popcorn and soda are within reach, and you are ready to shut out the outside world for the next two to three hours.

You've already seen twelve previews (so you've got about a dozen left to go), and you find yourself wondering why Hollywood can't come up with anything original anymore.  But then something on the screen makes you sit up and take notice.

A massive spotlight shines the image of a golden coin onto the underside of a cloud in the middle of the night.  The face of the coin displays a large B with vertical lines coming out of the top and bottom.  A crescendo of rolling thunder mixed with drums rises in intensity, then...

Jump cut.  A crowd of terrified people parts to reveal a wickedly grinning man wearing a bright green suit and bowler hat.  Strange symbols adorn his suit and hat, including a diamond, an atom, and an alphabet of stylized letters.  His eyes are masked by an angular purple infinity sign.

A man in the crowd lets out a terrified whisper - "It's the HODLer!" - and the villain's evil grin grows wider.

The scene changes. We find wealthy playboy socialite, Satoshi Wayne, strategizing with his trusty butler, Alt-fred.  "Master Wayne," the loyal manservent announces with alarm, "There's been a hack at Arkham dot Finance.  The Matic Hatter, ScareCro, the Pangolin, and Gentleman Fantom are but a few of your fearsome foes who are confirmed to have escaped!"

"I'm going to have to jump back into the pool once more," the Caped Cryptsader growls, donning his cowl and stalking off with purpose.  "Time to go yield farming."

Cut to the middle of the city in turmoil.  There is chaos in the streets and explosions in the distance.  Two figures stand out amidst the people running and screaming while bits of debris float down from the sky.  One of the figures turns to reveal a man who has been horribly scarred on one side of his body.  He laughs maniacally as he repeatedly flips a coin.  A gorgeous redhead with incredible tokenomics snaps at him.

"Ku-Face!  Why do you hold on to that relic of the past?  The future is in the blockchain!"  She throws her arms jubilantly up to the sky.

"How exactly am I supposed to flip a Dogecoin, Poison Aave?" the deformed degenerate snarls back.

We get a quick action shot of Satoshi driving through the streets in the Bit-mobile (a Lambo, of course).  Alt-fred's tinny voice comes over the radio.  "Should I contact Commissioner Gordon, Sir?"

Close up headshot on Bitman as he grimaces heroically and answers, "There IS no commissioner.  We live in a decentralized world, remember?"

The movie trailer is quickly coming to a close, so we see a rapid-fire montage of dramatic quotes.

A profusely sweating man slams his laptop shut and desperately vows, "I will NOT be rugpulled again!"

A woman on her knees breaks into tears and cries pathetically, "Proof of Work or Proof of Stake?  Don't make me choose!"

A bespectacled elderly man with a mustache solemnly advises a young girl in pigtails, "It's not the alpha we deserve, but it's the alpha we need right now."

BITCOIN BEGINS looms in large font on the screen, and as the thrilling soundtrack fades, an awed hush permeates the theater.

The mood is then broken completely by an arrogant teenager shouting, "What's next, the NFTeen Titans?"

If you like my writing, please consider tipping me here and leaving a comment, and if you want to read even more, check out my books on Amazon!  The first one is called Learn Me Good, and it's all about rookie teacher Jack Woodson who goes through a baptism of fire after leaving his engineering job and teaching a rowdy group of third graders.

And to any Hollywood execs who may be reading this, I am totally willing to sign over story rights for a mere 42 ETH.  Call me.  We'll do lunch.