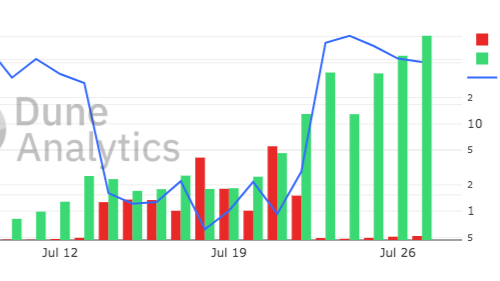 Are you confused by the title?

I don’t blame you.

The chart above shows that from June 27th to July 27th, AMPL managed to increase by a total of 157%.

So, what the heck? Where is the 4000% ROI coming from? Are you asking how this is even possible?

This might take a second but hear me out. In a nutshell, Ampleforth literally hacked crypto tokenomics forever. Let me explain...

A New Era Of Multi-Variable Assets

You see, Ampleforth has literally flipped the entire structure of a market totally upside down. They have broken all of the rules that have been set by practically every trading market for centuries and have created a tokenomics structure that will pretty much change the future of cryptocurrency as we know it today.

Up until now, every single cryptocurrency or token that we have traded has its market value derived from one free moving variable - the price. When the price goes up, the market value goes up and vice versa. The supply always remains constant in these single variable assets such as Bitcoin and Ethereum.

On the other hand, Ampleforth has swooped in with an entirely new tokenomic structure that introduces a second axis to derive the market value - the supply.

In the Ampleforth system, the supply is constantly changing on a daily basis depending on the current price. This is a type of tokenomic model that has never been seen before in the history of cryptocurrency.

Ampleforth is designed to be stable at around 2019 CPI-adjusted US Dollar. If the price for AMPL climbs above $1.06 then the supply of AMPL experiences what is known as a rebase at the end of the day. In this rebase, everybody who owns AMPL in their wallet will see the number of AMPL (the supply) increasing.

Let me quickly break it down for you.

During the day, the price increases to an average of around $1.56. This means that the price of AMPL is higher than the targeted price and therefore a positive rebase of 5% (at $1.56) will occur.

I recently wrote a piece on Ampleforth that showed a lot of important on-chain data from Santiment regarding Ampleforth that could help to track the growth of the network.

Today, I’ve found this extremely cool dashboard that shows some more AMPL metrics and decided to write some sort of a follow-up to my previous article with the new data.

First off, many thanks to 84Philipp for putting this together and you can feel free to donate to him at the following address as a token of appreciation (even $1 makes a difference - remember this IS crypto);

First up we have the Total Supply Over Time;

Total Supply for AMPL over the entire history of the project

We can see that, since the AMPL inception, the total supply never went above the 70 million AMPL level for the majority of its lifespan. It only managed to break the 100 million AMPL supply level on July 13th when the rebases started to increase.

Let me ELI5 this for you just in case you are still slightly confused.

This is not a process of mining in which miners are finding blocks. This is not also a process of staking in which stakers are rewarded tokens. No. Instead, this is an entirely new elastic supply tokenomic structure that Ampleforth created themselves. IF the price is above $1.06 we will see a positive rebase.

Well, the price went above $1.06 on June 24th - one day after Ampleforth opened the Geyser as an incentive program - and it has been going up ever since. This means that every day since June 24th, AMPL holders have been gaining positive rebases on their holdings every single day!

Let that sink in…

Let us take a look at these rebases that have occurred over the past 30-days;

Rebases for AMPL over the past 30-days

Over the past 30-days, there have been a total of 18 days in which AMPL holders were receiving positive rebases that were over 10%. In fact, one-third of the last month saw AMPL holders receiving over 15% rebases.

Crazy right? 10% pretty much every day is added to your wallet. Kind of overwhelming almost...

Just for reference, the following chart shows the rebases historically since AMPL launch;

Historical Rebases for AMPL from inception to present

We can see that, although there have been some positive rebases in the past, they never amounted to anywhere near 10% rebases. We have only started to see these positive rebases since the Geyser incentive program opened.

Since the opening of the Geyser, the total number of swaps on AMPL has consistently increased every single day as more people jump on board;

AMPL Uniswap V2 Swaps Per Day - May 24th to Present

In fact, just yesterday, July 26th, we reached an all-time high in the number of swaps per day as it topped out at 6,850 swaps!

This growth in people entering into AMPL since June 26th can also be seen in the increasing number of daily transactions per day;

Daily Transactions for AMPL from June 30 to present

The number of daily transactions surpassed 100 million for the first time ever on July 26th showing an increased interest within the project.

For a more accurate representation for the number of people entering into AMPL we can also look at the total addresses per day;

New Addresses Per Day - Start of AMPL to Present

Next, let us move onto perhaps the most interesting indicator of the bunch - the number of tokens bought/sold per day over the past month;

Tokens bought/sold per day over the past month

Just eyeballing the chart above we can see that there is an overwhelming level of buying compared to selling. We can also notice that from July 14th through July 22nd there was quite a lot of selling going on. During this time, we can see the ratio between bought/sold dropping heavily as some sellers appeared on the market.

However, the important thing to notice is that, since July 22nd, this selling pressure has pretty much completely disappeared. The ratio is back to its highs as over 9 million AMPL were bought on July 26th whilst only 177K were sold.

This shows that there pretty much is absolutely zero selling pressure right now. People are pouring their funds into this totally new asset type and it seems that this is also going to continue substantially over the next few weeks. To put this into perspective I would just like to wrap up by showing you the Uniswap V2 volume; 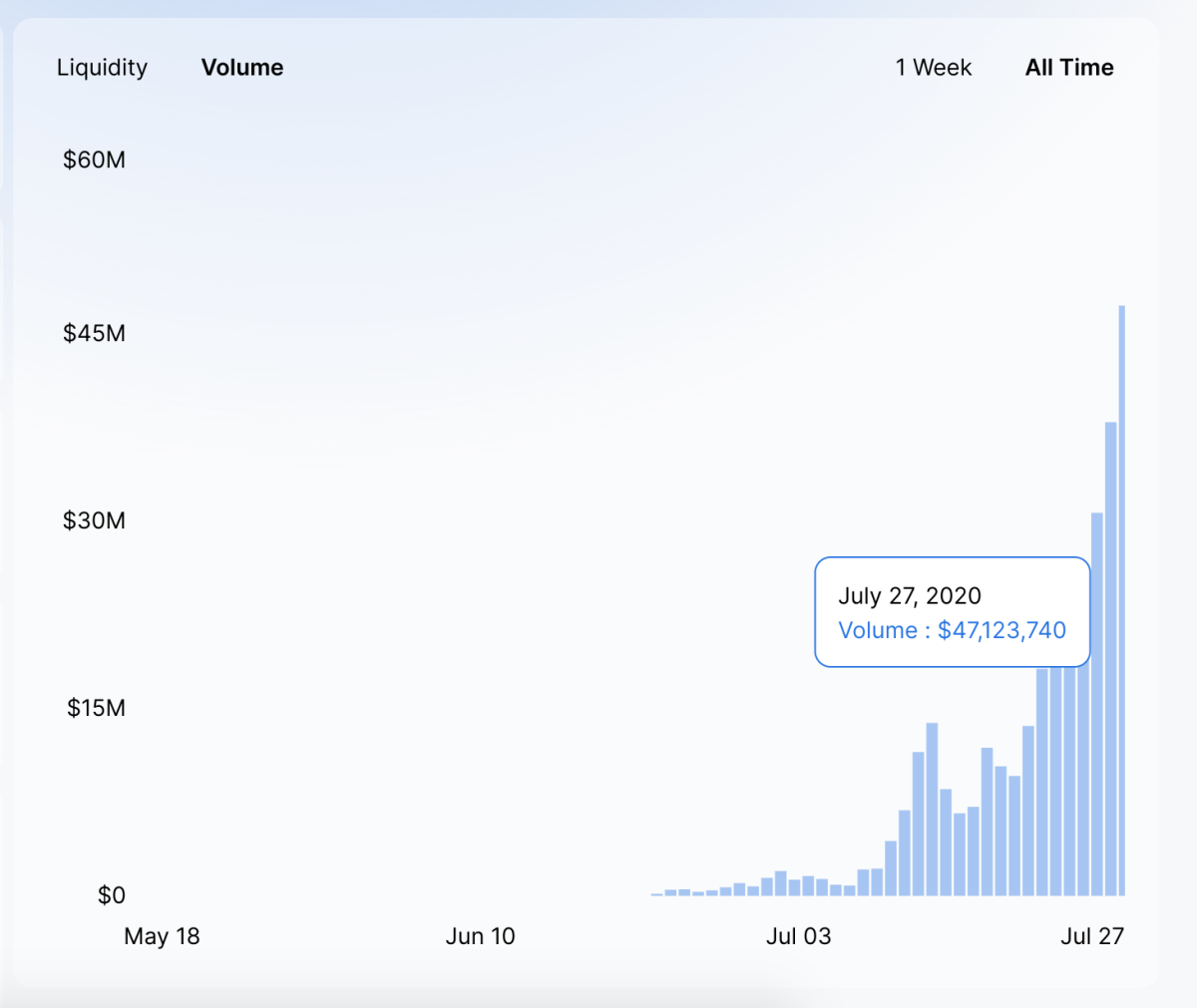 We can see that, since late June 2020, the volume has been steadily increasing. However, over the past few days, it has exploded to reach as much as $47 million traded volume in just one single day. With the growth metrics that we have seen above, we can only expect this to continue as more people are introduced to AMPL. This is without even mentioning that we aren’t even on any major exchange just yet.

This is certainly just the beginning of a very unique and special rollercoaster and we can expect more passengers as people realize how revolutionary this elastic supply based cryptocurrency is.