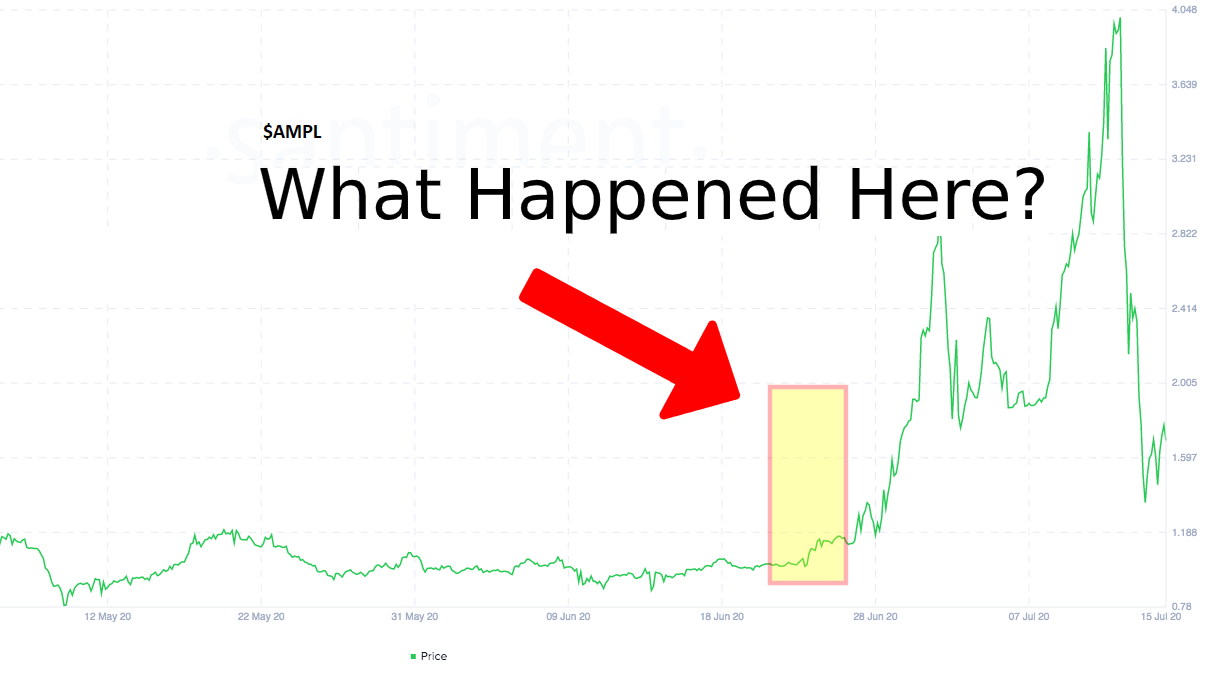 - All data for onchain analytics comes via Santiment Pro, we highly recommend this tool to get a little alpha where others aren't looking ;) -

It has been a while since I have posted anything at all and that is because I have spent quite some time digging through a bunch of these new DeFi projects that have suddenly flooded into the scenes. One in particular that has taken much of my time offers something quite different from any other cryptocurrency I have seen thus far. The project I am talking about is Ampleforth.

Ampleforth is likely to be the hottest new thing in the cryptocurrency industry and its unique characteristics seem to have everybody intrigued. As the latest product in the DeFi category, Ampleforth is completely different to every other cryptocurrency that has come before it when we consider the fact that the supply for the token is totally elastic. This means that the total circulating supply will change over time according to the algorithm laid out in the Ampleforth codebase.

Imagine a line where to the left is FIAT with an infinite supply and Bitcoin aligned to the right with a fixed supply. AMPL would be exactly in the middle of it.

As the cryptocurrency is particularly buzzing right now, I decided to take a look into the Social & On-Chain Metrics provided by Santiment to get further insight into what has been occurring as of recently and have laid out my findings below.

The day Ampleforth Made Headlines

Price Of AMPL Over Past 3 Months (Source: Sanbase)

The chart shows the price of AMPL over the past 3-months of trading. We can see that the coin was underneath the $1.18 level for the majority of the year, until the end of June when it broke above and started to push further higher.

Something inside this yellow box made AMPL explode over the following weeks after it.

In fact, we can clearly see that AMPL started to explode significantly from here as it surged past the $2.00 level to reach $2.82 in the first week of July. The coin continued higher during July to reach as high as $4.00 before it rolled over and headed back to the $1.50 support.

But, what exactly happened to cause this price explosion?

The details are all inside the highlighted yellow box.

You see, the yellow box, specifically June 23rd, is the date that the Ampleforth team released a Liquidity Rewards Program for any participants on the Uniswap liquidity pool. This incentive program was called Geyser and it was the catalyst that pushed AMPL higher over these past few weeks.

The release of the Geyser caused Ampleforth to hit the mainstream crypto news websites;

Interestingly, Ampleforth released their incentive program just 8 days after the distribution of the $COMP token from the Compound Finance platform. The release of $COMP sparked a strong wave of interest into DeFi and it seemed that Ampleforth managed to take advantage of this by simply being in the right place at the right time.

In fact, amid $COMP launch, defi related terms started to reach the all-time high levels of interest in Google, and Ampleforth had the best timing for Geyser launch. 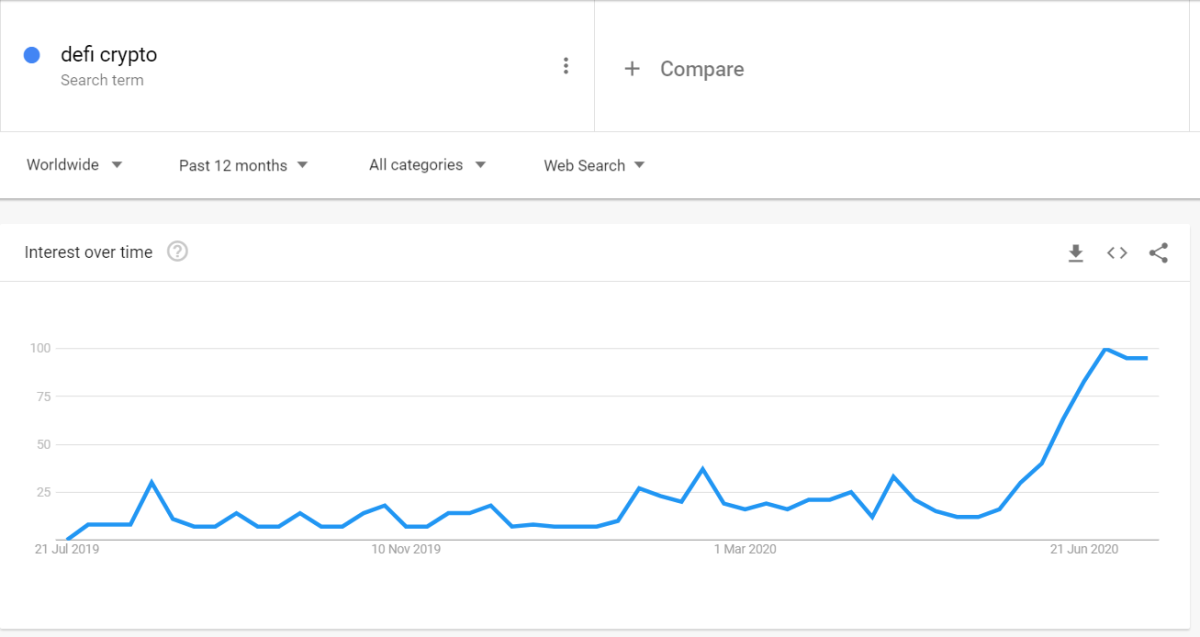 The next interesting metric that I would like to discuss represents how Twitter reacted to the launch of the Geyser.

The following chart shows the total number of Twitter Followers for Ampleforth over the past 3-months;

The total 24HR Twitter follower change is drawn in brown whilst the price of AMPL is drawn in green again.

What is interesting about the chart above is the fact that the number of Twitter followers was skyrocketing over the course of few days before the price of AMPL itself mooned.

With that name and Geyser buzz, I'm pretty sure they gained some National Geographic type of followers on Twitter: @AmpleforthOrg

This Twitter indicator was a green light for anyone who paid attention to the metrics.  This is no surprise to me (hindsight) as a cryptocurrency such as AMPL is a harder nut to crack as compared to other projects, mostly because of its unique supply mechanics.

What Has Been Going On Recently With The Price?

Price Of AMPL Over Past 3 Months (Source: Sanbase)

Well, the price of AMPL has been on a rollercoaster recently. After breaking above the $1.18 level toward the end of June, the coin surged to reach as high as $2.82 in the first few days of July. Over the course of the month, the coin managed to reach a spectacular height of $4.00.

If you have come here for a price analysis - you might be a little disappointed. In all reality, it is kind of pointless to be looking at the price for each individual AMPL. Instead, you should be keeping your eyes on the total market cap for AMPL in this particular project. If the market cap continues to rise, you can sit comfortably knowing that your AMPL holdings are appreciating.

You need to remember that the price for AMPL is ELASTIC. This means that it changes every 24hours according to the current price. You see, AMPL is designed to target the $1 level by adjusting the supply of coins inside everybody’s wallet. If the price for AMPL is above $1.06 then the supply will increase in a positive rebase and the tokens inside your wallet will also increase.

On the other side, if AMPL is beneath $0.94 the total supply will constrict and the number of tokens in your wallet will also decrease.

This mechanism incentivizes AMPL to head as close to $1.00 as possible each time there is a particular surge like we have seen during July 2020. AMPL climbed as high as $4.00, there was a bunch of positive rebases and the number of tokens increased in users’ wallets. They are then incentivized to sell their AMPL to bring the price back toward $1.00 - which is exactly what has happened over the past few days.

One important metric to highlight that has caught my attention over the past couple of days is the fact that the amount of AMPL held by top addresses continues to increase - despite the dramatic price drop from $4.00 to $1.30.

Amount of AMPL Held By Top Addresses Over Past 3 Months (Source: Sanbase)

Looking at the chart above, we can see that the amount of AMPL held by the top 10 holders was relatively static throughout the majority of the year before June. The brown line represents the amount of AMPL held by top addresses whilst the green line represents the price for AMPL. In fact, it even remains pretty static after the announcement of the Geyser when AMPL started to rise to $2.80.

However, as AMPL continued to surge past $2.80 (the first highlighted yellow circle), it seemed that the top AMPL holders wanted to increase their holdings of AMPL. This caused the total number of AMPL held by them to surge - despite the fact that the price was continuing to increase.

Simply put, as long positive rebase occurs - holders have as more AMPLs in their wallets the next day, as long as its oracle price stays above ~$1.06. More details on the left chart here: https://www.ampleforth.org/dashboard/

The last important metric that I feel I must highlight is the fact that the Developmental Activity for Ampleforth continues to rampage itself also. This metric by Santiment tracks the total number of pure development-related events that occur in the GitHub. Importantly, non-developmental work like comments and forks are not counted in the calculation of the metric. This makes it more accurate that the events that are counted are actually codebase change events;

Developmental Activity for AMPL Over Past 3 Months (Source: Sanbase)

Looking at the chart above, we can see that the QNT team was extremely active during April 2020. Interestingly, the developmental activity does not rise too much on June 23 when AMPL released the Geyser. However, the interesting part is the fact that Developmental Activity has skyrocketed over the past few days as it reaches the all-time high levels again. This shows that, even though the team recently launched the Geyser incentive program, the team is still committed to improving its protocol further.

This wouldn't be complete without a look at the network growth. There are now 6149 total ethereum addresses holding AMPL, up from approximately 1000 at the time of the geyser liquidity incentive launch. Wallet growth is now circa 1000 new daily (but to put this in perspective SNX has 8000, BAL has 5000, but older project like REP (Augur) have 20,000 - so AMPL seems to have caught up to other new/hot defi projects, but still has a long way to go compared to some of the real older and larger projects).

Ampleforth is an extremely interesting project with a very different economic model from any other project. The release of the incentivized program in the Geyser caused a significant surge in social volume for AMPL which resulted in the price for the coin to skyrocket during July. The fact that the top AMPL holders have seemed to increase their holdings during this recent drop to $1.30 shows the level of confidence that they have in this particular project.

Lastly, if you are concerned about its recent drop in $ price. Well, firstly, Ampleforth is designed to behave like this and eventually find it's market cap and stabalize to $1. But if you are a budding researcher then you need to look more at market cap than $ price because of the daily rebase supply change.

- All data for onchain analytics comes via Santiment Pro, we highly recommend this tool to get a little alpha where others aren't looking ;) -