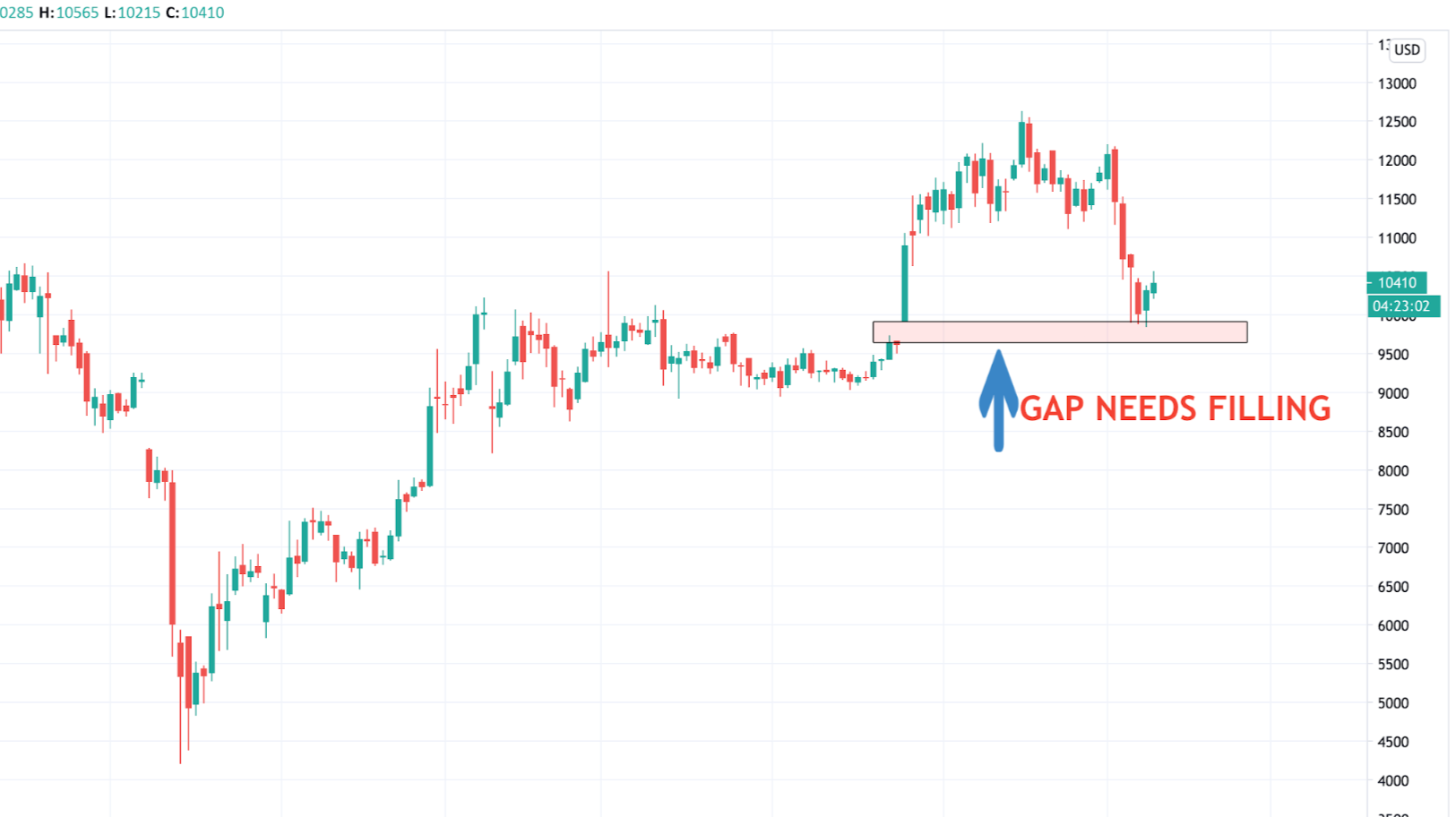 BTC, ETH & XRP Price Analysis - Where Are We Going?

The cryptocurrency markets have been in a state of consolidation since Bitcoin dropped from $12,000 to hit $10,000 this past week. Let us look at what is going on with the Bitcoin fundamentals and continue analyzing the markets for BTC, ETH, and XRP.

Over the past 30-days, Bitcoin has dropped by a sharp 11%. The cryptocurrency had reached as high as $12,352 earlier in August, but it ended up rolling over from here to head lower. In September, Bitcoin underwent a precipitous price drop at the start of the month as it fell from $12,000 to reach the $10,000 support level.

The bulls have been battling to defend $10,000 since reaching here, but there is still potentially some more downside action on the way.

In particular, there is a CME futures gap that analysts are referencing at $9,600 that needs to be filled; 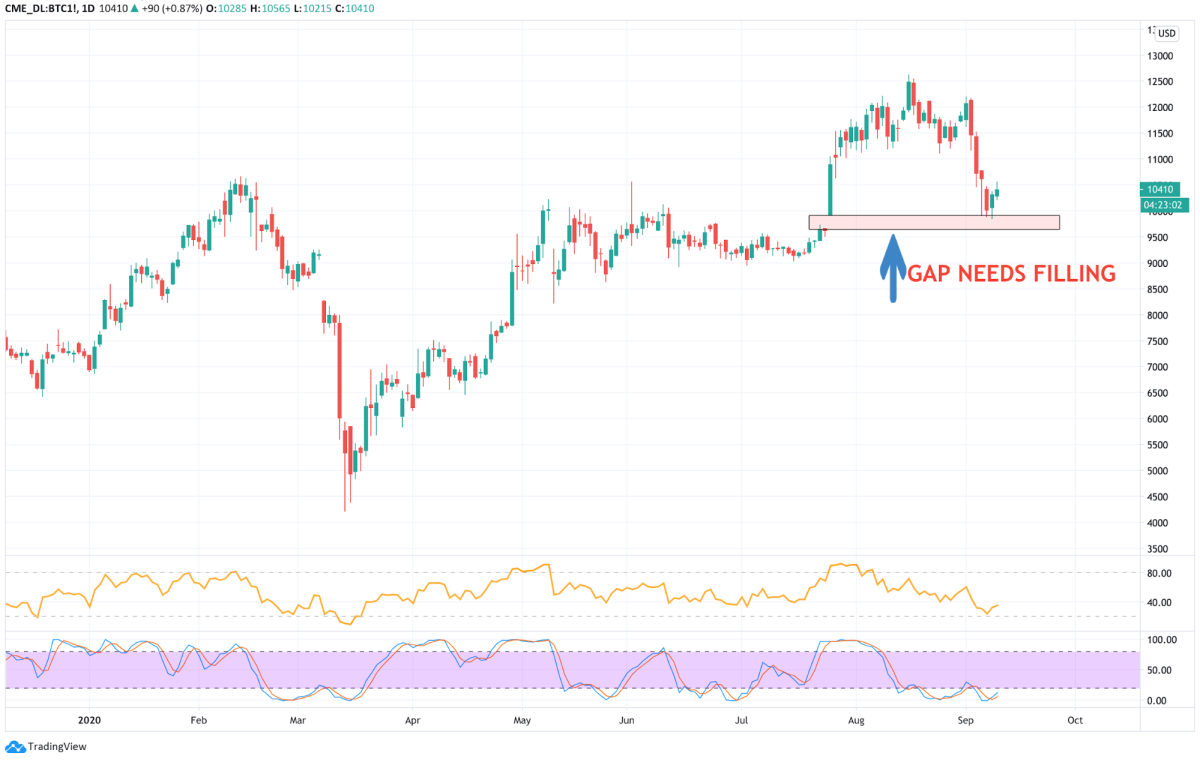 Interestingly, this $9,600 level is also supported by the 200-days EMA and is also the termination location of a head & shoulders pattern that penetrated beneath the neckline during the September price drop.

There is data to suggest that Bitcoin’s strength has been coming from US Dollar weakness over the past few months. This has also helped Gold climb to fresh highs as it eye-balls the $2,000 level again. The 60D correlation between Gold and Bitcoin is now at the highest it has been on record;

While the US Federal Reserve continues to pump out fiat currency through Quantitative Easing, we can expect this correlation to continue throughout the following weeks, which should be a good sign for the Bitcoin bulls.

Despite the recent price drops, it seems that the number of BTC Addresses HODLing 1 Bitcoin has also hit fresh all-time highs. It appears that there are now a total of 823K wallets with at least 1 BTC inside;

Data from Santiment backs this up as the total number of Daily Active Addresses for BTC continues to rise - indicating that people are taking advantage of the recent price drops to load up on some coins;

However, one thing that we must remain wary about is the fact that the NVT is peaking;

Anytime the NVT spikes, it indicates that the market is slightly overvalued and might need to correct lower.

With this in mind, let us take a look at the markets for Bitcoin, Ethereum, and XRP and analyze some areas of support and resistance ahead. 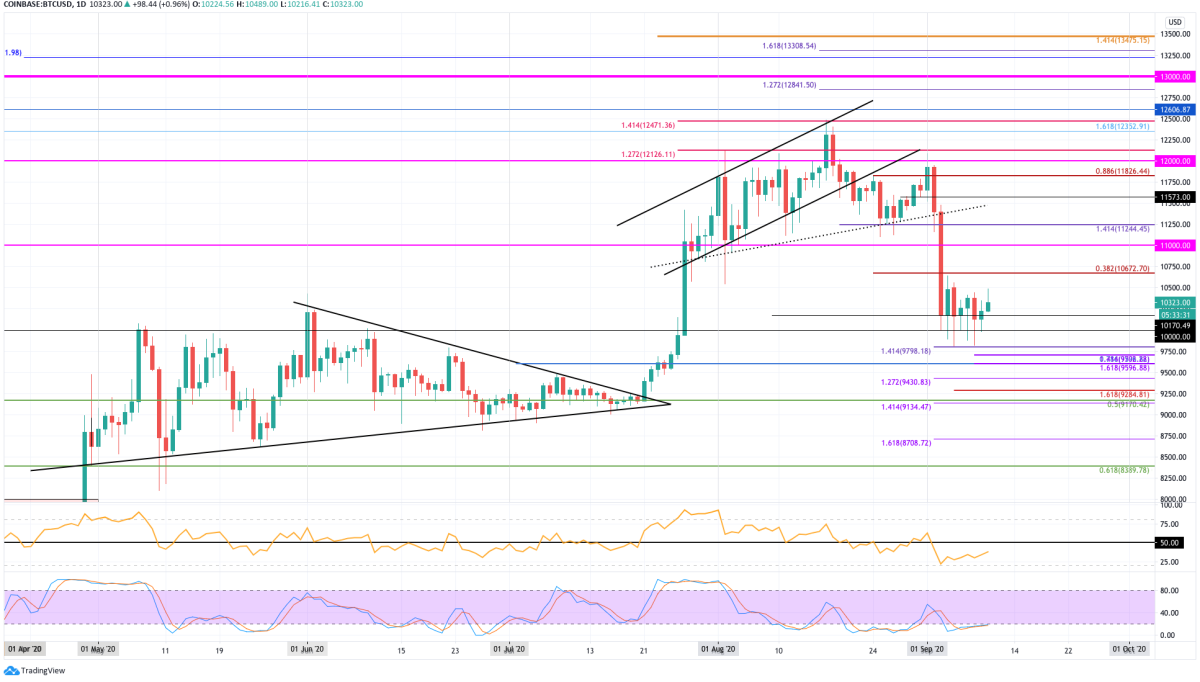 Considering the daily chart above, we can see Bitcoin reaching the $12,350 level earlier in August. This was highlighted in my Q3 prediction article here. At that time, Bitcoin was trading within an ascending price channel.

Unfortunately, the sellers caused Bitcoin to roll over from here as they went on to break beneath this price channel. They found support at $11,250 toward the end of the month and rebounded to reach as high as $12,000 again at the start of September.

This is where Bitcoin took a turn for the worst.

Yesterday, the buyers attempted to rebound from the $10,000 as they pushed the market as high as $10,400 today. However, they still seem to be struggling with a consolidation pattern that can be seen on the hourly chart below; 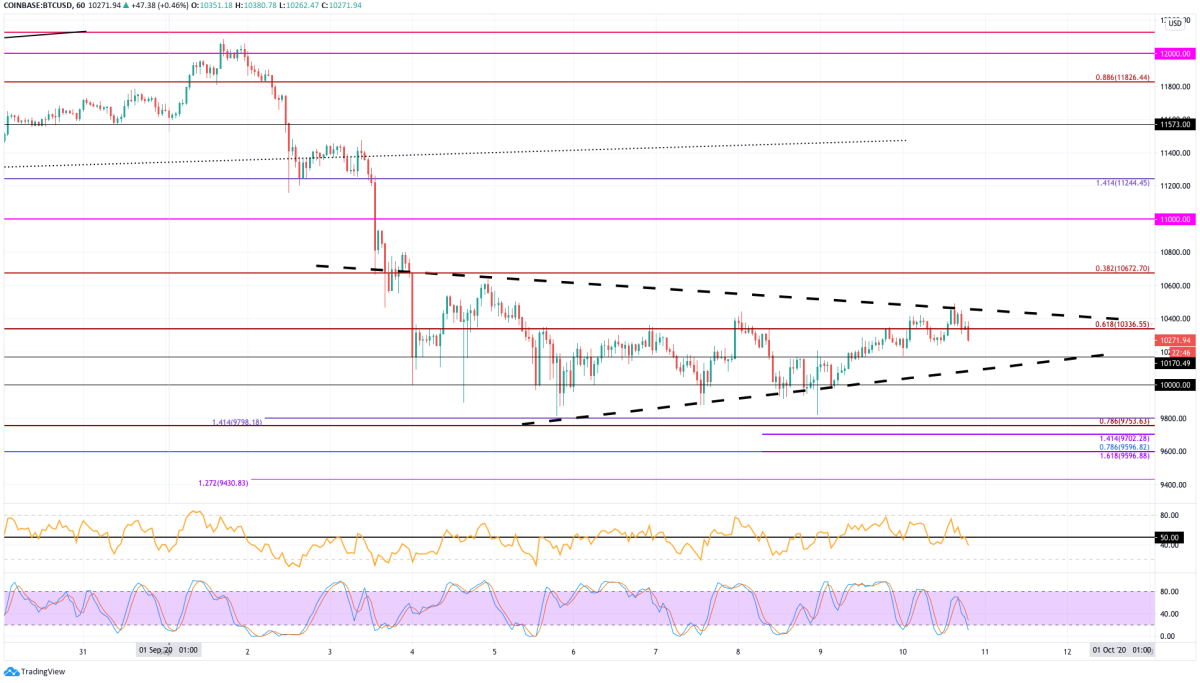 You can see the dashed black line highlights the period of consolidation. It is known as a symmetrical triangle pattern, and the buyers are struggling to break the upper boundary of this formation. Each attempt to break the upper edge ends up in a reversal with Bitcoin heading lower from there.

Typically, these symmetrical triangle patterns resolve themselves in the direction of the previous move - which, in this case, is bearish.

Right now, we are neutral. The coin would need to penetrate AND close the daily candle beneath the $10,000 level to turn bearish in the short term. A further break beneath $9,170 would see Bitcoin entering a more extended phase of price declines.

To turn bullish in the short term, Bitcoin would need to make its way above $11,000. A further break above $12,000 would result in a more sustainable bullish trend.

It is important to note that the RSI is beneath the mid-line as the buyers are in complete control of the market momentum. For a sign that the selling pressure is fading, look for the RSI to start to rise back toward the mid-line. 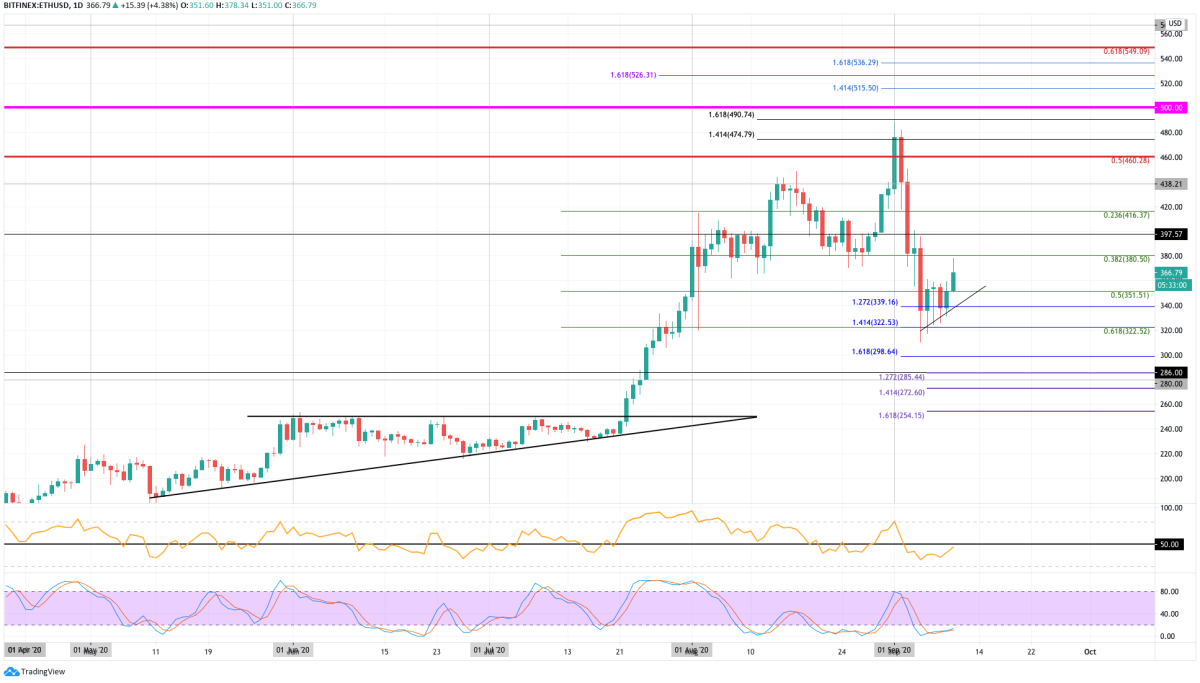 Ethereum is in a similar boat to Bitcoin - but has started to see some form of a rebound before Bitcoin has bounced itself. Toward the end of August 2020, Ethereum dropped into the $380 level and reversed from this support. It continued to climb in August until resistance was met at $490 on September 1st, 2020.

From there, the Bitcoin price drop caused the entire cryptocurrency market to come down with it - Ethereum included.

Initially, Ethereum managed to find support at the .382 Fib Retracement level at $380 again. However, the bulls could not defend this level of support as the sellers continued to push Ethereum further lower until support was found at around $339 (downside 1.272 Fib Extension).

The buyers did end up defending this level of support (with intermediate spikes below) as they went on to push higher and rebound toward the $380 level. ETH has since fallen slightly as it trades at around $366.

Ethereum is also considered to be in a neutral trading condition right now. The coin would need to climb above $400 to turn bullish in the short term with a more sustainable bullish run after it breaks $480.

On the other side, if Ethereum were to drop beneath the support at $322 (.618 Fib Retracement), the market would be considered bearish.

The RSI is approaching the mid-line for ETH/USD. This shows that the previous selling momentum is starting to fade. However, it is essential to wait for a push above the mid-line before we suspect any bullish momentum. 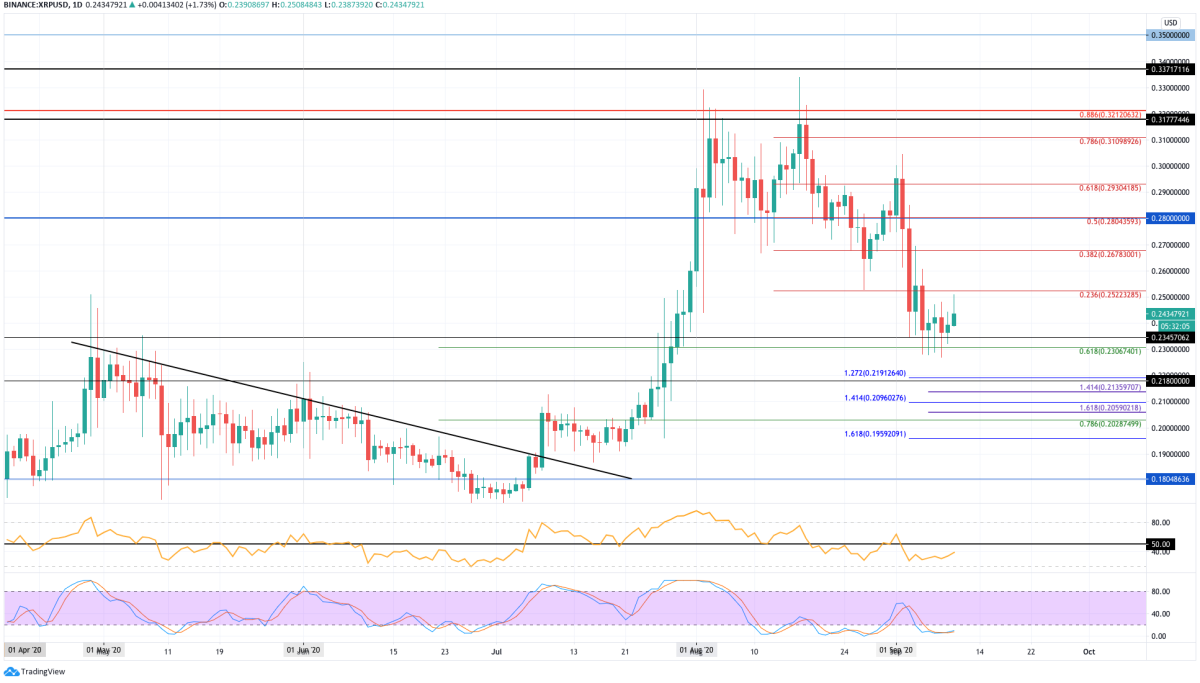 After pushing beyond the $0.23 level at the start of August, XRP managed to go on to reach as high as $0.317 before the sellers stepped in and pushed the market lower. It spiked higher at the start of September as it reached the $0.3 level. However, this was short-lived as the Bitcoin price collapse caused XRP to head lower into the $0.234 support zone.

The buyers have defended this level of support over the past week and are attempting to rebound higher from here.

Like the other top 2 coins in this article, XRP is also considered to be neutral. The coin would have to rise beyond the $0.3 level to turn bullish. On the other side, a break beneath the $0.23 level is likely to turn XRP bearish in the short term.