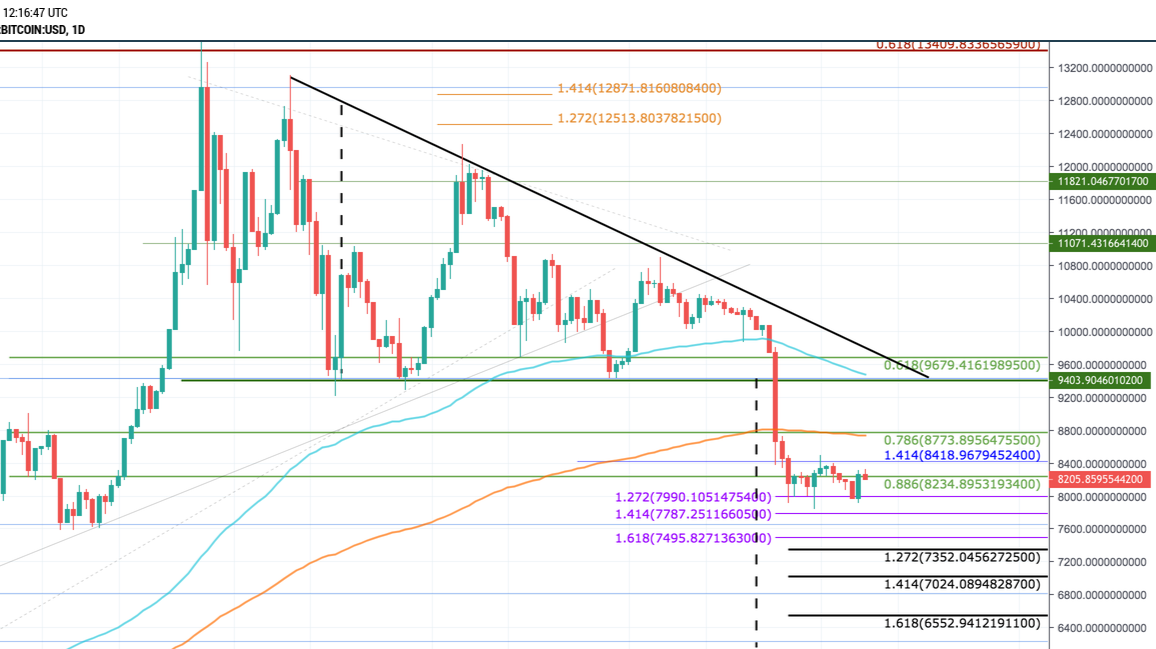 Septemeber was an interesting month for the cryptocurrency markets after the entire market cap fell by around $70 billion, dragging the current total market cap of the entire industry down to the $222 billion level. This market breakdown was largely attributed to Bitcoin falling beneath a descending triangle pattern, resulting in the cryptocurrency falling from above $9,400 to where it currently trades at around $8,000. 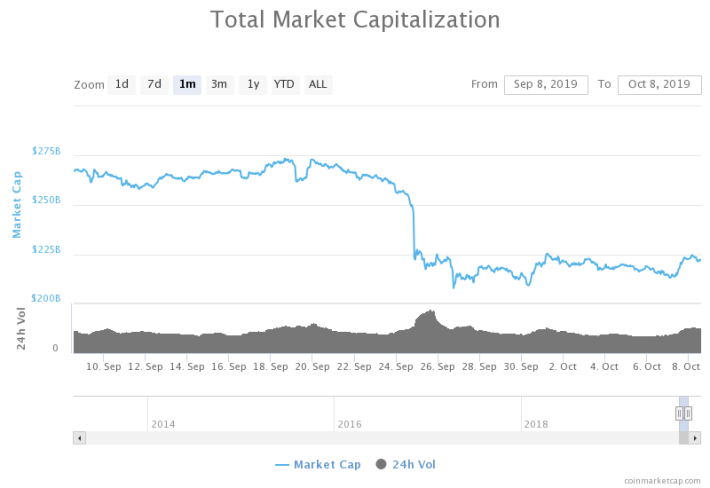 However, the Bitcoin price breakdown has allowed some altcoins to start to reverse against BTC. Cryptocurrencies such as Ethereum and XRP have both started to reverse in their BTC markets and are on the cusp of starting a major rally in their respective Bitcoin pairings. This is promising for the altcoin industry as they have been riddled with downward pressure through the entire period of 2019 and are long overdue a reversal.

Whilst Bitcoin dominance is falling, dropping from above 70% to the current rate of 66.6%, this presents a wonderful opportunity for altcoins to reclaim some of the BTC losses that have been present in 2019 and could even help to kick off the elusive and much anticipate “AltSeason”.

Bitcoin - Beneath Consolidation, Headed To Completion At $6,100? 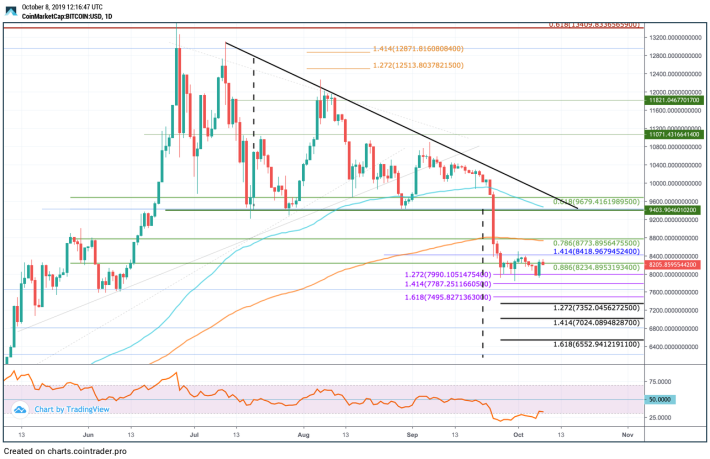 Taking a look at the daily chart above, we can clearly see the breakdown of the descending triangle consolidation pattern toward the end of September 2019. Bitcoin fell beneath the lower base of the triangle at around $9,400 and continued to plummet further lower until finding support at the downside 1.414 Fibonacci Extension level at around $7,990. In reality, Bitcoin has pretty much been trading sideways between $8,400 and $8,000 so far during October.

The breakdown of the consolidation pattern was a serious move and should be considered as a major trend shifting price leg lower. From a technical perspective, over the long term, a breakdown of the triangle should result in Bitcoin price heading much further lower to complete the pattern at around $6,100.

What If The Bulls Regroup?

The RSI has recently rebounded from extremely oversold conditions. This shows that the selling pressure has eased slightly since the breakdown of the triangle. For a sign that the selling momentum is fading, we will look for the RSI to start to grind slowly higher toward the 50 level. For a bullish recovery, we would need to see the RSI climb and break back above the 50 level.

Ethereum - Reversal Against BTC In Play To Bring ETH Above $200? 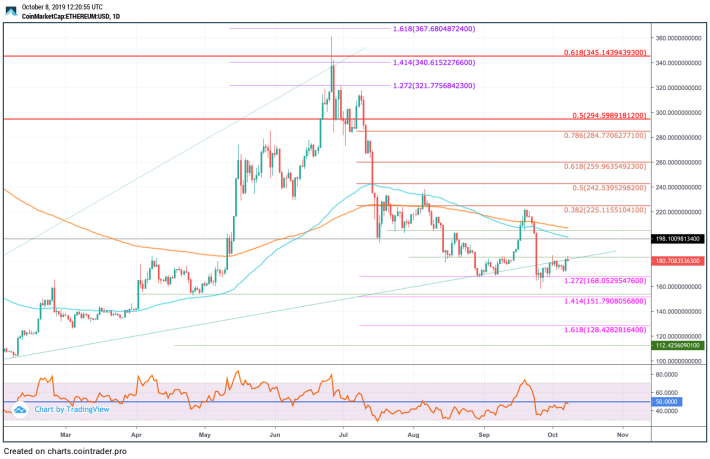 Ethereum has started October in an interesting position as the cryptocurrency attempts to break above the $180 level. During the September Bitcoin price breakdown, Ethereum had plummetted from above $220 to fall as low as $168, where support was found at the downside 1.272 Fibonacci Extension level.

Since finding this support, Ethereum has rebounded and is slowly grinding higher. This has largely been possible due to the fact that Ethereum is showing promise and is climbing against BTC (covered next).

The rate of ascension for Ethereum will depend on how quickly ETH can rise against BTC and, also, how stable Bitcoin can remain itself.

The RSI is currently involved in a battle with the 50 level. This shows that there is currently indecision within the market at this moment in time. If we would like to see Ethereum rise above $180 and head toward $200, we would need to see the RSI breaking back above the 50 level to show that the bulls are in charge of the market momentum. 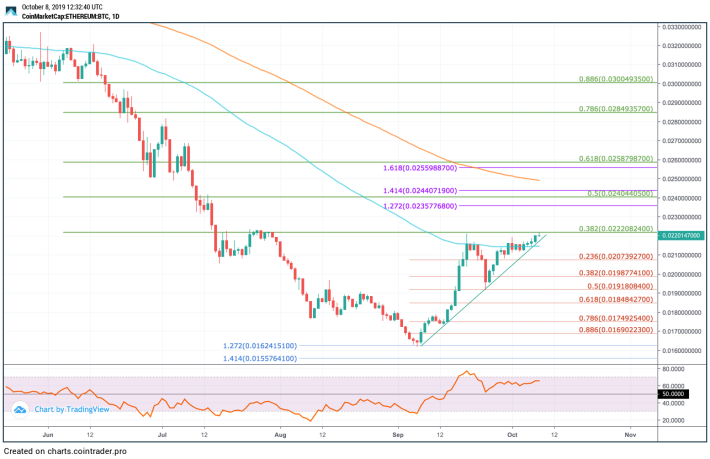 Taking a look at ETH against BTC above, we can clearly see that Ethereum had been suffering from June through to September. The cryptocurrency had fallen from a high above 0.032 BTC and continued to plummet as low as 0.01624 BTC when support was found at the downside 1.272 Fib Extension during September.

Since reaching this support, Ethereum has rebounded and has started to grind higher against BTC during September. The cryptocurrency has risen rapidly, increasing by a total of 36% since rebounding, as it breaks above the 100-day EMA and currently faces resistance provided by the bearish .382 Fibonacci Retracement level priced at 0.02220 BTC. This bearish Fibonacci Retracement level is measured from the June high to the September low.

Etheruem is now currently trading in a promising ascending triangle pattern against BTC. This consolidation pattern typically resolves itself toward the upside so we should expect to see ETH rise much further higher against BTC in October. 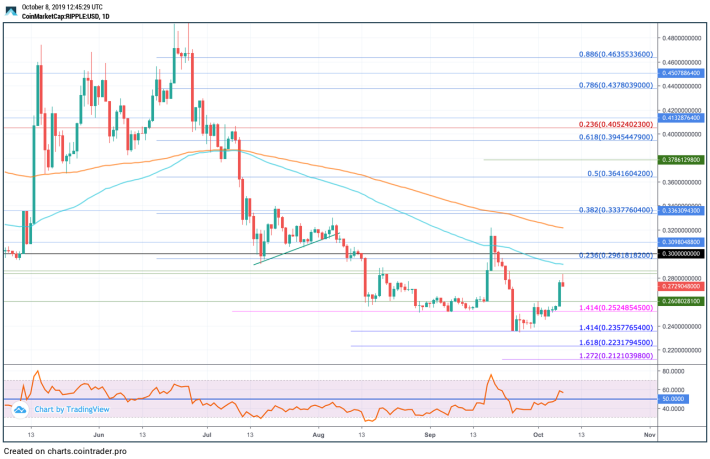 XRP began to crumble toward the start of August after the cryptocurrency began to break beneath the $0.30 support level which had been active throughout the entire period of 2019. After penetrating beneath $0.30, XRP continued to drop through September until support was found at the downside 1.414 Fibonacci Extension level at around $0.2357.

After reaching this support, we can see that XRP has rebounded and has started to climb higher during October. XRP has surged by a total of 8% over the past week as it looks to challenge the resistance at $0.28 and head back toward $0.30.

For XRP to rise against the USD, we would need to see XRP/BTC head toward the 4000 SAT level (covered next). 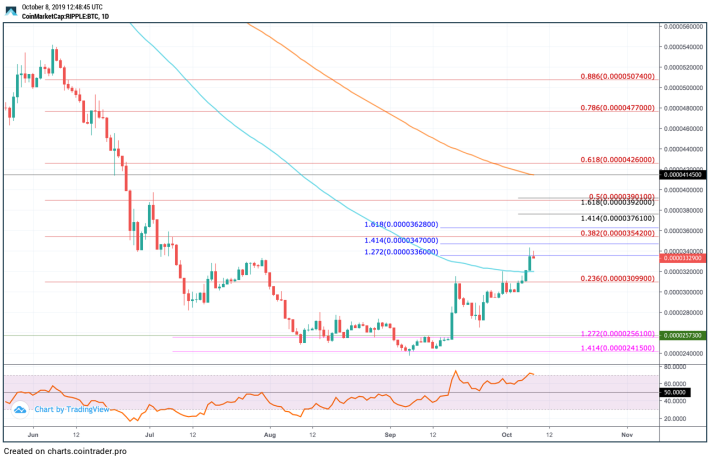 Analyzing the XRPBTC chart above, we can see that XRP had found strong support at the downside 1.414 Fibonacci Extension level priced at 2415 SAT. XRP rebounded from here and began to climb very quickly during September. The market had met resistance at the bearish .236 Fibonacci Retracement level priced at 3099 SAT, forming an ascending triangle pattern, and was unable to overcome this resistance in September.

However, as October started to trade, we can see that XRP penetrated above this bullish technical pattern and continued much further higher. XRP went on to break above the resistance at the 100-days EMA at around 3200 SAT and traveled further to meet resistance at 3360 SAT which is provided by a 1.272 FIb Extension.

So there you have it! It seems that as Bitcoin continues to trend downward, the altcoins are finally finding some salvation and are showing signs that they would like to rebound against BTC. Both ETH and XRP are starting to perform very well against BTC. Over the next couple of weeks, I would recommend to pay a little more attention to the ETHBTC and XRPBTC markets and see if they continue their trend higher as this should eventually translate into higher USD prices down the line once BTC stabilizes.