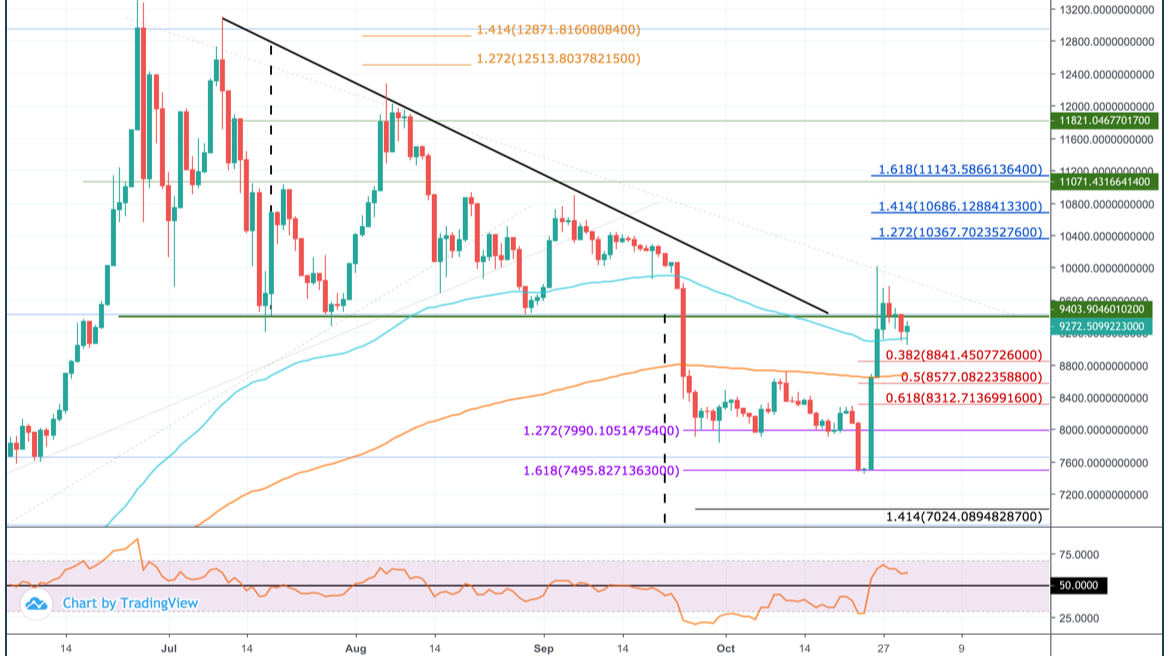 October brought some promise back into the overall cryptocurrency markets after the entire total market cap was able to grow by a total of $27 billion from $225 billion to $247 billion. This latest price jump came toward the end of October, saving the month from closing with otherwise previous stagnant sideways movement. 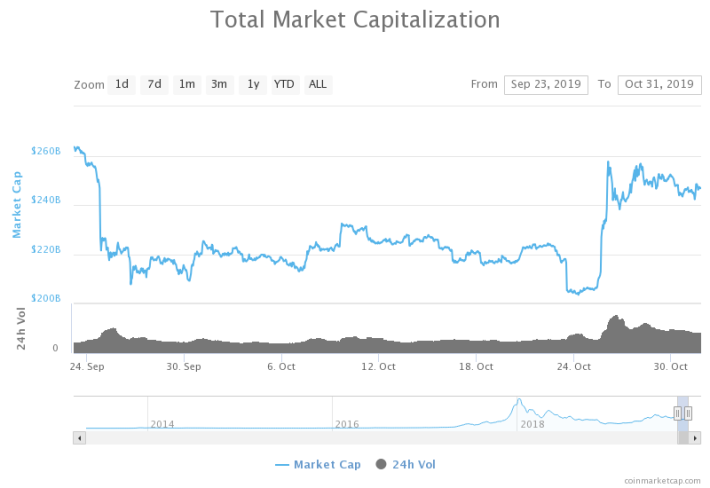 This has, hopefully, put the cryptocurrency markets back on the bullish footing as traders look toward further price increases during November 2019. However, the industry looks to be in a tricky situation as a breakdown of Bitcoin back toward $7,000 could leave the rest of the market in tatters. The good news is that we should have a clearer long term view of where the markets will be headed in 2020 after November has finished.

Let us take a look at the markets for BTC, ETH, and XRP and analyze any potential support and resistance heading forward.

Bitcoin - Will The Late October Revival Prevent BTC Dropping Toward $6,000? 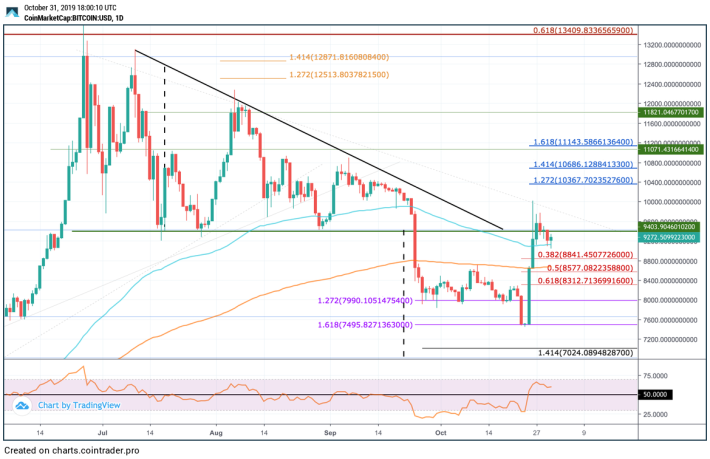 Bitcoin had seen an interesting month in October as the cryptocurrency has created a fresh 4 month low during the month. Bitcoin was holding strong above the support around $8,000 for the majority of the month, however, on October 23rd Bitcoin dropped beneath this support and headed into the expected lower support at $7,395 - provided by the downside 1.618 Fibonacci Extension level (drawn in purple).

Bitcoin rebounded after reaching this support and rocketed higher to form the October highs at $10,000. Bitcoin has since dropped off slightly as it now trades at the current support level at around $9,100 which is provided by the 200-days EMA.

The next few weeks of trading should help to dictate as to which direction Bitcoin would like to head toward next. During the late-October rally, Bitcoin did not get anywhere near the September 2019 highs of $10,800 and the market would need to create fresh highs above here to be considered as a bullish market. 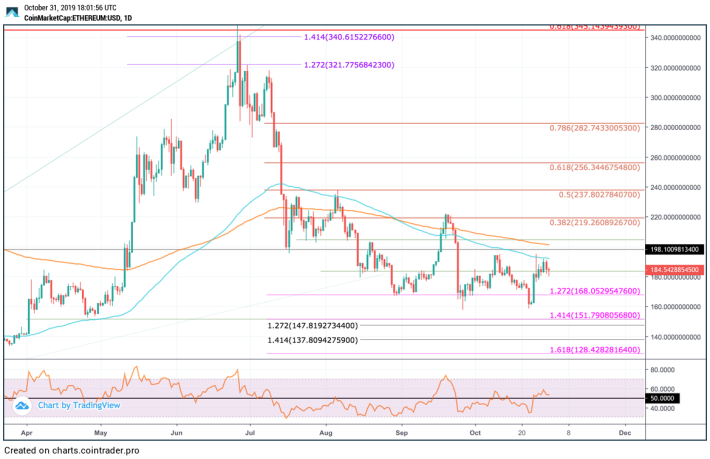 Ethereum has seen a pretty stagnant month of trading but the cryptocurrency has now established a strong range between the resistance provided by the 200-days EMA at $200 and the September support at $160. Similar to Bitcoin, Ethereum is now in a position where a break of this current range would dictate the overall medium-term trend for Ethereum over the next few months. A break beneath $160 could see Ethereum heading toward the $120 level but, on the other hand, a break above $200 could see Ethereum heading toward $256 in November and toward $350 in the following months.

What If The Buyers Regroup?

Alternatively, if the buyers can regroup and push Ethereum higher, immediate resistance is expected at the 100-days EMA at $190 which is followed with more resistance at $200 provided by the 200-days EMA. The market could be considered bullish in the short term If the bulls can push Ethereum above $200. 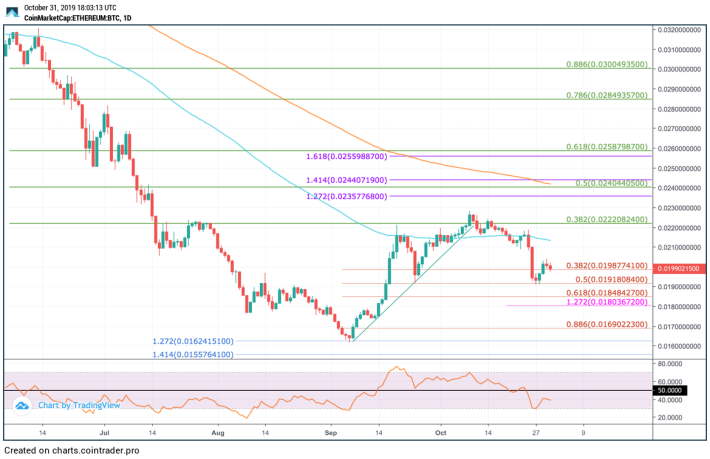 Since our past ETH/BTC analysis, we can see that ETH has slipped against BTC and started to fall. The market was unable to break above the resistance around 0.023 BTC which caused ETHBTC to roll over and head downward. ETH had recently found support at the 0.01918 level, provided by the .5 Fibonacci Retracement level, where a rebound was seen. Ethereum has since bounced higher as it trades at 0.0199 BTC.

Alternatively, if the sellers regroup and push the market lower we can expect immediate strong support at 0.01918 BTC. If the sellers break beneath this we can expect ETHBTC to trend further lower. Lower support is expected at 0.01848 BTC (.618 Fib Retracement), 0.018 BTC (downside 1.272 Fib Extension), and 0.017 BTC. 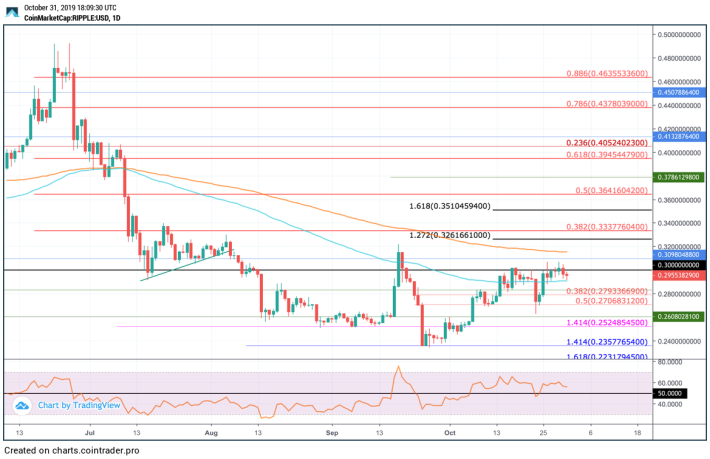 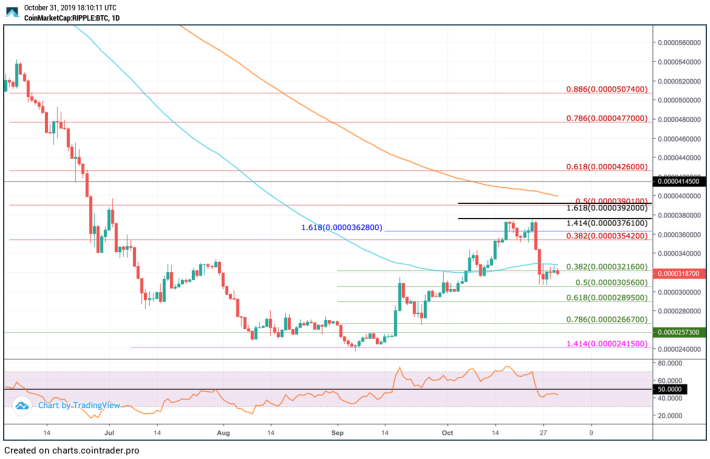 XRP has surged significantly since our last analysis, being able to break above the previous resistance at 3360 SAT and continue further higher to reach the expected resistance at 3661 SAT provided by the  1.414 Fibonacci Extension level. After reaching this level of resistance we can see that XRP rolled over and fell into support at the 3000 SAT level.

So these are my November predictions for the top 3 cryptocurrency projects! It will be an exciting month because once Bitcoin and the other Cryptocurrencies break the current ranges, we will have more of an idea as to which direction the market will be headed toward over the following months. If Bitcoin can head above $10,000 and continue to rise, this could help Ethereum break above $200 and XRP to break above $0.30 which will see the top 3 altcoins rise further higher.