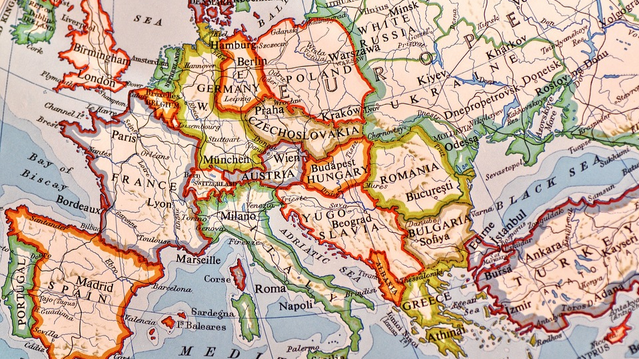 Note: This article is about using creativity to improve your problem solving skills, and approximately a 20 minute read. This is the third article in a series in which I teach you useful creative techniques to help you in your problem solving skills. It is a bit abstract, and involves higher level thinking, so it may not be for you. So to be upfront, here are the bullet points for it. If you want to skip my introductory “fluff” and get right to the creative technique I will talk about in this article, feel free to skip to the subheading “Creative Technique #3: Demographic Shift”. We are one of a kind You are one of a kind. Although there is approximately a one in 64 trillion chance that someone else will be born with your same genetic makeup, it's unlikely someone else currently exists that looks just like you. Mind-boggling, isn’t it? Additionally, there probably will never be anyone else who thinks exactly like you do. You're special because of how unique you are!

There are so many religions, nation states, sexual identities, languages, and other types of social constructs out there that we use to define ourselves. The odds of someone else sharing the same demographic background with you is quite small. Some of us are born as men, women, or feeling that how we look on the outside doesn’t reflect our true gender and sexual identity. Our journeys through life can be dramatically different than that of others.

Our demographic identities have a tremendous impact on the way we make sense of the world. The kinds of parents we have, the language we’re taught as children, and even our diet play a huge role in our problem-solving and decision making skills. We are all individuals, but the environments in which we are born into strongly influence our behavior. Our lens of the world, and consequently our locus of control is formulated by the various social groups that we are a part of. Even if we don’t “partake” of the surrounding social climate, it still has an impact on our decision making. And a big way in which we are influenced by the “pressure” of our demographics is quite subtle—unconscious biases, assumptions regarding various phenomena, value systems, milestones to strive for, and determining what are worthwhile uses of our time.

Demographics: People can be very different than one another Demographics refers to the categorization and segmentation of people—their geographic background, culture, belief systems, and biological differences. We are similar in many ways, but at the same time, we’re not! People differ in obvious physical ways such as age, gender, sexual identity, but also in more abstract ways. They differ in terms of the language they speak, their type of personality, and even their level of political identification. People can define and be defined in almost an infinite number of ways—the concept of identity is so dynamic and vast and fantastic. Understanding how people differ in terms of their demographic background is useful for better making sense and understanding how others perceive the world. How they approach life, how they deal with adversity, and even the behaviors that they engage in. It helps in finding ways to relate and work with one another. We are all in charge of forming our own identity. However, the prevailing norms and customs of the environment in which we were raised and are living in have a profound impact on how we go through life.

The impact that our demographic background has on our problem solving and decision making isn’t necessarily bad. Some customs and belief systems are very empowering, and actually quite encouraging in terms of building our self-worth, willpower, strength, and intuitive skills.

An issue arises when we think we’re being objective in analyzing a situation. We might think we’re seeing a situation objectively, but actually running on unconscious biases and assumptions we’ve picked up from our social circles and associations. For this reason, it is imperative for us to “check” ourselves and question our prejudices and biases from time to time. if we’re trying to be creative when trying to solve a problem, we have to get into the habit of challenging our assumptions.

My whole point here is about the value in checking to see how your demographic background might be limiting your perspective and take on things. It’s easy for people to fall into a trap of thinking that their culture or way of thinking is the “best” one compared to others. That isn’t exactly helpful to the creative and problem solving process. In fact, it’s quite detrimental, making us hold onto a way of looking at things. It’s easy to get stuck in a rut with an issue because of the way we were “taught” to look at things.

I would say most cultures have some socially approved “mechanisms” for how to deal with problems, that are subtly “encouraged” on to its members. These “mechanisms” can inform us in the amount of volition we’re permitted to believe we have, how much seriousness we can apply to a problem, and even the way we should feel about something. Some of those mechanisms are empowering. But when we deviate away from them, it’s easy to feel peer pressure from our cultural or social group. This creative technique is about becoming aware of your demographic background, and trying to consider how someone very different than you would see things. It's an imaginative exercise in which you contemplate how you would approach your problem if your demographic background was different—if you were born in another country, were younger, spoke a different language, followed a different religion, had a different income level, or were different in some other way. Truthfully, you can’t be completely certain how someone with a different identity than you would approach a problem, but at least contemplating it helps put you in a more imaginative and creative state. But the more open-minded you allow yourself to be, the more potential solutions you can come up for it.

Sample Problem: Figuring out which supplier for your wine production process to replace This creative technique calls for identifying your demographic background, and trying to imagine how differently you would approach the problem if at least one of your identity components (e.g. age, gender, sex, income, etc.) was different. You’re probably not going to be able to exactly determine how someone born on the other side of the world would approach your problem. However, contemplating it, and trying to be imaginative helps put your mind in a more creative state of mind. And the longer that you’re in a creative state, the greater the likelihood that you can brainstorm more ideas for solving a problem. Your age, gender, nationality, religion, computer literacy, etc. all have a profound impact on how you approach obstacles, and imagining what would happen if one of those aspects was altered can help you come up with a different approach for solving your problem.

Here are some steps that someone can take in order to help them envision how someone from a different demographic background than you would approach a problem.

If you’d like to keep on contemplating how someone of a different demographic background would approach the sample problem, there really is no limit. How would someone who is vegan, religious, a marathon runner, a doomsday prepper, or a police officer, view your problem? You can obtain interesting perspectives by contemplating how people with different lifestyles than you would approach your problem. You can also look at experiential things such as computer literacy, marriage status, and political beliefs. The key point here is to take inventory of your demographic background, and to try to imagine how you would see things if you had a different self-image. You’re influenced by customs and expectations to a high degree that it has an effect on how you approach and deal with problems. It’s a sort of conditioning that can be hard to turn off, and limits how you’re able to see things. Although some social conditioning based upon your demographic background can be empowering, it’s a good idea to be willing to contemplate putting yourself in someone else’s shoes. Imagining how someone else would approach a problem can help you come up with more ways to solve it yourself.

Return to Problem (applying the step by step approach)

Let’s revisit the problem of trying to make the wine production process more efficient by identifying a supplier to replace. Let’s apply the five step technique I mentioned earlier to this problem.

As you can see, looking at the problem of trying to replace a supplier to make a wine production process more efficient, by contemplating how someone of a different demographic would approach it, gets you to think of a diverse variety of potential solutions. All the examples used approach the problem from different angles, and get you thinking about the problem in radically different ways. Even “mundane” things like someone's gender or sexual identity can have a significant impact on how someone can go about trying to solve a problem.

In this example, we’ve been able to come up with over a dozen different approaches by imagining what someone from a different demographic background might do. However, this may not be enough for more complicated and difficult problems.If we needed to, we could keep engaging in this exercise, contemplating how people that differed from us in even more ways would approach the problem.

For example, someone with very high computer fluency might focus on using search engines to identify suppliers that could be replaced. Someone who is a Democrat might focus on suppliers with a high amount of social responsibility. An avid marathon runner would probably look to tackle the most challenging component of the entire wine production process. Your demographic background(and the groups of people you choose to associate with) has a strong impact on how you approach solving problems. It’s a sort of conditioning that influences your behavior regarding the “proper” way to experience and interpret things. Belonging or identifying with a group of people can empower us with a variety of benefits, but can also hamper us in how we think we should deal with problems. Mundane, simple, repetitive problems don’t require much to solve, but when we come up against much more challenging ones, we need to consider changing our approach. What might be useful is to think about how you would see your problem if you had a different self-image, came from a different demographic background, or walked in someone else’s shoes for a while.

My name is Adan Noriega. I'm a business writer interested in harnessing the power of creativity and divergent thinking in order to improve our problem solving skills

This will be a blog series about harnessing the power of creativity and divergent thinking in order to maximize your problem solving skills.