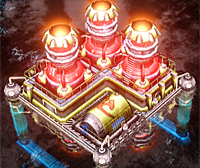 Last time, we left off at me wondering if the world of Steem was coming to an end after listening in on the Clown.

It seems rather odd that I would still go out and about on the blockchain when there was blood on the streets. Then again, what is infinite lives? As I was wandering through the narrow corridors, I noticed something was wrong. Something was not right. There was a glitch in the Matrix. This time was different. At least I had company in the stream of consciousness. Everyone wondered what had happened. Did someone slap someone so hard that the world broke? You know you live in the apocalypse when everything was falling apart from the tiniest issues.

Turned out, it was another mathematical problem. You would think the Architects had more people like @mathowl to check the designs, but hey what do I know?

In the Secret Gathering Place, it was surprising to see the Hawaiian farmer again. He seemed mellow. In fact, he lamented how he received the boot from the club he sponsored. I didn't know he had a club. I had always imagined him as the Purple-shirted eye stabber. In reality, he was not so bad once you got to know him. I did find it odd that he still sponsored the club that kicked him out.

Anyways, the Witnesses brought the world back in order. Unfortunately, most of the commercial routes are still down. I suppose the funds were still safu before the trade princes resumed their operations. I saw some people celebrating the price of their assets going up at the time. I did not understand as there were little to no trading volumes everywhere.

In the Secret Gathering Place, I keep hearing voices (did I mention that's how it is outside of the Matrix?) on about #NewSteem. The Purple Whale prophesied the world reborn under the crimson landscape. Sounds grim, but she seemed optimistic. She conjured a clone of herself to speed up the spread of her prophesies.

Elsewhere on the blockchain, the world was changing. The Banana was no longer a Witness. Big bots were doing manual labor. The Columnist was actually not working overtime for his own benefits. Nothing seemed to make sense. But, my guts told me that the status quo was no longer and I should embrace the unknown future.

Is it possible to experience an apocalyptic event without it being the Apocalypse? I do not know the answer to that question. I suppose time will tell if the series of events worked out for the better.

Pondering these points, I pulled out a recording of one of my most listened shows. I listened as I watched @lordbutterfly and @joshman start their #PokeAWhale campaign.

In other news, I heard one of the trade princes is hitting the Donkey pretty hard. I guess someone was, and still is, AFK. Wonder how long before the next chaotic event?

Will New Steem be better than Old Steem? Find out next time on Journey into the Apocalypse.