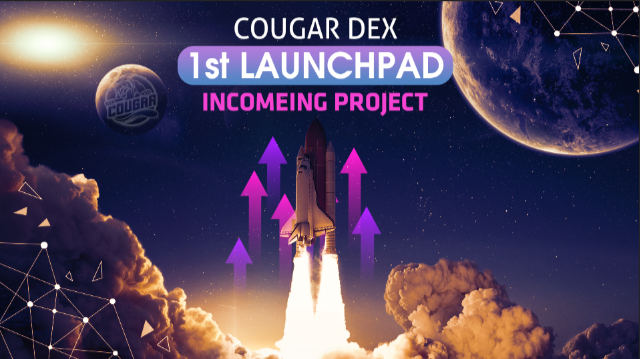 We’re honored to announce that our team has carefully planned to implement Launchpad Protocol (LPP) to emerge potential means of the ecosystem as we introduced in the previous section, and to ensure positively benefited in a new form of finance with standardization of safe and highly profitable.

Launchpad Protocol (LPP) is forming as the future trend in a lot of reputable DeFi projects once they have confirmed the credibility and strong-based support of the community. CougarSwap appointed for that, but nonetheless, with the outstanding high APR as profitability has created the meta-liquidity absolute advantages of the Ecosystem to increase the valuation as well as the benefits they bring to users as a basic principle of an established growing protocol.

The first project will be launched to achieve its liquidity target on Cougar LPP. Through the use of the funds-raising system, users will — through the use of a Launchpad protocol — commit $CRO tokens to an interconnecting principle that organizes a framework where, after that, users will receive a $CGX token based on the total committed $CRO to ensure the legitimacy of potential projects on Cougar Launchpad to grow the value of the original Cougar DEX project.

This is a form of long-term investment that we provide for users to accumulate assets on LPP which is only aimed for users who firmly believe in our ecosystem by providing high ROI, backed by $CRO as the most complete token in the most diverse ecosystems on the DeFi market. $CGX holders will benefit long-term from the token’s growing back as they participate in the initial development of the platform we chose for Launchpad Protocol. The main focus is on sustainability like the Cougar ecosystem itself.

Total $CGX initiated to the first stage of Cougar DEX, which takes equal conversion rate take into account (in 100 percent)

70% in which 30% will be used for (Liquidity) as the availability of $CGX is equivalent to incentivize the amount of liquidity users provide to the Liquidity Pool. When trading is facilitated, transaction fees are distributed proportionally among Liquidity Providers and 40% respectively used for Syrup Pools where users can earn other valuable tokens than $CGX, especially for the Stable Coin such as USDC, USDT

15% will be accounted for Launchpad process fees which will be used to buyback $CGS escalating Cougar Ecosystem.

10% will be funded for the Marketing team to implement our strategic advertisements campaign with reputable partners and on the listing platforms.
(statistical data will be implemented differently)

5% of the collected amount is used for operating liability to outline Cougar financial and functional provisions. 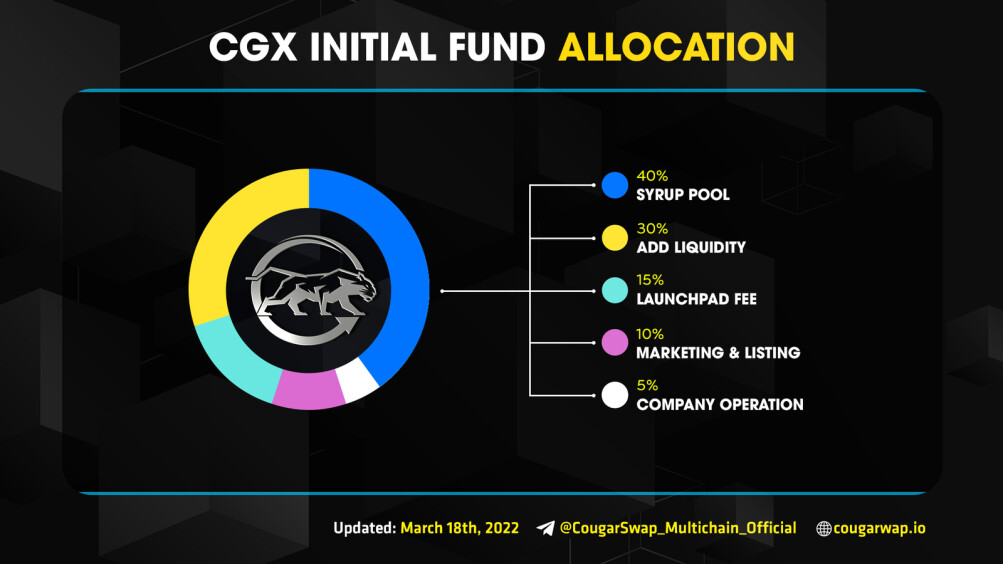 The team will use the money generated from $CGX to generate a gross profit including the use of highly productive automated matching channels on Cougar Ecosystem to maximize user’s investment portfolios.

The Launchpad Protocol raising funds — will be published thoroughly in solid $CRO tokens, as $CGX sale will take place at our website and will last for a few days, and you will ONLY need $CRO to participate in the initial CGX Token distribution (figure below)

Users can commit as much or as little as they want to the Launchpad Protocol and their final allocation will be based on the amount of funds they put in as a percentage of all funds put in by other users at the time the sale ends.

The excess funds committed will be refunded back to the users after the sale. You will be able to claim both the new tokens and unused tokens after the sale has ended.

Cougarswap Ecosystem is a long-term DeFi project that has been on the market since May 2021, with the initial BSC successfully deployed we have now held the reputation as one of the most prestigious cross-chain projects in the DeFi market.