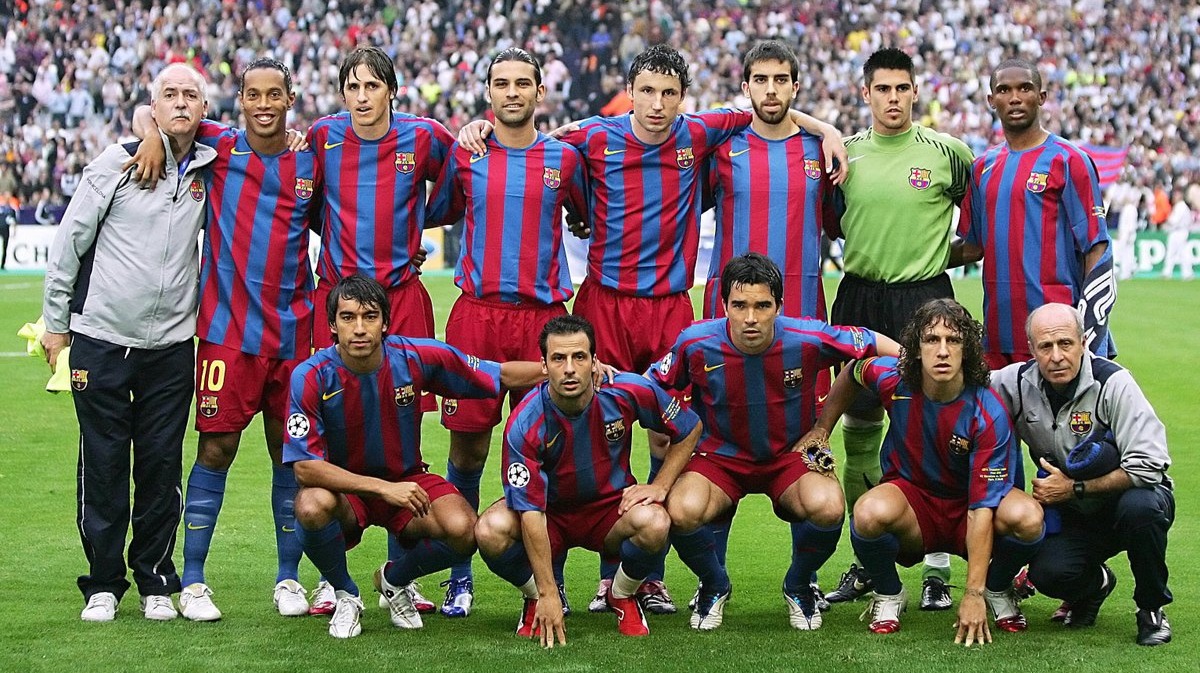 Hello everyone.. Lockdown still being our biggest problem but for our safety we are staying at our homes.. There is not much that we can do.. We should think positive and stay safe..

As we all know that we can't have any kind of sports game in last 35 days and lots of leagues already cancelled for this season.. And unfortunately we have no idea that when will games starts again..

So i had to write something not actual, i wanted to use the past again.. This will be my 6th best football teams article..

I am Real Madrid fan in La Liga and they are still on top with 33 championships.. In my childhood time Real was way better than Barca.. But in last 10 years Barcelona had 7 championships and closing the gap.. Barca have 26 La Liga championships..

I believe we all would agree that the "Messi" factor was the biggest advantage for Barcelona.. In last 15 seasons Barca was champion 10 times, all with Messi.. I wonder if Messi never played for Barca, the team would win 10 times? I think no.. But as a Real fan i accept that the Barcelona was the greatest team in last decade..

Anyways i want to talk about 2005-2006 Barcelona, which team had the Spanish championship and the champions league at the same season.. They had amazing squad, of the best that the football history ever seen.. While you are checking the players you would understand why i said that..

The Barca celebrated their championships 4 weeks before the end at that was Messi's second season.. He could only played in 17 La Liga games and scored 6 goals.. So Messi didn't helped too much to his team but still Barca gained the most important 2 cups.. Their teams was amazing without Messi as well..

Also i believe this was the best coaching days for Frank Rijkaard, after Barca he had poor performance with Galatasaray and Saudi Arabia National Football team..

Víctor Valdes: He played for Barcelona for long 14 years.. He sometimes had big negative criticism but he also played some great games too.. He was young and to be on Barca's goalkeeper would be so hard everytime.. After Zubizaretta he couldn't played better than him.. He also played 21 games for Spanish National Football team..

Ruben Martinez: He wasn't played too much behind the Valdes, he only played in several games..

Rustu Recber: He is a Turkish goal keeper who played in Besiktas which is my team after the Barca.. He was great goalkeeper and played 120 games for Turkish National Football team.. He could only played several games in Barca..

Juliano Belletti: He was the one of the best right back in his time, played for Barca for 3 years and won two championships.. After that he went to Chelsea and had great days there too.. He is also World cup winner with his national team Brazil..

Carles Puyol (Captain): I believe we don't need to tell too much about him.. He was one of the best defender ever played.. He plaeyd 15 long years for Barcelona and gained 6 La Liga, 3 champions league and Europen championships and a World Cup! What a holly career that was! He was also Spanish National Football teams captain and played for them more than 100 games.. He could play any spot at the back..

Rafael Marquez: He is another legend.. He was simple and solid player.. I believe all teams need a player like him.. He was one of my favorite defender.. Marquez played 7 seasons for Barca and got 4 championships and 2 champions league.. He was a truly Mexican legend.. He played for 147 games for Mexico National Football team..

Giovanni van Bronckhorst: He was a boss on the left side of the pitch, could both play defensive and offensive.. He also won the premier league with Arsenal. He played 15 years for Holland National Football team more than 100 games..

Sylvinho: He was a solid left back player and he was always focused on the pitch.. He has 3 La Liga and 2 champions league winning in 5 seasons.. He was a player of Brazil National Football team.. He also played for Arsenal and City..

Oleguer: The Spanish player was always starting at the bench but he was always ready to play and had some great games with Barca. He played 127 La Liga games for them..

Thiago Motta: I remember him well, he played for great clubs.. (Atl Madrid, Inter, PSG) He was playing too cool and without mistake in midfield..! He won 2 La Liga and 2 Champions League with Barca. He also played for Brazil and Italy National Football team..

Xavi Hernandez: A world Cup winner, 2 times Europen Champions, 2 times player of the year, 8 times La Liga championships, 4 times Champions Leauge winner.. And the list goeas just like that. Couldn't write all.. A legend right? I think in a big time! What a glorious career.. He had more than 200 career assists.. 194 games for Spanish National Football teams in 15 years.. A national hero!

Ludovic Giuly: He had 23 long career years, played for Barca, Lyon, Monaco, PSG and Roma. He was a very fast winger and he could hit the ball perfectly.. As a winger he had 155 career goals which was amazing.. He was also French National Football team player..

Edmilson: He was one of the best example for defensive midfielding that times.. He used to put his team together in all conditions.. I loved his defensive plays a lot.. He had lots of achievements in his career including World Cup (with Brazil) and a champions league cup..

Mark van Bommel: He played 14 years for PSV Eindhoven, Barcelona, Bayern Muhich and AC Milan.. I believe all best clubs wanted to have him in their squad because he was perfectly good player.. He was also playing some hard football! As a defensive midfielder he had 91 goals and 92 assists in his glorious career..

Gabri: He played in Barcelona midfiled for 7 years for 129 games. He was usually came to field from the bench but he was always try to be useful.. He was also played for Spanish National Football team..

Deco: When was choosen for footballer of the year in Portugal, his prime career has just started with moving Barcelona in 2004.. He won La Liga and Premier League championships and a Champions League cup.. He has created amazing attacking plays for his teammates in all his career.. After Barca he went to Mourinho's Chelsea and played also great there.. He was also played for Portugal National Football team long years..

Andres Iniesta: Another world star in this squad.. He had a nice face but he was brutal against his opponents.. He is still playing football in Japan Jupiter League in Vissel Kobe.. He still have €3.20m market value! An amazing career with lots of great achievements.. Including UEFA Best Player Award, World Cup, 2 Europen Championship, lots of Champions League and La Liga championships.. He was one of the best central midfielder in football in my opinion..

Henrik Larsson: He was amazing forward.. Too strong.. Could hit the ball too powerful with his both feet.. Before he came to Barca he had amazing career with Celtics. He was a top scorer 5 consetictuve year with Celtics.. He had won 2 La Liga and a Champions League cups, after he leave Barca he also won the Premier Leagu with Manchester United.. He is also remembered with UEFA cup goals, he scored 31 goals in 44 UEFA cup games..

Samuel Eto'o: He was my hero! One of the best forward ever! In this week i will have an article about Eto'o and you would read my opinion about him..

Lionel Messi: As i said that was his second year in Barca and he was starting at bench but he has showed some amazing skills as well.. He was also playing for Argentina National Football team that time, in August 2005 he played his first game there.. If we check today Messi scored 70 goals in 135 games for Argentina.. And if we check his La Liga stats we would all get impressed.. 438 goals and 181 assists in 474 games.. This is just amazing right?!?!

Ronaldinho: He was one of the best player i have ever watched.. A magician.. He could do almost anything with the ball.. He could fun play with the defense and gaol keepers and he had amazing assists and goals behind him.. I believe 2005 was his best career year, that's why he had FIFA Mens player and Ballon D'or both in this year.. He had 196 goals and 161 assists in his career in 529 games.. Missed to watch him a lot..

Thank you for your time, please comment for your best Barca players below..