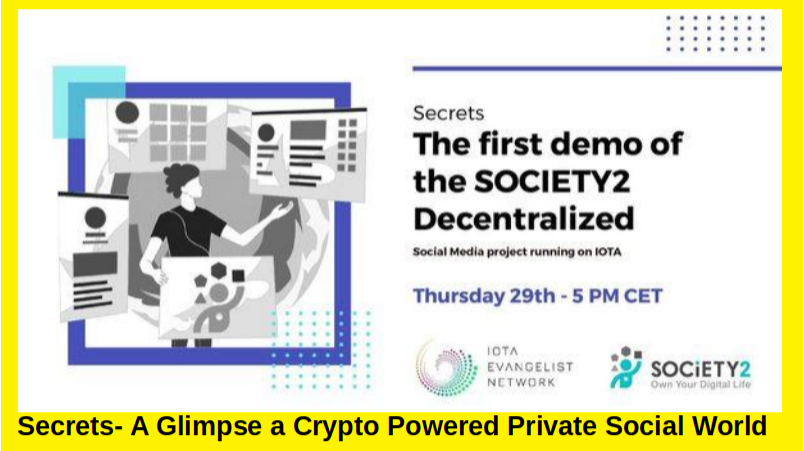 Delivered on Schedule, after a serious, 3 Month Set of Dev Sprints, Secrets is now out and ready for your use.

Use any Chromium based  browser or most popular browsers and Secrets just works... Official Press Release here

It's the tip of the Iceberg for distributed crypto powered social networking applications using MIOTA and the IOTA Tangle.

I viewed the demo on Thursday of this week  and quickly enabled my own ID via my Brave Browser (Chromium based)  in less than a minute, no problem while watching the demo.

Is the Secrets UI "User Interface" experience ok? Yes. Could it be better? Of course and they are working on that based on your feedback.

Personally, the interaction could remove a few steps to setup a group chat to be super fast,  by 'flattening' the UI a bit more.

Having said that, right now, Secrets is usable and, requires no real installation of any software, users browse to the Secrets home page (above) and fire up a group chat, its that simple.

Browser convenience now,  Mobile App coming (but more fuss than it might be worth)

Secrets essentially works by displaying a browser HTML page for you to create your ID  which in turn gets your ID a set of public and private keys which will grant access to MAMs channels for group chat communication over the IOTA Tangle, fully encrypted and away from prying eyes. Only the public key for the Secrets group chat session is shared with the other invitees,  public keys good for only the duration of the group chat.

So if you need a super secure  group chat for your own biz or personal reasons, Secrets is up to the task, right now.

Also nice is your own ability as a chat creator to decide which IOTA nodes are used to operate MAMS, you see a default list of nodes right now for the IOTA Devnet nodes (two of them) and one for Society2. When Secrets reaches MVP Minimum Viable Product status, then you can add and use only your own nodes if you like so traffic of chat data flows only where you want it to go and nowhere else.

Next up from Society2?- More "Framework" as part of an SDK  to build cool Distributed Crypto Sites and Apps for IOTA IoT and More..,

While Secrets may seem a modest step forward to most, the reality is by operating group chat over IOTA's vast network of nodes which make up the high performance (TPS Transactions per second) PoW 'Proof of Work' TANGLE, the leading distributed public permissionless ledger for the machine economy, developers are well positioned to tap into the massive growth and set of business opportunities  IoT is just now starting to  experience.

IOTA has #STREAMS and Smart Contracts coming as IOTA get's set to really take off  with the "IOTA 2.0" implementation based on #Bee  #Permanodes and #Hornet Snapshot Nodes, all of which will be accessible thru the SOCIETY2 SDK Framework aimed at building the first truly private scaleable world of Social networking. IPFS will play a big role initially in the area of distributed private storage as well.

Expect many different development camps to join in to build all sorts of new and exciting distributed, crypto powered social networking apps, networks, sites and services with the SOCIETY2 SDK , where Secrets is a first glimpse at that coming explosion of creativity on which the next gen, crypto powered,  distributed social networking Services, Sites and Apps will be built.

That's all for now,