I won’t stop repeating that jogging is a great sport. Everyone can organize his own event, dedicate to a date or a person. Such races are sometimes encountered on the world running map. As for me, this is a great way to honor a celebrity or to celebrate an event. 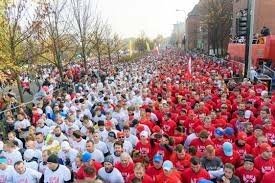 When planning my running calendar for November, I thought I would take two 10-kilometer races. But by chance, looking at the upcoming racing events in Poland, I ran into 'Bieg Niepodleglosci' - a 10km ride in Poznan. For the first time, I heard about him during a half marathon in Tarczyn. There, along with a half marathon, a run of 10 km was conducted, dedicated to the restoration of Poland’s Independence - that year they celebrated 100 years since the proclamation of independence. When I searched for information about the run, I found out that races under the general name 'Bieg Niepodleglosci' were conducted in various Polish cities, sometimes playing the role of a satellite of larger distances, and sometimes they are separate events, such as in Warsaw, Wroclaw or Poznan. 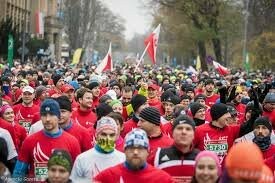 An analog of such a series of racing events in Ukraine is 'Vyshyvanka Run'. Why that Polish event interested me? Firstly, it is quite large: the number of participants reached 25 thousand, not every run can boast so many participants. Secondly, those who overcame the route got a surprise - an interesting medal.

Here everything is in normal mode: you can register at biegniepodleglosci.pl. But not everything is just as it seems. When I came to pay, I was faced with the problem: all payment systems are Polish, so if you live in Ukraine, it’s a bit problematic to use it. I managed it only with friends from Poland. Then I started looking for a hostel near the starting point. 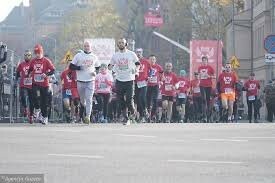 **Trip**
I decided to get to Poznan through Katowice. Having arrived in Katowice, I immediately found a bus that took me to the railway station. There I bought a ticket to the nearest train to Poznan and started my trip that took about four hours.
After arriving in Poznan, I had to solve two main tasks, before walking around the city: pick up the starting number of the run and settle in the hostel.
Issuance of numbers took place near the station in one of the pavilions of the local exhibition center: 5 minutes and I was at the place of destination. The pavilion was a huge hall, where tables for delivery were located, divided according to the starting numbers. I checked the documents and got a starter package, inside of which there was a starting number, an eco-bag, studs, a bar, and a T-shirt (the color could be chosen (red or white)). The whole procedure took about 2 minutes of my time. After completing my main mission, I walked through the center and the Stary Browar shopping center, since the hostel was only available from 14:00. The hostel was chosen to be located somewhere in between the train station and the starting point.

After waking up in the morning, I picked up clothes and went to the starting place of the race. It was in 25 minutes from my hostel. When I got to the street, I realized that I can find the way without my GPS, because I was surrounded by people in red and white T-shirts that were heading in one direction as me. When I arrived at the place of start and changed my clothes, I went to look for a luggage locker. It was interesting that there were no queues at the luggage room at all. The luggage room was also divided by the starting numbers. 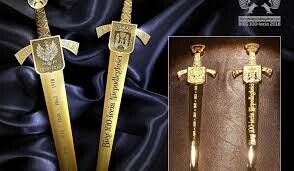 Then I went to the start. All participants were divided into sectors to start gradually, which was controlled by volunteers. So I went to look for my letter. Before the start, we had an improvised warm-up and listened to the anthem of Poland. After that, the sectors gradually started.
The route consisted of one circle, the asphalt was covering the road, and sometimes there were small descents and ascents. There were no degradation points, so it was necessary to take water with you, which I, for some reason, did not do. 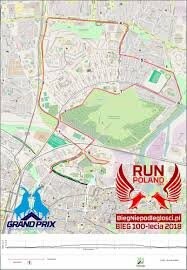 The process of running was not very good: although the route was straight, a bunch of people was running together, which was very disturbing when running. It was something like an interval run: you're accelerating, then you drop the pace as there is no way to overtake the participants in front of you. Crazy support on the road from the guests and residents of the city. At the end of the route, it was possible to meet the participants who finished and was walking through the city, supporting those who were still running.

The finish line coincided with the start. In order to receive a medal, it was necessary to go a little - a bit further there were a 'conveyor' of medals for the participants. There were queues at this stage. With the medal, I got water and a croissant and went to the chambers of luggage. I had a little rest from running, dressed up, made a few photos, and went to the station, where I had to take a bus to Kyiv. On the way, I had an opportunity to watch the Independence Day parade, which just started.