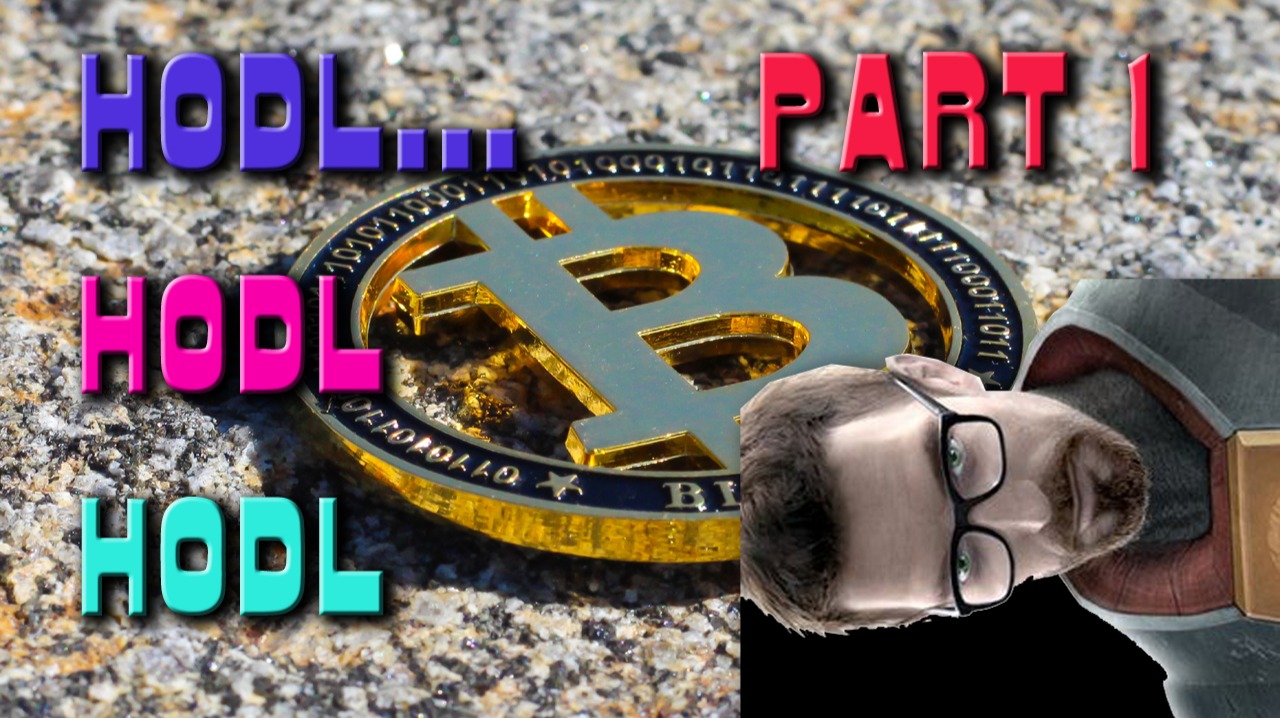 Hold On For Dear Life. It's the truest of true motto to the most earnest-hearted cryptonian.

This is often followed by "not your keys, not your coins" and "traders are traitors".

I'm here to take an heroic stab at ruining all 3 of these to one degree or another!

In this post, I want to simply glide by the surface of a few key points determining a person's crypto strategy.

Gordon must admit that on occasion, it can become very lonely having a mind and heart to accomplish great tasks, to rescue people from bad crypto moves and pie-in-the-sky coin trends and fads that... sorry... simply defy all logic, reason, good fiscal sense. Times like these can make a person wonder truly, does anyone deserve the crypto moon? I know, I know... depressing. But, we're talking about feelings, and now it's time to move forward into meaningful thoughts that perhaps lend that Gordonic reason to others.

Let's take a look at the HODL first. The true cryptomaniac can appreciate the purity of the hold... errr... the HODL. I like to distinguish the HODL from the unintentional, the HODLbags. HODL comes by determination to ignore market trends of the boring, maniacal, depressing, and euphoric. The HODLer takes small pleasures in seeing the value of their crypto portfolio rise when the real pumps or steady bulls rise, and they rest assured at their plan when things take a dive. No matter what... not even when prying from their cold dead fingers... can one force a sell upon these die-hard fanatics. Hey... it isn't name calling necessarily if it is true.. and ask a HODLer if they were insulted? Nope. It takes a tenacity beyond market emotion to be a true-blue-baby-I-love-You HODLer, thick and thin, day and night, year in, year out. A person must be a fanatic to maintain the HODL month by month, year by year.

Imagine having thousands of Bitcoins that you acquired when they were worth less than $0.01. Now, seeing that at a time when you could have cashed out for thousands when it hit $1. Finally, Bitcoin has proven its value; it is worth 1 U.S. Dollar. Hallelujah! Imagine holding out and seeing the first time it hit $10. For many, a few hundred thousand could truly have been life changing money. And yet, they held.

Imagine Bitcoin breaking $100 the first time and now you could be a basement computer mining geek suddenly worth a few million dollars. Your options have suddenly jumped from a promising Summer job at Buds-n-Suds to that Lambo you've been eyeing. Nope. I'd rather have this invisible magical internet money, puleeze. Wow, right? I mean, wow.

Imagine when it broke $1000 and that millionaire could be worth literally tens of millions of dollars for literally having done nothing but loading an .exe to their crap vid card risking virus and wasted time on a hobby maybe a few thousand people actually cared about.

It is hard to remember that the world first really was taking the implications of Bitcoin's growth seriously when it was around $4 or something insane of that nature. There were drawbacks from $200 to under $80 in the early days that had to have many people sweating over their 401K's they cashed out. Imagine the days of people buying $4000 rigs that never arrived from Chiynah until after they could no longer be used to mine, and sticking with it, and still, yeah still... HODLing without selling a single Bitcoin.

Sure, you may have started your journey at a $5000 Bitcoin or even a $20,000 Bitcoin. Whatever. And even more, you could be HODLing DASH or ETHER, Litecoin or EOS. You could be one of 'those' people jumping from a Pancake to a UNI to a DOGE to the next hip hop dippety dew, but you're HODLing like nobody's bidness and you're serious about it. Whether I think that is... permissible or not is irrelevant. Gordon is here to fight for the rights of ALL HODLers, not only the ones he necessarily agrees with.

So, here's the thing. If you are a HODLer, and you are in a position to hold AND buy the dip, then you already know the value of watching the market. You watch it because you want to. You watch because you care. You watch because you're curious. My advice; don't watch it out of an obsession or unhealthy addiction. If it isn't going to change your mind on a buy or a sell, then watch for the purpose or entertainment; don't watch to avoid work or loved ones. Don't watch out of panic for buying Safemoon or Shiba you crazy nuts! Okay, again, I support all in their quest to loyalty-coin-programs even if I cannot possibly understand them.

Stick To The Plan

The HODLer should probably consider always finding a way to add to their hand. If you work somewhere with a 401K, you are told by wise counsel on multiple occasions to contribute aggressively and consistently. Locking away funds that are beyond your reach for a future goal, like an education for the kids or a yacht post-divorce- lol... you know the drill. Oh yeah, that thing that people used to do... a retirement plan. I guess those still exist as well. Anywho... the first thing I want to highly recommend, and the next post that is incoming will focus solely on this topic: HAVE A PLAN, MAKE A PLAN, SHARPEN, TEST, UPDATE and PERFECT THAT PLAN.

It's okay if you don't know exactly what you want to do. It's even okay if you have to alter and edit along the way. But, what I beg of you, is not to just hop around buying ridiculous coins because it is the sudden thing to thrust one's self into. Trust me; some day, somewhere, on some planet, SOMEONE is going to moan into the bottom of a beer mug the laments of spending FAR too much on a crypto kitty that led to losing their house. This stuff is real, yo, and I have a hard time fathoming the brief lapse of judgment many people afflict themselves with. And yet, we are all investing, some heavily, in the spirit, the experiment, the promise of a field that is exciting and daunting.

Crypto covers technology, economy, global governance, the future of civilization, and we are living in the time where they still aren't quite sure if 'they' even want to allow it to exist. We are all taking risks. This should weigh incredibly heavy on the shoulders of the HODLer. Most will say "I didn't even sweat it" when those huge corrections happened. But, you hafta know there was some silent worry taking place on those bigger bags.

What I am saying to the die hard HODLer is to have a plan and stick to it. Editing the plan is fine. Refining the plan is fine. Changing the plan while learning from the right life lessons is also fine. Resist letting the hiccups of life cause you to dip into the HODL or profits if that isn't the plan you have earned the discipline to stick to.

It is human nature to leave certain elements of the plan unlabeled, flexible and undetermined. "We'll see when we get there" is a common phrase. Others are similar to a kid leaping to the TV for Saturday morning cartoons... oh wait... analogy now dead... scrolling through one's social media looking for new meme's? I dunno forget the analogy all together. Others are prone to the excitement of the next pump, the next fad, the next launch, staking, locking, lending, and before you know it there are too many bags to remain organized. You might be up, down, diversified to the point of utter portfolio confusion. That isn't a plan; that's just reckless abandon of logic, chasing after an interest that happens to have some habitual elements attached.

So, true HODLers I applaud your efforts. My goal is to bring you proper respect, and then to continue the topic with a suggestion that there are a few additional ways you can show your support for your favorite coin(s). Read part two comin' atcha right away!

And for now, Crypto Gordon Freeman, the free man, out.