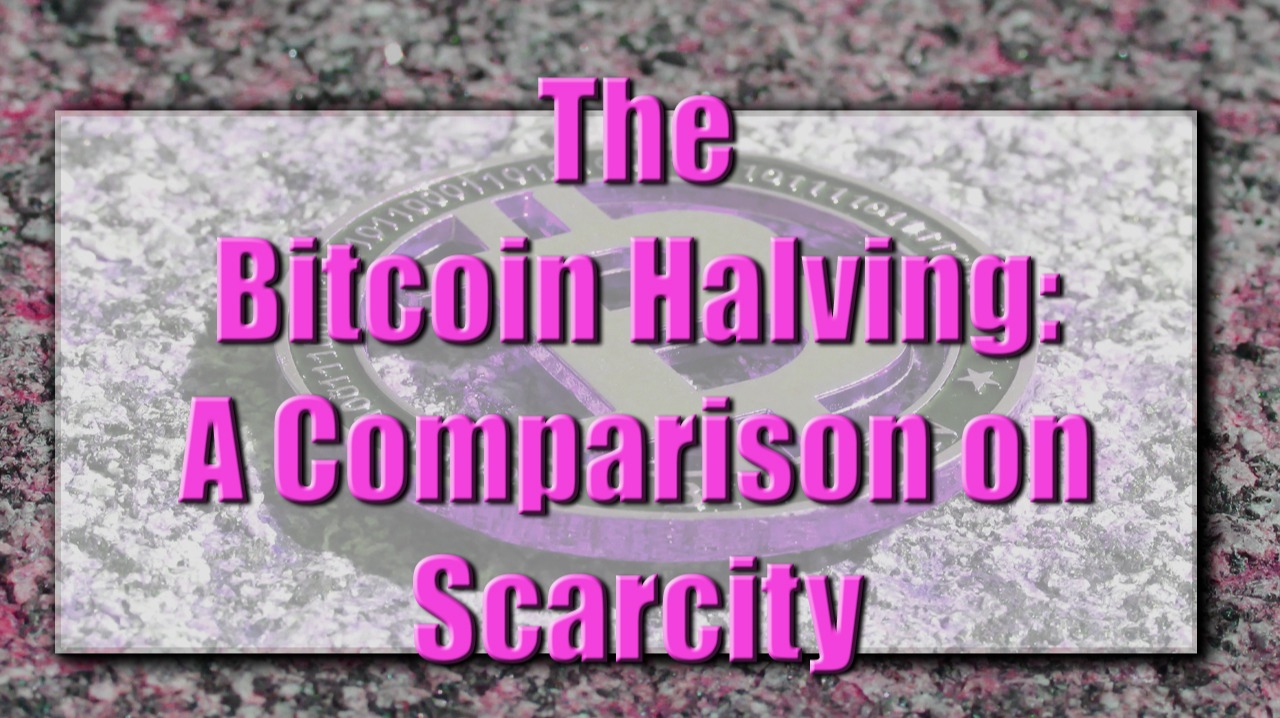 A Real-World Example on the Value of Scarcity

Bitcoin. Ah Bitcoin. So many know you. So many love and despise you. You are the biggest, the first, and your father is a myth and a legend... perhaps a true genius.

It just so happens that my choice to write this post coincides with the actual day of the halving last year: May 11, 2020!

Some things are just meant to be.

There are plenty of others that have an economic model built at the heart of their design. There are even examples of numerous digital currencies that attempted to break through the cryptological challenges Bitcoin seems to have resolved. But, Bitcoin did seemingly the right thing at the right time, under the right conditions, and in a manner that the right crowd could test, participate in and embrace.

One of the key selling points for Bitcoin that continues to thrust it to the top, is the concept of a built-in scarcity model. If this model were unilateral, if it were over-simplified, there would be numerous ways to game it despite its logic. But, scarcity is built into Bitcoin's supply, its math, its security, and its network.

Not only do I believe in the excellence of Bitcoin's financial model, I'm staggered that it has maintained its stability to the extent that it has, and 2020 was the year that we got to test the seemingly ultimate "what if" of its financial acceptance as a sound value-storing financial instrument.

21 million Bitcoins are the max supply ever to be available. That would be the simple version of Bitcoin economics. You mine 'em, you assist the network to transact them, and you get paid a reward in them. Plain, simple. But, also incredibly complex. You see, part of the built-in value of Bitcoin's incentive is the very fact that the entire network ecosystem is rewarded by its own byproduct. If you don't believe in Bitcoin at all, and there was nowhere on the planet for anyone to trade out of Bitcoin, nobody would mine them other than the computer geeks who loved the idea as a concept and the cryptographers who embraced the math and science. Much like a credit system on a site like Reddit, you can't 'spend' these points anywhere off platform. Then, Bitcoin exchanges become a thing, and regardless of whether you believe or not, they have value. Liquidity is the economic mechanism for any asset to maintain, or gain value. That's it and nothing else.

So, at its core, 21 million max supply is all that a project needs for scarcity. But, you can do something incredibly more important to make the model more concrete, and that is to increase the difficulty in generating new coins in a scaled process over time. This process monitors the network, the traffic, number of transactions, and when things reach the proper resistance point, Bitcoin either sets things to continue as is, or to increase difficulty. This difficulty is then also tied to a smaller payout at the "halving" events we gleefully like to call the halvening. As it gets harder to generate new coins, computationally more taxing on the network of computers, you also earn 1/2 as many Bitcoins as a reward. Thus far, we have seen that if you take the value of a Bitcoin at the start of a cycle, the price at the end of a halvening, and divide them for the median price, you will find that the value of Bitcoin goes up at a much higher value, at a much faster rate, than the difficulty slowing down its progress. It profits an excellent means of adjusting to markets while increasing in value.

So, when some people like myself factor in their concerns about the absolute fundamental reasons underlying an assets value, I consider scarcity as an important feature. Novelties like Doge, made in jest to intentionally defy economics, spitting out far too many new coins steadily, prove that the active market dictates the value of the pump as long as there is plenty of interest, the ability to produce coins, and the price is low enough to make it an easy entry point for a LOT of users. Doge will never ever ever be able to generate enough liquidity or money on planet earth, to actually limit its supply. It is mathematically impossible, So, we will never see a scarcity of Doge. In contrast, Litecoin is modeled after a leaner, smarter Bitcoin with its own limited supply, and at some time we should be able to see the long term effects of an actual limited supply of both. Until then, the motivating force beneath these assets is the BELIEF in their scarcity model as we slowly edge closer and closer to the actual reality of this limitation.

And now, for a real world comparison. Living on the east coast of the U.S., I was suddenly made aware of a successful cyber attack on our main supply of petrol to the east coast. I was shocked to find that within a few hours of the announcement going public, that I was still able to hop in my car, run down the road to the first reliable-quality gas station and put $20 in the tank.

Now, I already had enough gas for the next 2 trips I had planned to make over the next week or two, and that $20 I had plans for, but at the news that there might potentially be a flat-out short-term end of supply of gasoline, I didn't even think twice to run out and fill up... just in case.

I did not experience a shortage of gas (yet). I was apparently ahead of the panic in my area. But, as of yesterday, the news spread far and wide and everywhere was reporting outages all across the east coast. When panic sets in, vendors unfortunately are willing and able to raise the price almost at will, until local governments lock in a moratorium on price gouging.

We value things that we tend to take for granted. The most challenging situations often happen when something we take for granted is suddenly gone. If the electricity goes out, we are thrust into the 'dark' aged (pun intended), going from these cutting edge modern people with our wifi and our internet, to lighting up the candles and creeping around corners with flashlights. Okay, yeah a lot of people also have generators, but a strong percentage of those only last a limited time.

But yeah, the scarcity model is a real thing. Hopefully we will never have to see an artificial shortage of Bitcoin supply on a massive scale, limited by vendors or governments, but it could happen... easily it could happen.

I will be writing a few other articles of similar context covering the topic, because there are parallel valuations to the market that can affect the true underlying value of a scarce product. The full economic impact from these will absolutely never be known for certain. Unless we were able to do two test models, we will only ever know the reality as it plants itself in the global market.

For now, and hopefully in the next 3 years, we will see the likely economic model of Bitcoin and others play out. We won't know until we get there, just how close we are to pressing against the true limit in supply, but if a gas shortage panic tells us anything, the immediacy will be real at market, and the price will reflect people's eagerness to squeeze out the last drops.

And on that note, a satisfied crypto super hero with gas in his tank and Bitcoin in his account... for now... out.