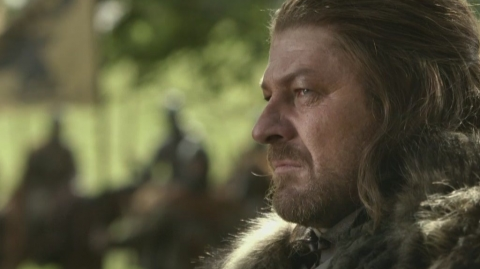 I watched the third series of the Eighth (final) season of the cult series “Game of Thrones”. So far, a final impression has not formed, a savoring aftertaste. I definitely liked the first two episodes of the final season. Probably the joy of a long-awaited meeting with your favorite characters affects?

From correspondence on the forums it is known that almost all fans regret the “mochilov” back in the first season of Ned Stark. Say, and his actor played beautifully, and the character himself is purely positive and brutal, and therefore his producers and scriptwriters were killed in vain prematurely. It may well be that they are somewhat right, but from my bell tower this is a wrong opinion.
Ned Stark was direct and solid, like a blade of a knight's sword, and therefore was initially doomed to his unenviable fate in the intrigues of King's Landing. Until the executioner's ax cut off his head, Stark survived only in connection with his stay on the outskirts of Oikumeny. He ruled for himself in the North, which he no longer needed, didn’t climb anywhere, he didn’t come across any of the powers that be. And only for this reason he lived for forty years, and had children, and held his castle with a firm hand. As soon as the king called for his faithful friend Ned Stark to serve, and even to the highest position among the officials of the Royal Harbor ... It seems that from that time Ned was doomed. Stark would have a chance to survive and even live to a very old age while being in the post of commander in chief of the army (or are the armed forces called there?), But not holding the position of the Hand of the King. Only a person devoid of principles, absolutely immoral, standing "on the other side of Good and Evil" is suitable for such a position.

Ned was distinguished by courage and nobility, but was completely deprived of perspicacity, observation, the ability to draw the right conclusions from events. For example, he personally chopped off the head of a deserter from the Night Watch, captured in his possessions. But that soldier directly and unequivocally spoke about the appearance of the White Walkers, whom he saw with his own eyes. But Ned let this crucial information pass by and executed the deserter in order to set an example of something (debt seems) to his sons. Then, after a short period of time, fate again directly pointed out to Stark an ominous change, revealing Lyutovolka and his puppies. But here, Ned Stark ignored the sudden appearance of this rare beast in his lands. For a resident of the Borderland, these are two fatal mistakes.
It is not surprising that Ned did not find the courage in himself to refuse the sudden request of an old friend, his king, and took a completely inappropriate state post. In connection with all this, I do not think that Ned Stark would have done something good for the state and the people, had he lived longer.