Looking Back At Axie Infinity Part 2: The Awakening 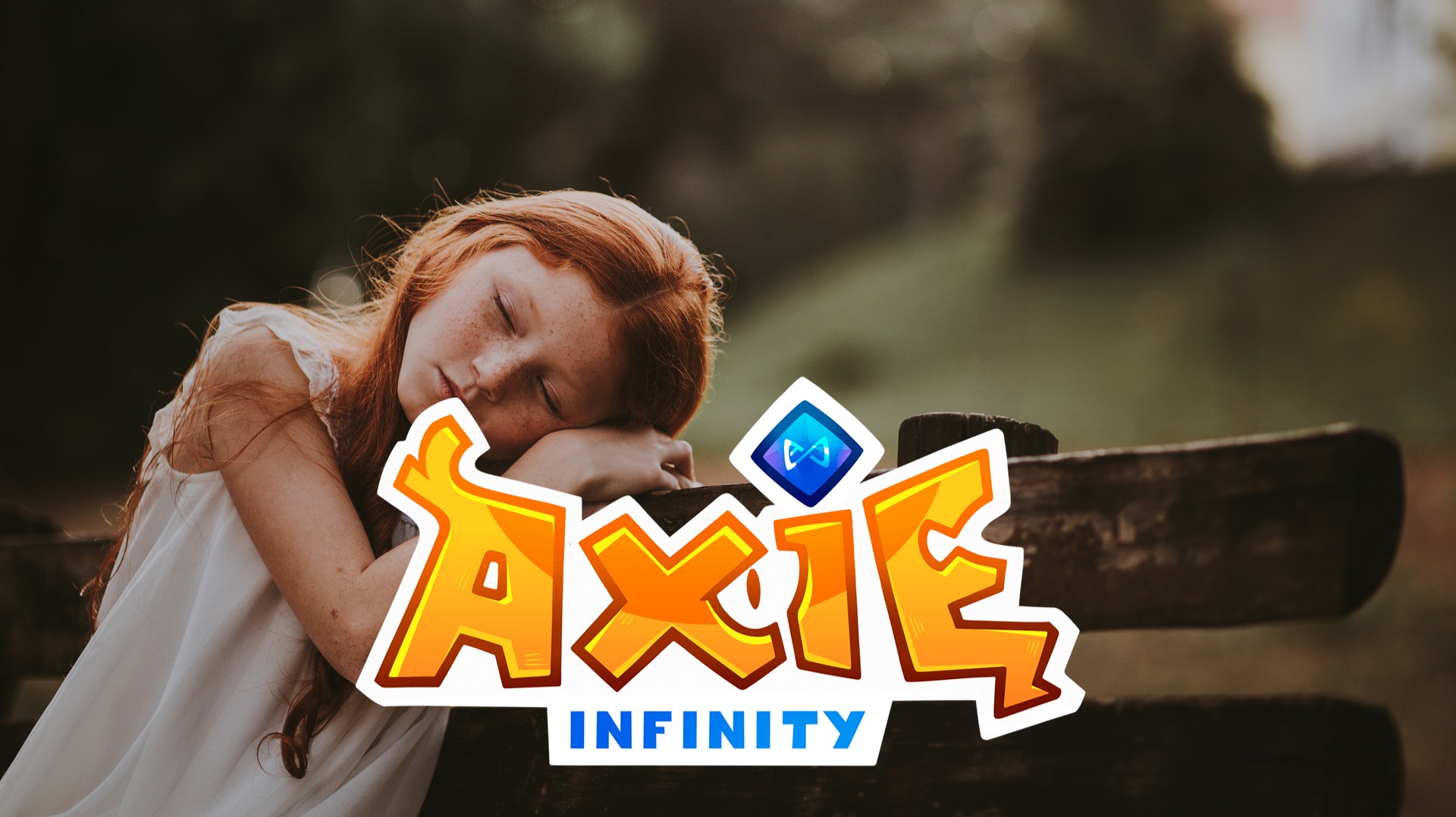 Looking Back At Axie Infinity Part 2: The Awakening

Axie Infinity is arguably one of the best games out there and statistically speaking is the best NFT game within the market, proving to be one of the most profitable games. Over recent weeks Axie Infinity has met unprecedented hype, its user activity skyrocketing to have a flow-on effect to its native tokens AXS and Smooth Love Potion (SLP), smashing their previously set ATH (All-Time High). Axie Infinity has grown to a great game but a great lingering question is how did it start? How did Axie Infinity first come about? How did it grow and become more and more popular over time? How did its developers make such great moves leading to this great hype? The answer is a long one, so a series will begin regarding Axie Infinity's history: 'Looking Back At Axie Infinity.' Leaving out from the first major release of Axie Infinity, Axie Infinity begins its great path of development, consistently improving the game, again and again, to meet its players' needs while spreading its wings out to the outside world.

The End Of Axie Infinity Beta

By the start of May 2018, Axie Infinity had made great development in its game, releasing a wide variety of features over the preceding months. This includes a marketplace and breeding mechanism, both essential parts of Axie Infinity that continue to exist within the ecosystem today. At the end of the Beta of Axie Infinity, Axie Infinity make the following mentions of its ecosystem:

Axie pair breeding functions the same as the current breeding system. Two Axies are chosen for bringing, a price is paid, and the child Axie is born. However, the price of breeding is mouth-watering when compared to the current price, the example going for 0.002915 ETH, which at the time was 2.19 USD. Now with Ethereum (ETH) around 2500 USD, goes for about 7.29 USD - a massive price difference. 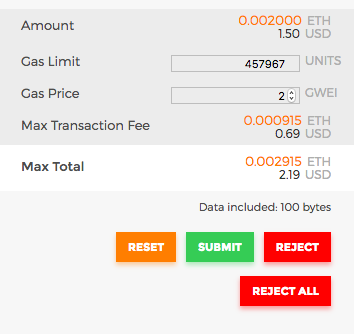 The Mating Club breeding feature is exciting, though appears to no longer exist within the current Axie Infinity breeding system. Within the Mating Club, one Axie from one player can be bred with another Axie from a different player, the player making the payment earning the Axie. Similar to the Axie Marketplace, Axies are listed for breeding by players for a certain fee in breeding with such Axies, those wishing to breed with the desired Axie paying the fee. When the Axies breed in the Mating Club, the player who paid the fee gets the child Axie while the breed offeror receives the paid fee.

For the breeding costs, they were only payable as their current in-game token EXP, going as follows:

Note that with AXS not established at the time, EXP was the only price for breeding, making it much cheaper. However, there was the drawback of ETH fees, Axie Infinity running entirely on the ETH blockchain for ETH fees to apply to every Axie Infinity transaction.

Towards the end of May 2018, Axie Infinity decides to go on an Axie Auction Spree, selling a variety of Axies towards their market.

Three unique Axies were first auctioned called Agamogenesis Axies, having the following names: Durendal, Hauteclere and Almace. These were experimental Axies, the Axie Infinity team having fun with Axie body parts, giving them away to the Axie Infinity ecosystem. These Axies are perhaps the rarest in the game, hitting enormous prices. For example, Durendal went for 60 ETH last year, as shown below. 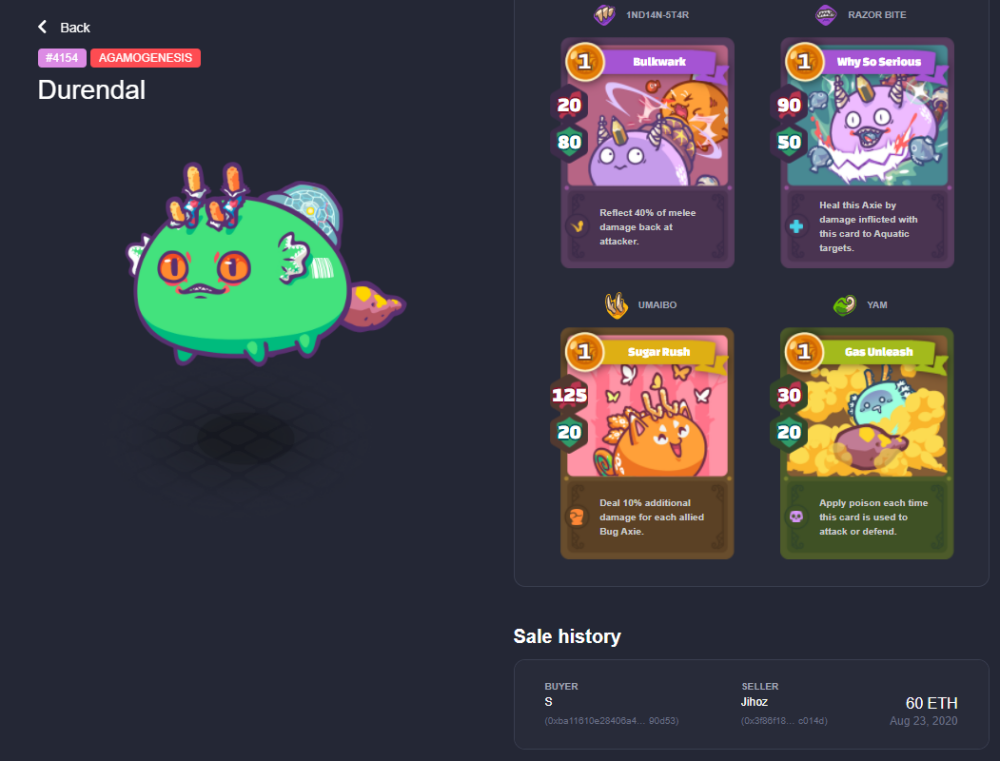 After the Agamogenesis Axies were auctioned, Axie Infinity established an Egg Shop. As the name suggests, this is where Axie eggs can be bought for unique Axies. For such sale eggs will begin at 0.412 ETH, moving 0.1% downwards per minute. The auction has 12 eggs sold at a time with new eggs beginning at 150% of the selling price of the last egg from the previous sale and regenerate automatically when sold. 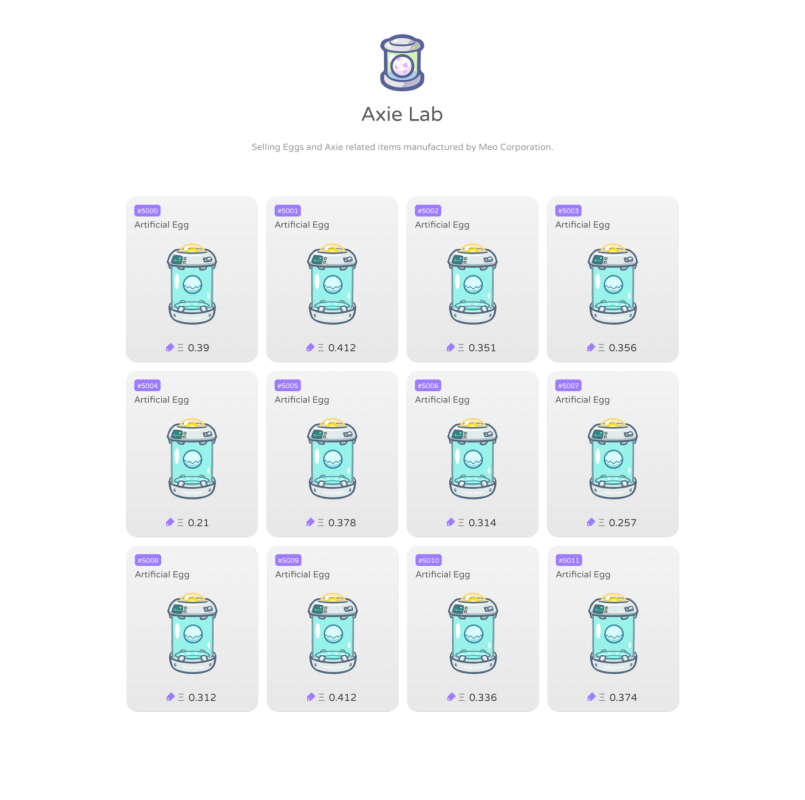