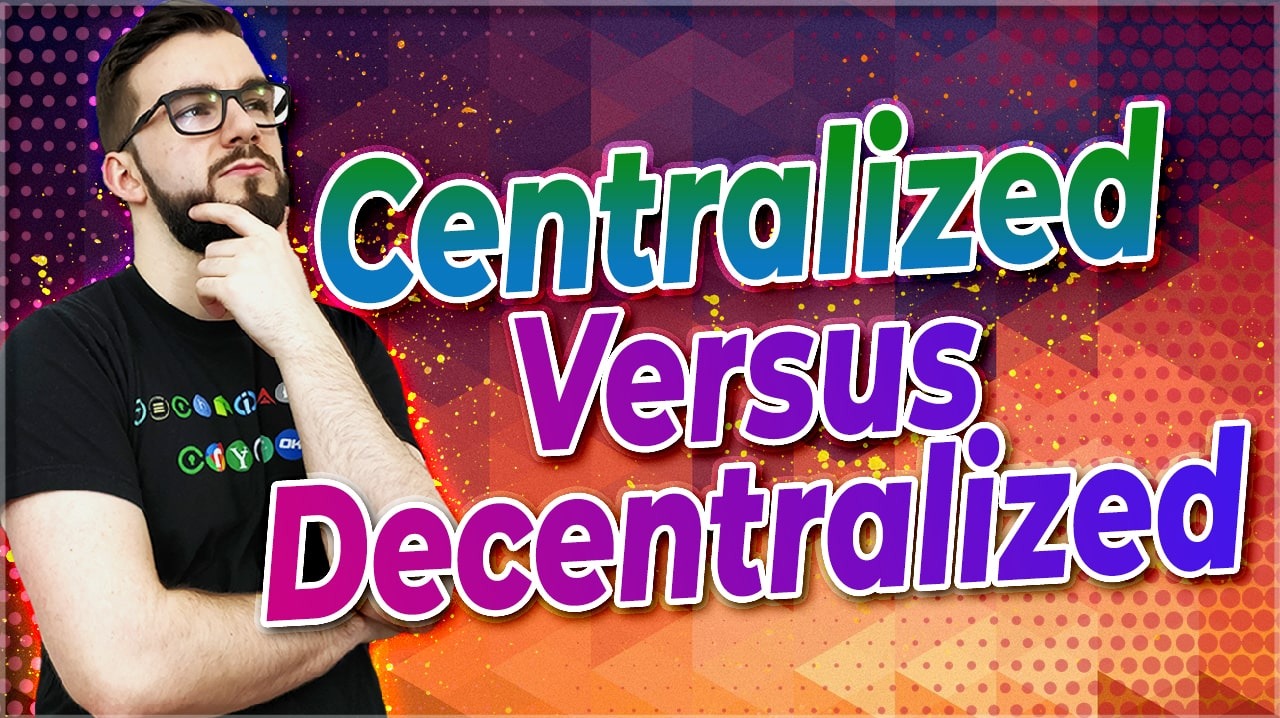 Centralization is defined as “the process by which the activities of an organization, particularly those regarding planning and decision-making, framing strategy and policies become concentrated.” More broadly though, it doesn’t need to pertain to an organization as it could refer to a network like a blockchain or the internet.

Decentralization is defined as being the opposite “the process by which the activities of an organization, particularly those regarding planning and decision making, are distributed or delegated away from a central, authoritative location or group.”

Now, these can apply to many things: politics, technology, organizations, etc. When we are discussing these topics, we are typically talking about control, access, and ownership. You can decentralize anything from finance to governance structures. An example of this is Bitcoin. Bitcoin takes the concept of traditional centralized banking where they have control of your funds and could take them away and takes away their power. With Bitcoin, you have the control, access, and cannot be taken away from you. It’s decentralizing money and wealth so that you can have access to the financial system without relying on a central authority like a bank. As we know there have been many instances of banks closing accounts based on ideology or politics. Paypal has closed many accounts, one of the more controversial runs of bans was against sex workers.

My focus is typically on social media. Centralized legacy systems like Twitter, Facebook, and YouTube are centralized in terms of their content and moderation decisions. They have censored countless accounts and are very biased because they have all the control centralized to a small subset of people. When you do this, you cannot avoid bias because people have innate and built-in biases they may not even know as well as ones they are fully aware of. Decentralized platforms like LBRY or Hive achieve this via blockchain technology and encoding it into the blockchain. Decentralized platforms don’t have to use the blockchain like Mastodon which is a federated system, but most decentralized platforms hold the same values of privacy, transparency, monetization, and free speech which have all been forgotten in legacy centralized social platforms today.

We saw with the Twitter “hack” that in a centralized system, there are single points of failure where access to one account, gives you access to every account. This isn’t secure, safe, reliable, or sustainable. This cannot happen in a truly decentralized system, but you also lose out on some benefits and features like password recovery. You take on the responsibility and the burden with decentralization, but you also reap all of the rewards and experience true online freedom. I believe it’s a small price to pay.

Many people are unaware of these solutions because the problems aren’t very obvious to them and thus they don’t see a need for a solution. The issue with that is you won’t get censored or banned until you get censored or banned and then your voice on those platforms is gone and you cannot bring about the change you could have with this awareness.

This is meant to explain and to serve as a call to action to use and support decentralized systems. But please share your thoughts on centralization and decentralization. Do you feel safe using platforms like Twitter? Is the trade of convenience and speed worth securing your privacy and online freedom? Let me know in the comments below and don’t forget to like, share, and subscribe as well!