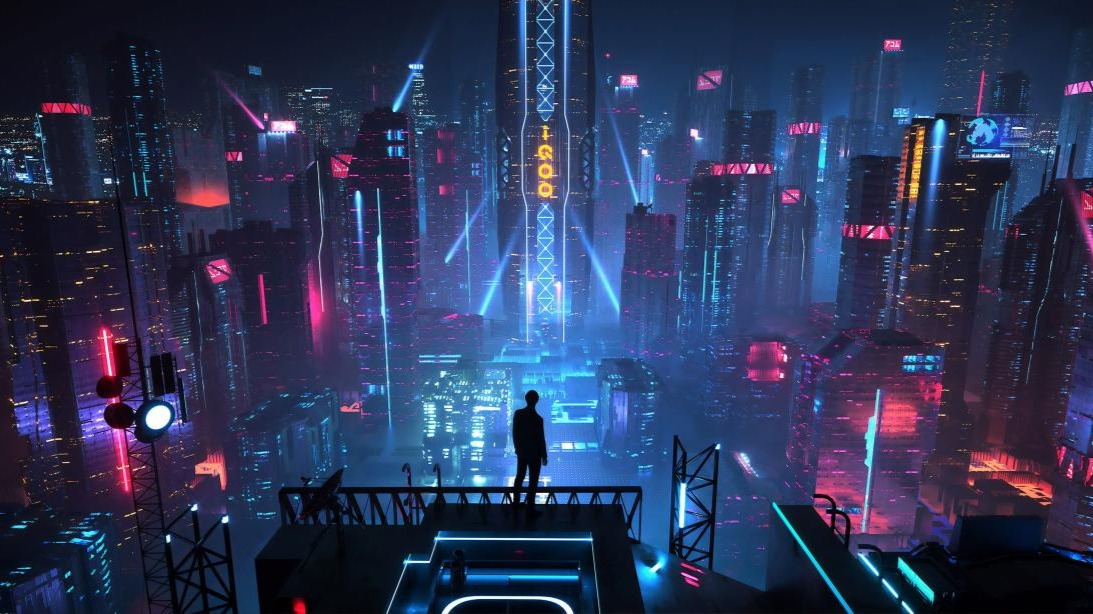 I know we’re in trying times right now with a global pandemic, mass protests, and riots ravaging America, but let me tell you, things aren’t all that bad…

A new era in crypto may soon be upon us!

We’ve been in a distinct downtrend for nearly 900 days (~2.5 years) and it finally looks like the tide is changing.

Bitcoin and cryptos across the board have performed extremely well as of late and it's looking more and more likely that the macro downtrend is coming to an end.

You know what that means right?

It means that not only Bitcoin, but a variety of altcoins are primed to perform extremely well, and I’m here to share with you some of my top undervalued picks!

Now, it’s been a while since I last posted on Publish0x and I gotta say, I’m surprised at how big it grew!

The last article I posted was on July 9, 2019, and since then, I know p0x has grown quite substantially so I expect more tips on this piece ;)

All jokes aside, the following article has a similar angle to my last post from last year, titled '3 Promising Crypto Project From Top 200 That Can Soon Enter Top 100 on Coinmarketcap' . One of these coins was Matic, which turned out to be a huge success and managed to enter top100 and I’m very happy to see my portfolio increase because of it.

Now, in this piece, I’ll fill you in again on 4 undervalued crypto gems that have huge upside to enter the main stage.

Hope you enjoy it :)

My first undervalued crypto pick is Bancor (BNT) – an on-chain liquidity protocol that enables the automated, non-custodial, decentralized exchange of digital assets on Ethereum and other blockchains.

The protocol has a native crypto token called Bancor Network Token (BNT), which serves as an intermediary token used by Bancor to initiate instant token exchanges.

BNT holders can participate in Bancor’s network by staking their tokens in automated market makers in exchange for trading fees, staking BNT to secure the network and earn rewards, and stake it to earn voting rights in the Bancor DAO.

In other words, Bancor’s BNT token has a lot of utility and it's easy to see where it derives its value, which is an aspect I like a lot about this project.

Also, another thing I like about Bancor and why I think its an undervalued crypto gem, is the fact that its protocol is providing Ethereum DeFi with tremendous amounts of liquidity for the decentralized exchange of assets.

According to data from DeFi Pulse, Bancor ranks #10 in terms of locked USD value in Ethereum DeFi and as of June 3, 2020, a total of $16.2M USD value is locked in Bancor for the pooling of liquidity for non-custodial decentralized exchanges (DEXes).

This amount of value locked in Bancor has been steadily increasing over the past 90 days as its DEX protocol continues to gain traction among Ethereum DeFi users. 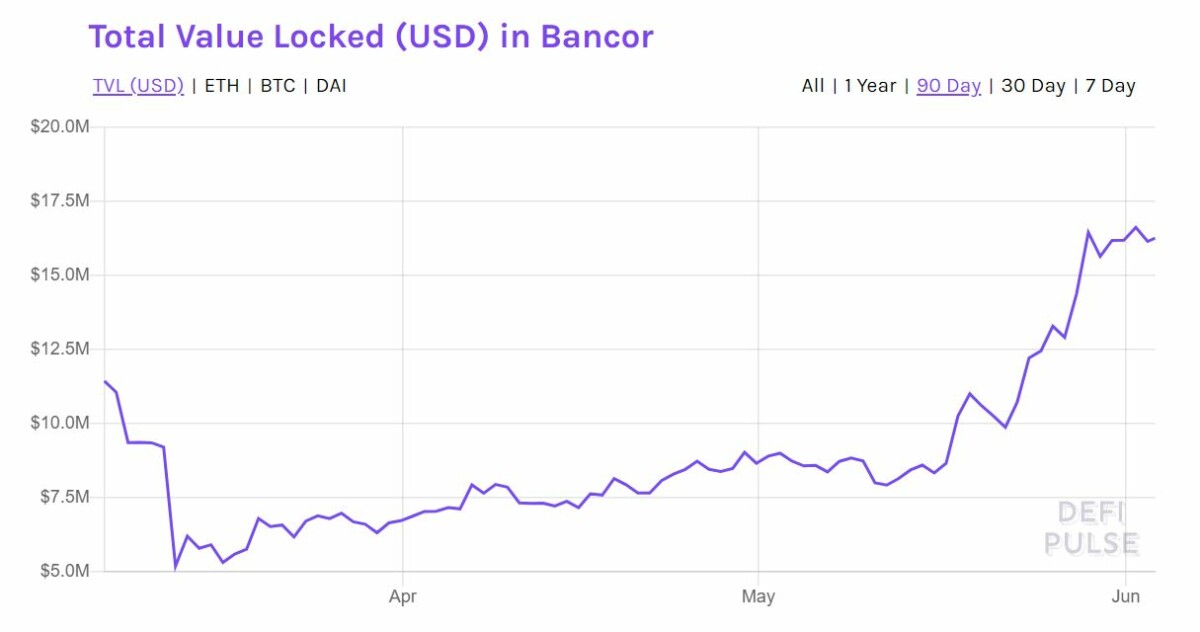 If this trend continues, I can see Bancor easily breaking into the top 100 cryptos on CMC.

Another thing getting me excited about Bancor is the upcoming release of its V2 upgrade in Q2 2020.

Bancor V2 is an extremely important upgrade that addresses some of the major usability issues plaguing Bancor since 2018.

For instance, in the tweet below, see how Bancor V2 solves problems with today's automated market makers (AMMs):

All in all, Bancor is about to get a whole lot better and I’m willing to bet its BNT token price will reflect its improvements.

The real deal about Bancor lays within its 'impermanent loss' solutions on which most of DeFi heads are scratching their heads about. If you wanna know why is it such a big deal, head over to this article.

If you lookup Bancor's chart on CMC, you can clearly see the price spike amid the announcement on V2's features. I bet it's just the beginning and the real boom on bancor is yet to come once the masses realize its importance for DeFi.

My second pick, Power Ledger (POWR), is the only one I’m carrying over from last year when I wrote a piece like this.

For those of you who are new here, or don’t know what Power Ledger is, here’s the TL;DR:

Power Ledger is an Australian-based cryptocurrency project that plans to revolutionize the entire energy industry by enabling local areas to sell and distribute solar power to their neighbors.

It’s doing this by building the Power Ledger operating system for the new energy marketplace, which allows for peer-to-peer energy trading from rooftop solar panels.

Using Power Ledger’s blockchain technology, anyone can collect and store solar power to then go and sell it to people in your neighborhood for profit. Also, Power Ledger’s technology can be applied to other renewable energies and environmental commodities as well.

The reason why I’m still so excited about Power Ledger and its potential to perform extremely well in the future is because of its depth of partnerships and accomplishments.

For instance, the project's accomplishments go back to 2018, when Power Ledger was named number 1 at Richard Branson’s ‘Extreme Tech Challenge’ on Necker Island.

And more recently on May 24, 2020, Power Ledger signed an exclusive partnership with TDED to accelerate blockchain-based digital energy business in Thailand.

This partnership is a pretty big deal as it will see that Power Ledger’s blockchain technology is:

Additionally, Power Ledger is involved with many more energy projects across the world, including:

All in all, with all that Power Ledger has already accomplished, I believe that it's only a matter of time before investors take notice and send the price of POWR to the moon.

Another crypto I believe to be severely undervalued is iExec (RLC) – a decentralized cloud computing network that gives distributed applications (dapps) access to trusted off-chain computation and data.

But the feature of iExec that I find to be uniquely interesting, is that the project has created the first-ever decentralized marketplace for cloud resources.

Via this marketplace, anyone can monetize their applications, servers, or data sets by trading them on a global market, just like any other commodity. And powering commerce on this decentralized marketplace is iExec’s RLC token, which is also used to secure the network through staking.

That said, iExec is an innovative blockchain project that utilizes its native RLC cryptocurrency in powerful ways.

Also, the project has some serious partnerships including:

You must know by now that I get very bullish when a project has positive developments, and boy does iExec have some good ones.

iExec can be broken down into 5 important development milestones, iExec V1 to iExec V5.

iExec V4, released in December 2019, was a major milestone for the project as it included key improvements for the scaling and adoption of iExec.

It solved the scalability problem of blockchain applications, introduced transactions with zero fees, allowed for an easier user/dev experience, and allowed more companies to customize a cloud computing infrastructure that is specific to their business goals.

V4 took iExec to the next level and put the project on a lot of people’s radar.

I expect V5 will do the same.

iExec V5
iExec V5 is slated for December 2020 and will extend the usage of iExec beyond the Decentralized Cloud. It will open up a whole new world of applications specifically deployed to take advantage of IoT, Fog/Edge Computing, and Smart City technologies.

The V5 release will also include many other implementations such as decentralized governance and energy-positive workers, which are two highly anticipated features.

All in all, iExec has thus far proven itself to be a leader in the decentralized cloud computing space with the release of V4 and I expect even bigger things to come as V5 is released later this year.

That said, iExec is most definitely an undervalued crypto gem that ranks out of the top 100.

My final pick for this undervalued crypto’s piece is WazirX (WRX) – which is an India-based cryptocurrency exchange that enables you to Buy, Sell & Trade digital assets like Bitcoin, Ethereum, Litecoin, Ripple and more in India.

WRX is the native utility token of the WazirX trading platform and it forms the backbone of the WazirX ecosystem. The token can be used to pay for trading fees to receive a 50% discount and will present token holders with a variety of incentives and benefits through time.

That said, WRX can be compared to other exchange utility tokens such as Binance’s BNB, KuCoin’s KCS, Huobi’s HT, and others.

However, the reason WRX is more appealing than these other exchange tokens is the fact that it’s extremely new and low in market cap.

Therefore, WRX has loads of potential, and in my opinion, it’s extremely undervalued.

Besides the points mentioned above, there are three more reasons why I am bullish on WRX and why I think it's undervalued:

Okay, did you take that all in?

Now, do not underestimate the importance of these points because they are extremely bullish for WazirX and its WRX crypto.

Crypto trading is once again legal in India and two of the world’s leading cryptocurrency exchanges, Binance and Coinbase, want a piece of the Indian crypto market.

Therefore, these two exchanges, Coinbase vs Binance, will be going head to head on a sovereign land, with Binance’s player being WazirX.

Cheers guys! I hope you enjoyed these 4 undervalued crypto gems.