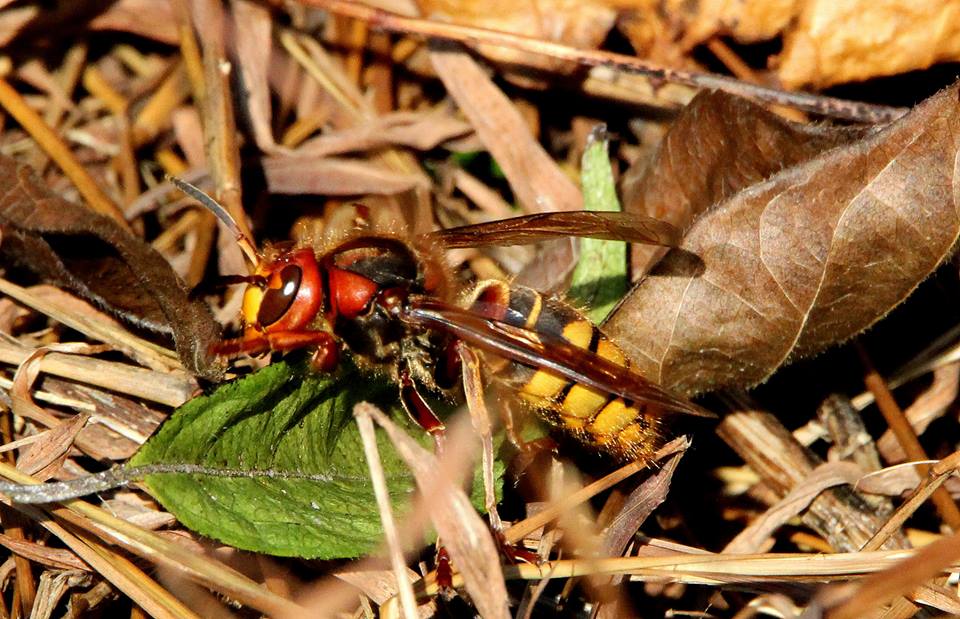 Found A European Hornet (Vespa crabro L.) On A Hike

Through my lifetime of hiking, I have seen many hornets, yellowjackets, wasps etc... Oneday, I was hiking around Middle Creek Wildlife Management Area in Stevens, Pennsylvania which is a 6,000-acre Wildlife Management Area located in Lancaster and Lebanon counties, Pennsylvania. It is managed by the Pennsylvania Game Commission and is a very popular place for migrating Tundra Swans and Snow Geese (posts on those 2 birds to come later). The lakes and area are a great place to relax and easy walking due to being basically on flat lands.

Anyway, on my treck through the area I noticed a large insect buzzing around about 2-3ft from me. As I approached the insect to see what it was, I was stunned at its size and saw that it was a hornet but didn't know what type of hornet. Thank God for technology today and the use of a smart phone :) The insect I found is a European Hornet. My first encounter with a European Hornet and I was excited like a child on Christmas morning. The European Hornet was too cooperative in wanting to be photographed but I was able to fire off several shots of it before it left and I never saw it again. Here are a couple photos and then I will post some facts about these hornets which I found very interesting 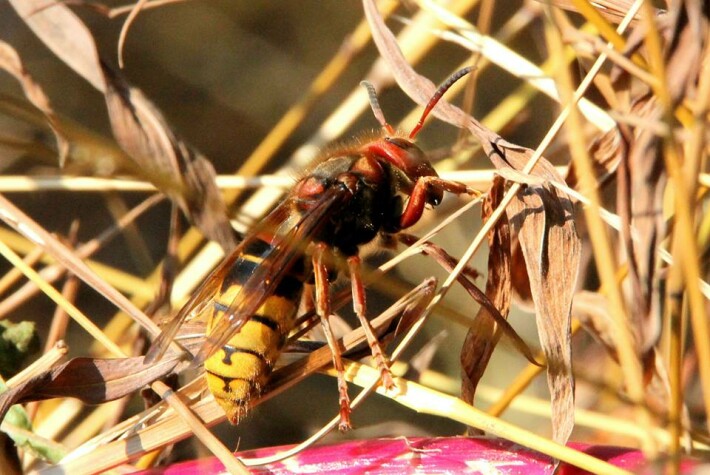 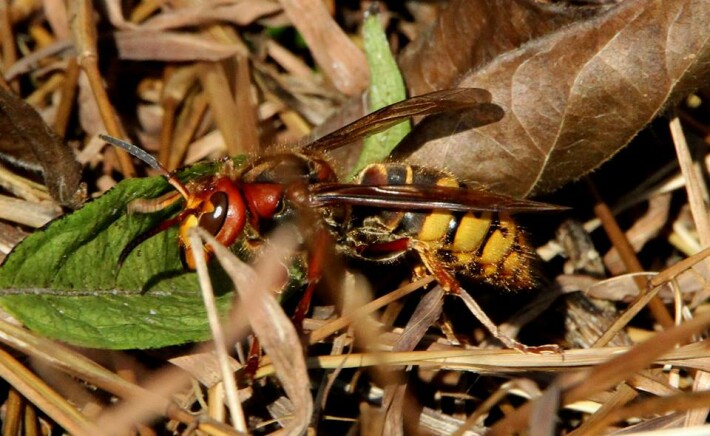 Here are some pretty cool facts about the European Hornet. This info was taken from the Penn State College of Agricultural Sciences, Department of Entomology

The European or giant hornet is an introduced species first reported in the United States in 1840 in New York. Currently, its geographical range extends from the Northeastern states west to the Dakotas, and south to Louisiana and Florida. It belongs to a family of wasps called the vespids, which encompass all of the yellowjackets including the bald-faced hornets. Technically, the European hornet is the only true hornet in North America and is large and will aggressively defend their nests. Homeowners should be cautious when attempting to manage this hornet

The adult European hornet worker is approximately 25 mm in length with yellow and brown coloration (Fig. 1).The overwintering queens are somewhat larger - up to 35 mm. The nests are typically located in a cavity, such as a hollow tree or wall void. They will rarely appear freely suspended like the football-shaped bald-faced hornet nests. The entrance to European hornets' nests are frequently 2 meters (6 feet) or more above ground. In some instances, a portion of the gray, papery nest extends outside the cavity or void 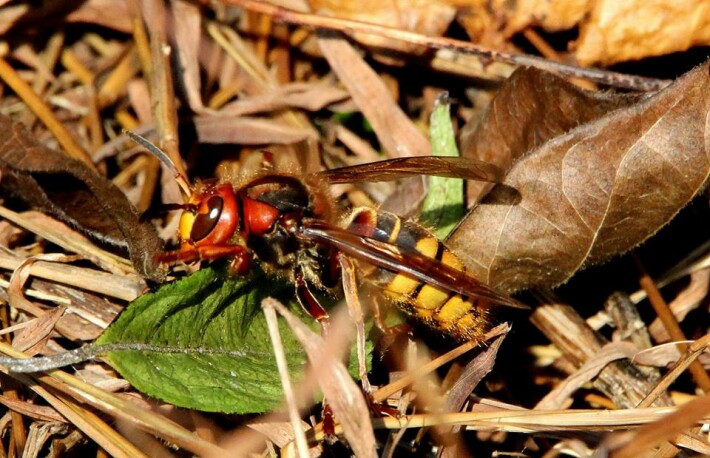 Each fall, the colony produces males and females that mate, and the females become next year's queens. Only the overwintering queens survive in protected sites such as under loose bark, in tree cavities, and in wall voids of buildings. All other colony members produced in the current year will perish.

In the spring, the emerging queens establish new nests in aerial cavities, deposit eggs in cells they have constructed, and feed the first batch of larvae. The larvae mature, pupate in their cells, and then emerge as sterile female workers. These workers take over the responsibility of foraging for food to feed the young larvae, collect cellulose to expand the nest, and protect the nest from external threats. Typical food for the young include crickets, grasshoppers, large flies, caterpillars, and the workers of other yellowjacket species.

European hornet colonies often contain 300 or more workers by September or October (maximum of 800–1,000 workers). These workers are unique among the yellowjackets for their ability (actually a propensity) to forage at night. It is not unusual for workers to bounce off of external lights or house windowpanes during summer nights. Although the workers will sting if handled, they are not normally aggressive unless the colony is threatened.

In addition to the hazard created by their stings, the hornets will also damage various trees and shrubs by girdling the branches and twigs to gather bark for nest building and to obtain nourishment from the sap.

For treatment of European hornets in wall voids of buildings, we advise the use of professional pest control services. Be certain NOT to plug the hornets' entrance because they may chew through interior wall coverings in an attempt to escape and enter the living area. There is evidence that this insect may also attempt to create a new entrance/exit when liquid insecticides are sprayed into the entry. Therefore, to repeat, it is wise to contract with a pest management professional (pest control company) rather than attempting to do this yourself

I am glad I don't see many European Hornets on my travels. They kinda give me the creeps, lol. It surely wouldn't be a good day to swarmed by 300-1,000 European Hornets if you accidently disturb a nest