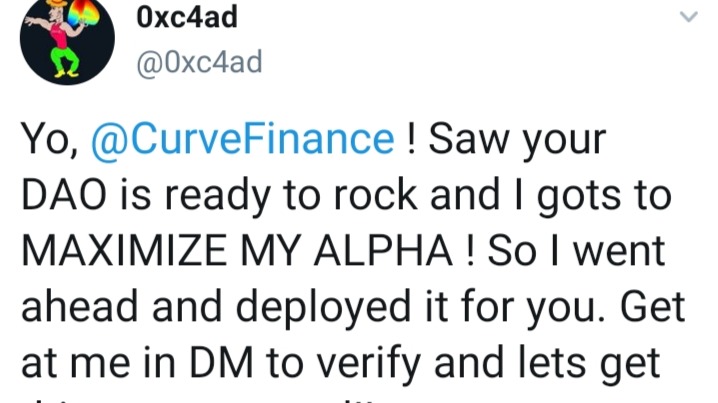 User @0xc4ad triggered an unplanned launch of contracts for managing the Curve DeFi Protocol and distributed its tokens with the CRV before their official announcement. He used the code posted on GitHub, spending 19.9 ETH to deploy it on the Ethereum network.

The Protocol team in response to the hype initially issued tokens by the Scam. A little later, I assumed that the deployment parameters correspond to real ones.

Seven hours after the "incident", Curve recognized the CRV release as valid:

"The deployment was completed with the correct code, data, and administrator keys. Due to the fact that the token and the DAO have started to gain momentum, we have no choice but to accept it ."

Almost immediately after this, the announcement of the listing of CRV for the protection of cryptocurrency exchanges followed. The first was Poloniex.

Tokens have also started to be traded on decentralized exchanges. Some users began to place LP-yCurve tokens inside contracts for staking, with the receipt of CRV. This led to accusations of premining. Analyst Larry Cermak believes that they managed to get 80,000 CRV (2.4 million at the time) before the project team announced the legality of launching tokens.

Three hours later, the mining option became available to all community members. The Curve team deployed the staking system on top of the deployed @ 0xc4ad contract.

This turn of events left many perplexed. Cermak called it "theater" and saw here the abuse of Curve's technical specialists, who turned out to benefit from such a scenario.

According to @Dogetoshi's estimates, Curve accounted for a quarter of all the record figures on DEX in the month of last year.

The CRV token after listing experienced dramatic fluctuations in the range of $ 15.4- $ 53.4 and at the time of writing is trading at $ 16.2. According to CoinGecko, by capitalization, the asset entered the top of the sixth hundred cryptocurrencies.