I have been watching closely what is happening with Turkey and Greece in the last two weeks and the situation is not happy at all. The new tensions between the two countries have increased, even if in the last week the media, especially the European one, did not focus on this subject. I've decided that at the end of the weekend, this Sunday, to share with you some thoughts and opinions on this topic.

All that is needed for things to get on a normal line is for Turkey and Greece to be honest with each other. If things continue, tensions will turn into a real crisis, and the European Union will be attracted and forced to become more involved. Thus, the conflict will turn from a diplomatic crisis between two neighboring countries, into a regional one, which will cover the entire European Union.

That would be the biggest problem. The EU could easily manage tensions between two neighboring states, but total involvement in such a crisis is not a good image and foreign policy exercise. Following this principle, Germany is even actively involved in resolving the dispute between Turkey and Greece, especially now that it holds the presidency of the Council of the European Union. For Angela Merkel, in the 15 years since she led Germany, this is the second time she has held such a presidency and she has firmly stated that the Turkish-Greek crisis is one of the main objectives. 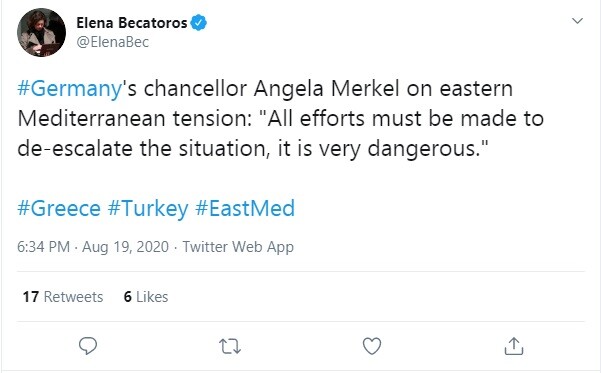 I believe that these tensions could be resolved through honest political dialogue and direct negotiations, without each state imposing unacceptable conditions to the other side. Merkel has the same opinion, who even stated this. It seems funny to me that her speech was misinterpreted by some journalists, even Germans, so that Turkey regards the position of the German chancellor as being on the side of Greece. It seems that some do not want things to return to normal.