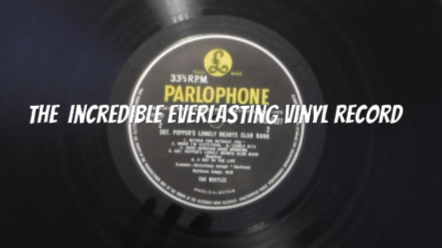 A Brief History of The Incredible Everlasting Vinyl Record

From the late 80s to the early 2000s, vinyl record sales dropped precipitously against competing formats, primarily the compact disc and later, digital MP3 downloadable format. Sales of vinyl records were so severely impacted during this time that it was believed the format would die off. Thanks to die-hard collectors and audiophiles though, there's been a growing resurgence in popularity and record shops have been popping up selling new and hard to find used records. From 2007 to 2017, record sales have experienced a steady rise. In fact, 2017 saw the highest record sales since 1991!

Most people know about records but don't know too much about the history of the vinyl record. There were different formats before the vinyl record, such as edison's cylinders and the more common 78 rpm  record that followed which could hold up to 6 minutes of audio on either side.

The first 12 inch, 33 1/3 RPM flexible vinyl record was produced by RCA Victor in 1930.The stock market suffered a severe downturn the year before and would crash even more over the next two years followed by the Great depression. As a result, the first vinyl records were a flop and the 'Seventy-Eights' remained the primary format through World War II. Even in the early 1950s, the 78 RPM record still accounted for half of record sales.

This didn't mark the end of the vinyl record, however as RCA continued to improve on their technology and finally in 1949, released the first 12 inch Long Play (LP), 33 1/3 rpm 'microgroove' vinyl record. The two years between 1948 - 1950 became known as the 'War of the Speeds' as this was also the time of the first 45 rpm single, the extended play (EP) single and the 10 inch LP. 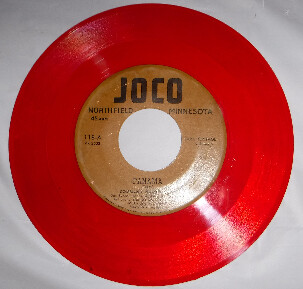 While the 12 and 10 inch LPs gained acceptance in the 1950s, it was the 45 rpm single that would come out the clear winner in the War of the Speeds and would remain dominant for another 35 years. The clear loser was the 10 inch LP which also played at 33 1/3 speed but could only hold 4 songs per side while the 12 inch could easily hold 5 or more songs. Its popularity faded after the 1950s. 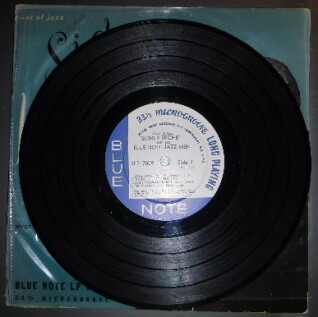 Stereo LPs were around since 1957 but were rare due to associated costs of buying a record and owning a stereo record player system. Practically every record player across america was monophonic so that meant the mono (Monaural) record was going to hang around just a little longer (into the 1970s). There were no FM radio stations back then. AM was the primary means of broadcasting which meant all the music was being heard in mono by the populace.

Then something happened that would change all that. 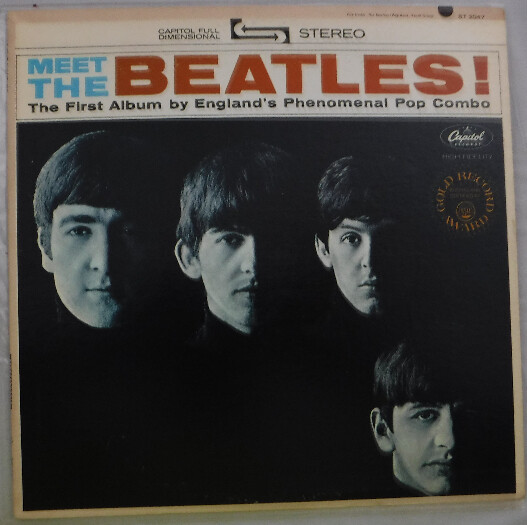 With the release of their ground breaking Capitol Records LP 'Meet The Beatles' on January 20, 1964 in the USA, the 12 inch vinyl record was about to experience an explosive rebirth. From then on, the 12 inch LP and 45 RPM single would be the dominant format for the next two decades. The LP was released in mono and stereo and both versions were a success yet most people aren't aware that the stereo version is regarded as the first mass selling hit 'stereo' LP.

Coincidentally, it would be the Beatles to release one of the last mono LPs, 'Sgt Pepper's Lonely Hearts Club Band' in May / June, 1967. The band spent upwards of three weeks mixing the mono version and only 3 days  to mix the stereo version. True Beatles fans regard the mono version as superior and is now a rare, sought after collectible item. The manufacturing of mono version LPs would cease after 1968 giving this LP extra value. From that point on, stereo becomes the dominant format.

Other formats have competed against vinyl, such as reel to reel tape, 8 track tape and the cassette tape. Of these, the cassette became the dominant tape format throughout the 70s, 80s and into the 90s but as with the others, they all eventually faded. Even the mighty compact disc, although still popular has lost ground to the vinyl record it once took away from.

It looks like vinyl is going to be around a while longer as people such as myself prefer to play vinyl over MP3 which by the way suffer sound degradation when compressed into such a small file, around 5 megabytes. To preserve full sound quality, a digital version should be closer to 100 to 120 megabytes (and up). We may start seeing this format in the future as storage space capacity has increased quite a bit since the introduction of the MP3.

I've noticed in the last few years that music stores have changed their layouts to accommodate vinyl again. Bands also see the value in releasing vinyl versions of their albums, attracting a younger audience to this now vintage but proven format. From personal experience, I've seen (and heard) the quality of vinyl records as those in my own collection, some that were made before I was born. They've stood the test of time and are still in excellent condition today. The music sounds as crisp as the day the records were made.  Of all the different formats out there to store music, it looks like vinyl comes out in front of the pack. Hundreds of years from now, the cardboard cover may have disintegrated completely but the vinyl? 'I've got a feeling' someone will find themselves listening to 'I want to hold your hand' on a record somewhere in the distant future .

With proper care of vinyl records, they can last indefinitely. Some records have become very rare and extremely valuable. While there may be some snap, crackle and pops here and there (and the very light hiss of the original source tape), the full, vibrant sound that vinyl reproduces, well... cannot be reproduced!

Development of the MP3 began in 1987 by the Fraunhofer Institut Integrierte Schaltungen research center.

A brief history of the incredible, dependable zipper!

Those old vinyl LPs might be worth a few $$

A brief history of the Studebaker Corporation Making videos online is easier than ever. Get up to 20% your first year subscription at WeVideo: http://share.wevideo.com/3DSvJS

A Brief History Of...

I enjoy writing brief historical articles. I am especially keen on the histories of companies / manufacturers, primarily those that no longer exist. A good example is the Studebaker Corporation which at one time manufactured cars and trucks and before that, horse-drawn wagons. Other articles may be about the wheel and the camera. My interests are wide so expect neat articles on all sorts of topics. Subscribe to my blog and be notified when new articles are published. Thanks for your support!