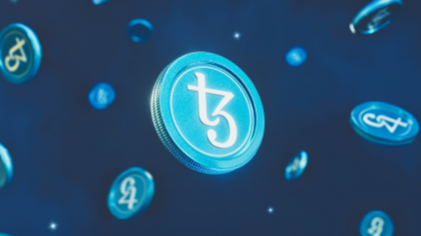 The Tezos Blockchain and its hidden DeFi Gems

Tezos is a proof-of-stake smart contract blockchain that recently started to get more popular. Its design makes it easy to upgrade further and to participate in governance. It has many partnerships and use cases already, Marvel and Redbull Racing are both using it for NFTs, European governments want to create digital IDs with it and Society General is building a digital euro on the blockchain. The marketing that was neglected for a long time is also pretty strong now so it is no surprise that that XTZ has been climbing the ranks of the top cryptocurrencies for the last few weeks.

Tezos seems like a sleeping dragon that is waking up now, considering how much is going on in its ecosystem. But there is one important sector that Tezos is just starting to explore: Decentralized Finance. The blockchain will likely keep growing and with it will its DeFi protocols, so in this early stage there could be some gems hidden amongst them. The tokens of the protocols I want to show you here are moonshots and have not even been listed by Coinmarketcap or Coingecko yet!

QuipuSwap is a decentralized exchange, like Uniswap and Pankcakeswap. Just like with any other DEX you can provide liquidity and earn trading fees and you can trade tokens with each other. The DEX is easy to use and has a unique send feature that lets you choose a different receive address for tokens that you are buying to instantly send them.

The value of a DeFi protocol depends on how much money is locked in it, and currently there are 29 million dollars’ worth of crypto in liquidity pools on Quipuswap. There is still tons of upside potential here, especially because it is often for many people the only option to get new tokens from different protocols that are just starting on Tezos.

The QUIPU token is currently not even listed on Coingecko or Coinmarketcap and is not available on most exchanges. The only way to get any tokens is by using the swap to exchange XTZ for it. The token has a max supply of 10,000,000 and 70% of the supply will be airdropped to early and very active users. When the token launched every address that ever interacted with the swap got at least 5 QUIPU and even more if they there active enough. QUIPU serves as a governance token but it will also be possible to pay fees with the token in the future. 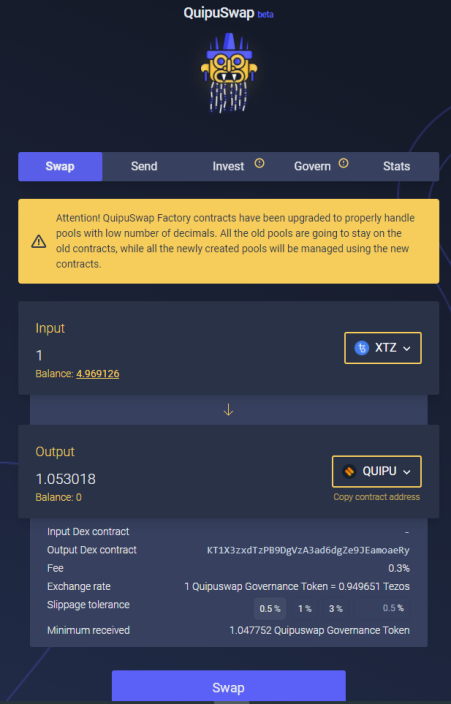 Magic Button is a lottery game, but everyone can earn from it. Basically, XTZ holders can throw 0.1 XTZ into a pool. The last person to add anything before the countdown is over wins 80% of all the XTZ. Anytime someone adds liquidity they receive 1 MAG token. 10% of all the XTZ goes to a "piggy bank" that will distribute its funds to all MAG holders. The remaining 10% and all the staking rewards of all XTZ on the protocol is being paid as dividend to everyone who is staking their MAG tokens.

Currently you can only get MAG tokens by either playing the game or by buying them on Quipuswap. At this early stage you can also farm MAG by staking XTZ-MAG liquidity tokens.

It’s a funny project that could get very popular because unlike normal lotteries, the game also rewards its losers with the opportunity to earn some coins back over time. One thing that should be improved is the duration of a session. The countdown always starts with 100 hours, this is way too much because almost nobody would want to bet XTZ in the beginning because your chances to be the last one are much lower that way.

Plenty is a DEX, similar to QuipuSwap, but it will have some more features. Currently, you can only swap a handful of tokens and farm the governance token PLENTY. Some of its liquidity farms have an APY of more than 2000%, this is because the amount of PLENTY rewarded to users per day is a fixed amount and is divided amongst the liquidity providers and the amount of liquidity is still very low with just 50,000,000 dollars. Just a few days ago the APY was more than 30,000% but it became lower because more liquidity got added.

Plenty DeFi is far from finished because it keeps adding support for new tokens but it has also plans for some kind of lottery, a prediction market and Initial Farm Offerings that make it possible to fund new projects with PLENTY-XTZ Liquidity Pool tokens.

So far, PLENTY can only be bought at QuipuSwap or be earned by providing liquidity to Plenty. The token has a max supply of 62,000,000 and new tokens will get constantly burned with future features. PLENTY is definetly a risky bet but it could be very rewarding. 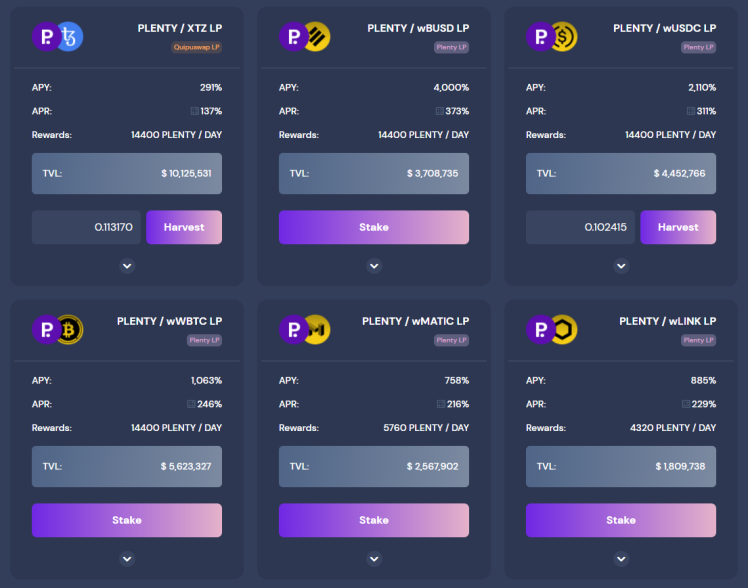