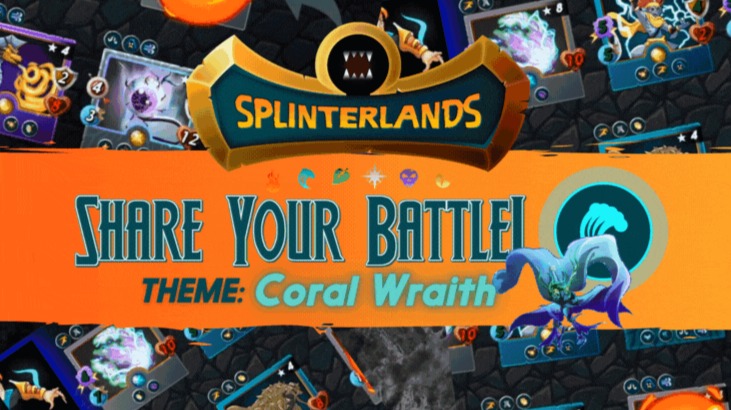 The Next Contestant: Coral Wraith

Ladies and gentlemen, boys and girls, welcome back to 2pPressStart. I'm your host GiantKiller, and today I'm here with my first-ever foray into the Splinterlands Weekly Battle Challenge. There are many like it, but this one is mine. This week's challenger is none other than the Coral Wraith . Now let's get right into the action and see how she(?) fares in the arena this week. 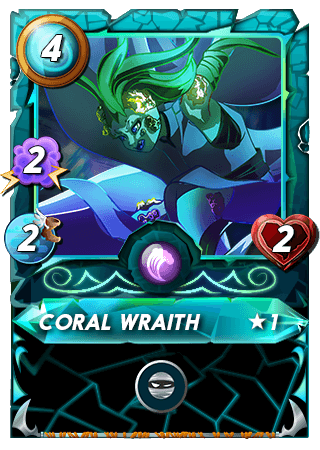 Before we get into the stats, let's judge this book by its cover. The Coral Wraith appears to be the result of letting your cold sore go untreated for far too long, then getting stuck in seaweed and drowning (bad way to go, I'm told), then being brought back to life, but the hapless necromancer couldn't tell where your decomposing corpse ended and the seaweed began, so you ended up being revived as some kind of horrific amalgamation of both.

In terms of gameplay, this little cutie-pie is a Blue/Water epic card featuring (at level 1) 2 magic damage, 2 speed, 2 health, and the Sneak ability. I note that Sneak isn't something we often see on magic users. Thus, my first thought was: she might be pretty good at clearing out low-health back-liners, regardless of armor. 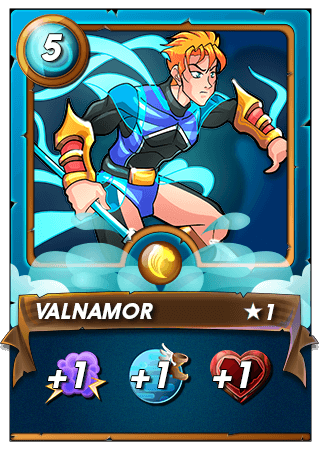 My hypothesis is this: the Coral Wraith should do well in a small-mana pool game with a Summoner who can boost her magic damage. The general strategy will be to form a low-mana-cost magical firing line behind some el-cheapo meat shields and hope I kill the other side's DPS before they kill mine. My recently-rented pal Val just happened to be off of ranked-play cooldown today, so I figured I'd give him a go. He's so ridiculously overpowered (why isn't this guy 7 mana?) that I figured this lineup would give me a better than even chance in Gold III tier, even with my cadre of extremely under-leveled cards.

I ended up finding a 16-mana match with the Earthquake and Target Practice rules. Valnamor led my rag-tag band of misfits into battle. My poor, unsuspecting front liner was the Furious Chicken. She apparently lost the game of "no, *you* go in first," and was followed up by a Creeping Ooze and then a shiny gold Albatross (my only card in this lineup over level one). My gunline featured an Ice Pixie and an Enchanted Pixie, and the Coral Wraith brought up the rear. I was thrilled with my opponent's choices, despite him plopping down a couple of level 6's that dwarfed my team. He led with a Sea Monster (good luck with those Thorns, buddy!), then a Crustacean King (Fortify, ha!), and finally a Pirate Captain. Why was I so happy? My chicken and the rest of my lowbie lineup gave zero clucks about his higher-level abilities. Moreover, his back line were both 3-health monsters, and Mr. Exposed-inner-thighs over here was about to buff the Wraith's magic attack and speed to 3, ensuring she'd fire before El Capitan and kill him in one shot. Here's a Pixie's-eye view of the battlefield just before the carnage began: 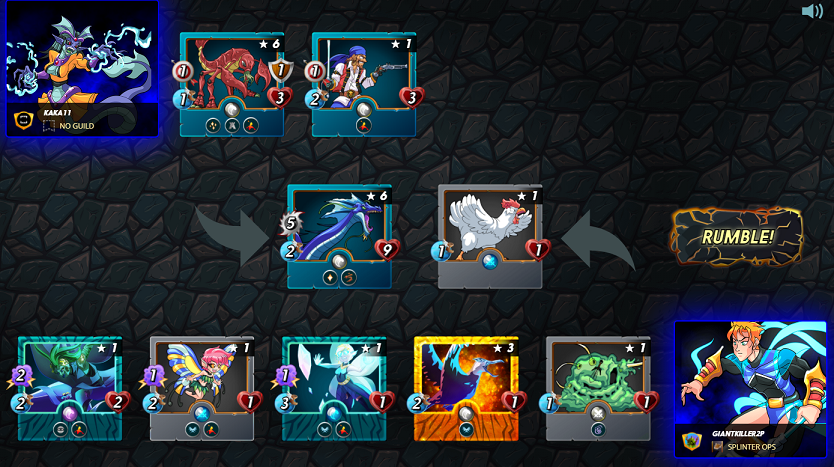 You can watch the entire replay of the battle if you click here. Essentially, everything went according to plan. The Sea Monster obediently ate the snacks I'd set out in front of him one at a time, while my Coral Wraith murdered the Captain in Round 1 (before he could fire a shot), and the Pixie Pals popped off the Red Lobster (thanks to the snipe ability granted by the Target Practice ruleset). From there, another salvo of magical blastification brought the big blue beasty down before he could gobble up all of my brave sacrificial snacks, let alone my shooters. The health buff from Aquaboy even managed to keep the coral wraith alive through the earthquake (seriously, why the *&$# isn't he 7 mana?).

Coral Wraith seems like she can be useful in fairly limited circumstances (like, exactly these circumstances). The Rust ability she gets at level 4 seems really awkward on a caster who is typically going to want to be in magic-buffed teams... which don't usually care about Armor at all. The fact that her magic damage stays at 2 until she's level 6 is poor. This card is going to be low on my priority list to level up, for sure. I think she's got some potential in that 4-mana-limit ruleset, where you're more likely to see small-health targets in the back line for her to pick off sneakily. How would I make her more competitive? Either reduce her mana cost to 3, or move her 3-attack upgrade to Level 3. Either change would move her up my priority list quite a bit.

That's it for this week's Weekly Battle Challenge! What are your thoughts on the Coral Wraith? Does she have any hidden potential I'm just not seeing? Got a great replay where the lumpy lady of the loch carried the team? Let me know in the comments. If you liked this article, (or even if you only just now noticed that Valnamor is wearing a thigh-less wetsuit and a speedo - this man probably grinds on dolphins, I'm just saying.) please leave me a comment, heart, like, thumbs-up, upvote, or free-tip, and consider following me for more Splinterlands and other blockchain gaming shenanigans in the future. Thank you kindly, and happy hunting!

This article is cross-posted from my Hive blog Here.

Crypto and NFT gaming with a hands-on perspective.