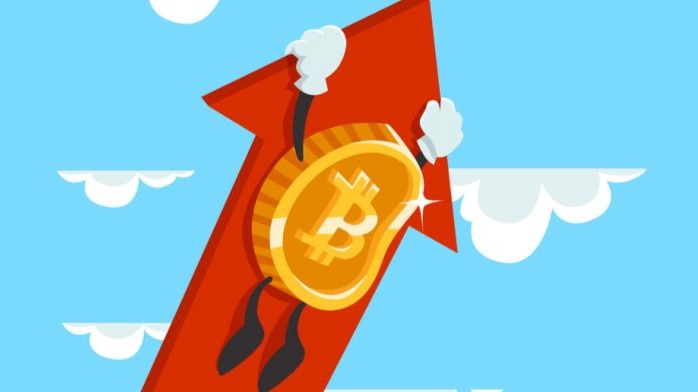 Analyzing the data from the Chicago Mercantile Exchange, which is one of the largest futures contract brokers in the world and also trades bitcoin derivative contracts, I realized that we currently have the largest number of longs recorded since the beginning of the current bullrun. This article aims to study this report as well as do a long-term graphical analysis in order to project possible target prices for bitcoin in the long run.

A report is published weekly showing the amount of orders recorded on each asset that is traded at CME, as it also trades bitcoin derivative contracts we have the report of it. It is important to note that each open contract represents a total of 5 bitcoins. I will present the report below and detail only the most important. 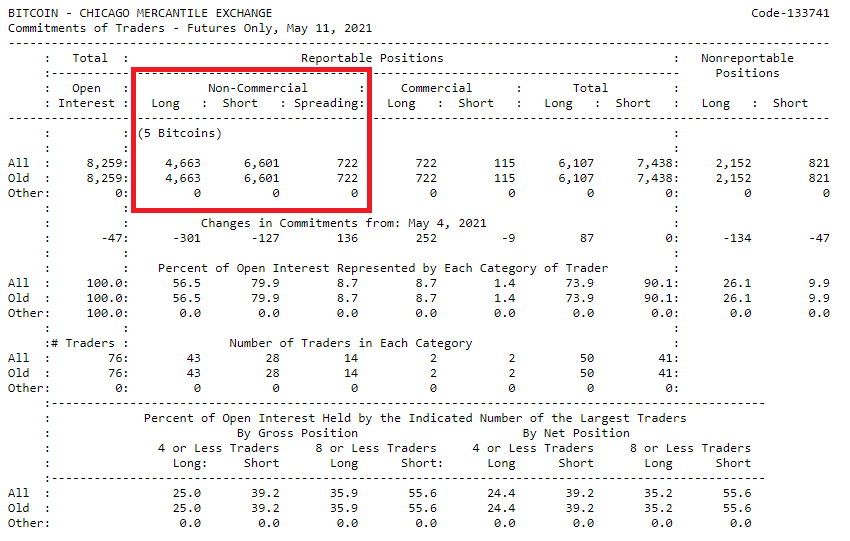 Initially in the report we can see the orders reported in "Non-Commercial" (marked in the red rectangle) and we notice that we have more shorts than open longs. Does this mean that the market is trending downwards? Absolutely not. The traders classified as "Non-Commercial" in this report are "ordinary" traders, not exactly like you and me since they have enough money to open an order of 5 bitcoins and our bank doesn't even approach that, but they are traders who they do not have as much influence on global markets as banks do. Therefore, although it is an important point to keep in mind when setting up your trade strategy, it should not be considered as a key to it. 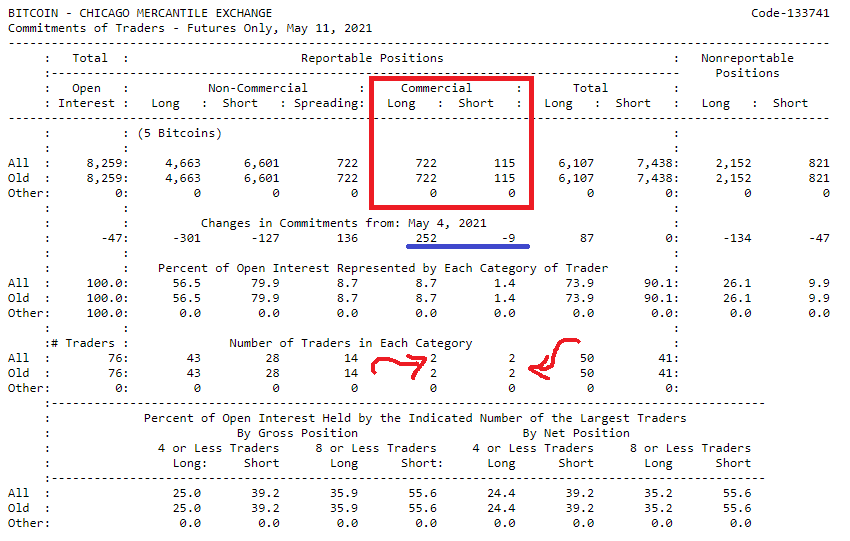 Now the most important part of this report is the "commercial" part that shows the position of the institutions, the banks, then I ask you a question: Have you seen any bank lose money ?. Here we see in the red rectangle that we have 722 Longs positions against 115 Short positions, this clearly shows that there are players betting heavily on a bitcoin price jump, these 722 positions are the largest registered in the current bullrun and may even assume to be the largest already on record, as the bitcoin derivative contracts at CME started at the end of the 2018 bullrun, it is possible to believe that banks were mostly short as the news of that period suggested that the crypto market was a bubble. The numbers underlined in blue also show an increase of 252 long orders from one week to the next, as well as a decrease in the number of shorts. There are then two institutions betting hard on longs in bitcoin and two institutions betting hard on short, as well as a very high number of "ordinary" traders betting on short, given that the financial market is a zero sum market (for one to win, another for have to lose) and that banks are not in a position to lose, I will set up my medium/long-term trading setup on a price rise.

It is also interesting to note that a year ago the first long orders from banks were appearing while everyone was desperate for the post-halving price drop (you can read about it in an article I wrote at the time by clicking here), after that period we saw the price reach levels never seen before.

Before actually starting this part of the article, I would like to clarify that, as a trader, you must be prepared for ALL situations, even though we have fundamentalist indications that the price may rise thanks to the presence of banks in the market, it is not true absolute, the price may fall, so my analysis is also eyeing this possibility. 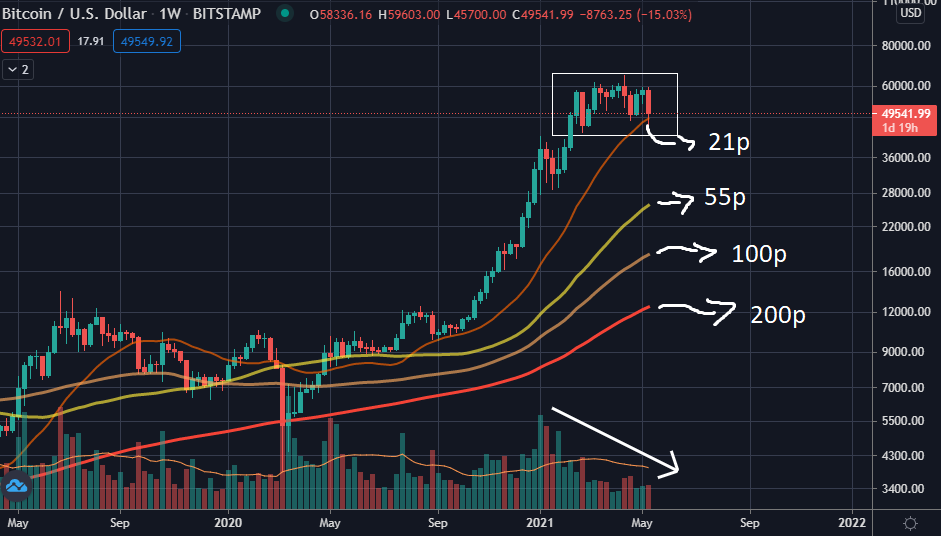 I marked the period of the moving averages in the image to simplify.

The price of bitcoin on the weekly chart has undergone a very strong appreciation since the black swan (mega liquidation in the global market) due to the coronavirus in 2020 always renewing its maximums, currently it has been trading for between $ 45k and $ 60k for several consecutive weeks. Currently on the weekly chart he found the 21-period moving average that managed to hold the price well, it is possible to note that when the price rose above that level after the black swan, he returned to test that level once and then exploded to a new top historical, so this is an important indicator, if the price breaks this moving average down and closes consecutive weeks below it is interesting to prepare for a remainder on the average of 55 periods (but I particularly consider this the least viable possibility). Finally, in this first part, we see the volume constantly falling during this consolidation process, something normal and which opens the door for common action by whales (traders that have a portfolio greater than 1000 bitcoins) to raise the price with those parabolic candles, both for up and down. 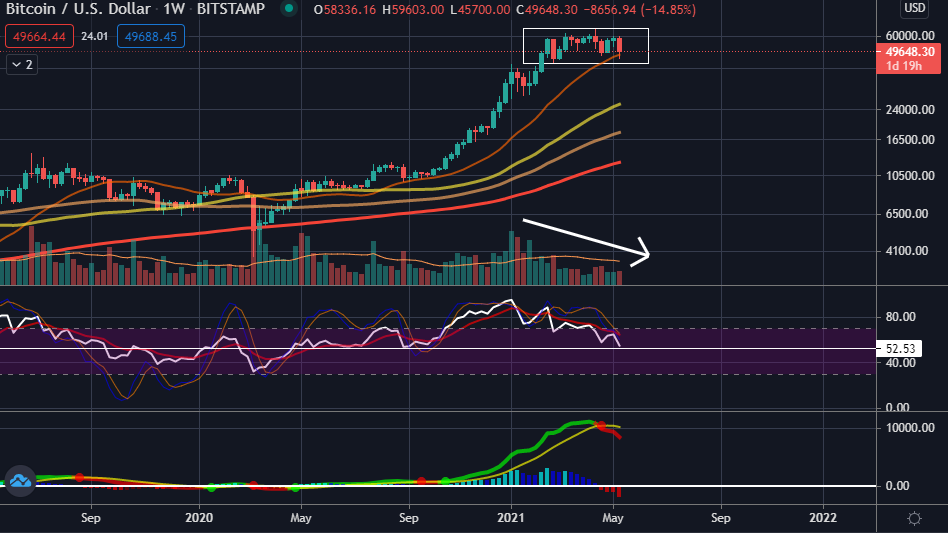 Adding the RSI and MACD indicators we have that this consolidation process after the strong increase is serving to reset the indicators, this is extremely positive since the price is moving sideways. The RSI (top indicator) is my base indicator in this analysis, with the MACD only to assist in the strategies. The RSI is testing support in the important region at around 52 points, note in the graph that after it went above that value, it stayed there and tested that level several times before rising to $ 60k, if it breaks down it is not the time to panic as the upward trend will remain. The MACD stochastics reached levels never registered before, the reading already shows that we are in a bearish period of the bullrun, this indicates that this lateralization may last a few more weeks for these indicators to breathe before a new price jump. 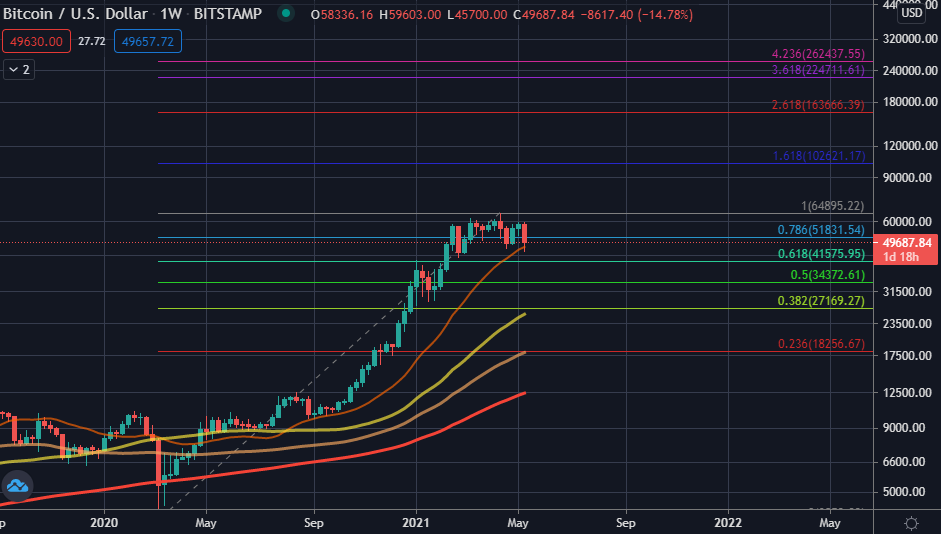 Using the fibonacci retracement we have the most important support points in the medium term, if the price loses support for the 21-period moving average it will not necessarily stop at the average of 55, the important points to keep an eye on are $ 41500 which coincides with the 0.618 retracement and $ 34400 that matches the 0.5 retracement. The target projection based on the last bullish kick shows us four points to keep an eye on after breaking the $ 65k high, which is $ 102k, $ 163k, 224k and $ 262k.

Thank you very much for reading this far, I am coming back to write for this blog after a long time so any questions, suggestions or criticism leave in the comments that I am open to explain or discuss about. If you want me to continue bringing this data from CME, analyze a project or do a long-term analysis of another cryptocurrency, please write in the comments.