To increase network decentralization, the Waves Platform is promoting two incentives for new node owners. so that they can fully assemble a fullnode and that is what we will be dealing with here. The first incentive is the relaunch of the Community Node Program in addition to the Game of Nodes. This may be the best time for you to have your own waves LPOS node. 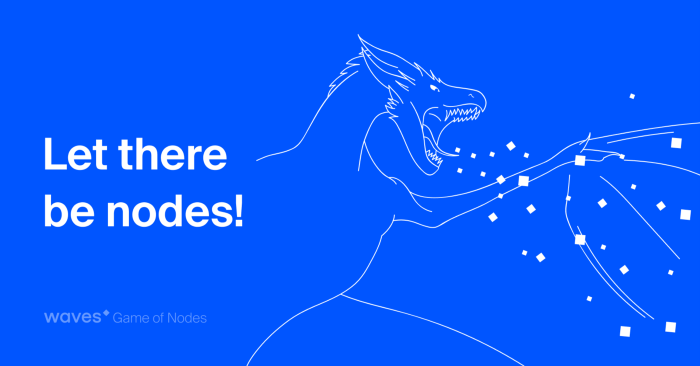 Before I get started I'll be straightforward so you don't waste much time knowing: The Waves Platform is literally providing Waves on Lease to new node owners. Simple and straightforward. Of course it is not something like creating the node, asking for and receiving the pompous lease, it is necessary to fill out the form and certain requirements. So let's get to know this plan;

The fundamental idea of ​​the Community Node Program relaunch has two basic principles, the first to enable new nodes with better mining conditions and leaser gratification, and the second to allow these same new nodes to participate in the Games of Nodes competition to be addressed. further up. Let's understand each of the incentives, which are independent of each other but directly related.

Already mentioned here, in the previous article on the waves platform LPOS, we highlight some aspects of this method of Proof of Stake, however while the LPOS offers a fairer distribution of consensus mining rewards, we should also consider that nodes with a higher amount of Leasers, of course, will have a greater opportunity to generate a block, or more often, even though the proportional difference is not large. The proportionality of having an acceptable ratio is still a relevant factor and dependent on the number of currencies leased on the node.

In short, a node with 50k waves leased will have a better mined block ratio than a node with 1000 Waves, and it was with this in mind that the waves platform created this incentive in the first place: Encouraging new nodes by offering up to 15k waves leased to those who set up new nodes. The first rule for participating in this incentive is to have a minimum of leasing waves at this node, which is 1000 waves and keep it active in the consensus mining condition, to claim program benefit.

Once you have the basic requirement, simply fill out the form with relevant and relevant information to be evaluated and wait up to two weeks for approval. There are other requirements that can improve your assessment to receive the incentive, as well as basic criteria that to keep the incentive on your node you need to have an active node generating blocks and not acting dishonestly with the leaser or program.

The form can be found at https://airtable.com/shrxxcnAKc8zwasxR

The status of your order and all orders placed on the form, including approved, under review and disapproved, can be accessed at https://airtable.com/shrxxcnAKc8zwasxR

The game of nodes is an interesting incentive for new node owners, as it uses a calculation that leads to the small node rather than the large node. Before the calculation let's understand what is the Game of Nodes and what incentive it offers.

Game of Nodes also leases a certain amount of waves to the winning nodes, but only to the top 3 only, however this incentive has significant details. Respectively, the first, second and third places in the Game of Nodes will lease 1 million Waves, 600 thousand waves and 400 thousand waves, which is already a significant instrument for a node, and the lease period is one year.

Just having such a lease on a node would be enough, but as I usually say, Waves Platform is never happy with what it does, and always does something else, so it picks and claims for the winners. The rewards of the award lease will be at the discretion of the node owner, who may decide to either increase the leaser rewards or save it for himself, but this is a matter for the respective node supporters in the competition.

How does the competition work ???

Basically it starts by taking a snapshot of the node list and its total leased waves and every 7 days takes a new snapshot for a period of 8 weeks. So we have the initial snapshot and 8 more snapshots over time.

The basic calculation is the cubic root of the subsequent snapshot minus the cubic root of the previous snapshot multiplied by the production ratio of the blocks the node has on the network, resulting in a number that will be considered the score. In this sense the score found for a node that has increased its leasing waves from 1K to 10K will be much higher and easier to achieve than a node that increases its waves from 1M to 1M and 100k, regardless of the block production ratio found. 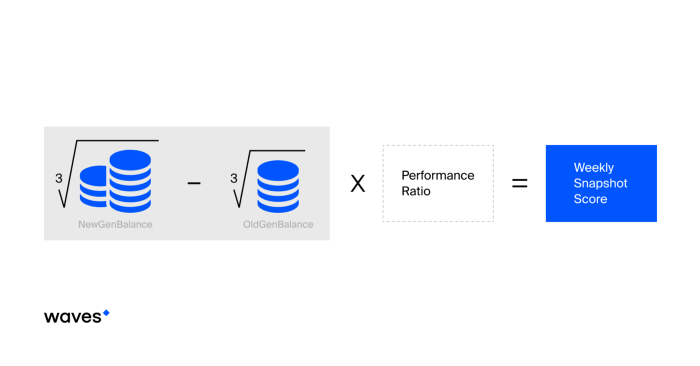 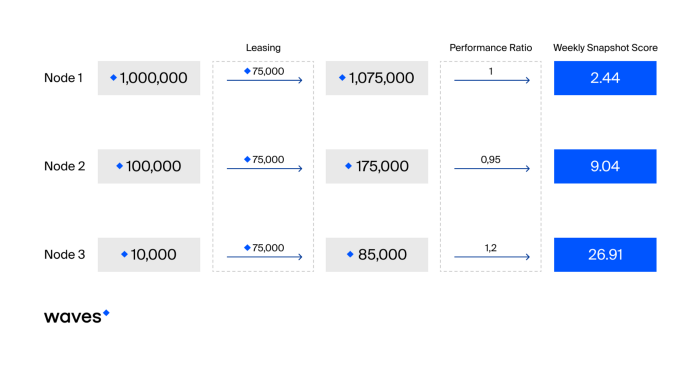 All node-related data, block production ratio and number of coins found on each node, as well as their address and other information can be found at http://dev.pywaves.org/generators-weekly/

And finally, for full competition transparency, Games of Nodes snapshot information and results can be found at https://airtable.com/shrENz8fS5QywuKbm/tblIaVEMD1i2X2rD6/viw3orecmRSmk3QZZ?blocks=hide