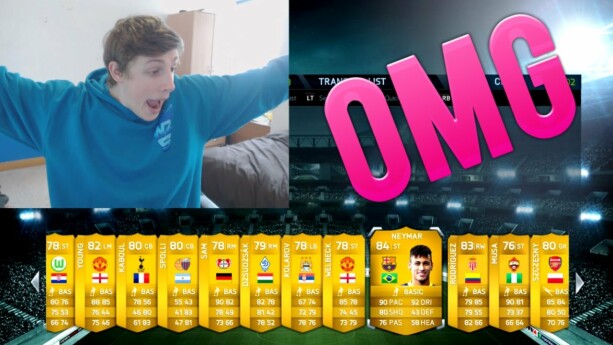 It all started on Youtube. At 15, I played a bit of Madden, but had never even watched a full game of soccer in my life. And I didn't really have any clue what "Ultimate Team" was.

Fast forward to June of 2016, and I was watching random British dudes like W2S open packs of imaginary soccer players. I would religiously watch new uploads from him, and KSI, and a few others. It's like I rode the rollercoaster with them as they opened their packs, pouring thousands of dollars into Ultimate Team. And when I got my first job that summer, I'd work 40 hours a week minimum wage and quite literally dump ALL of it into Madden and FIFA ultimate team. I would buy 20 dollars worth at first, and open all of the packs. If I got shitty players, well I'd resolve to buying one more pack to try and walk away from things with a better team. And, lo and behold, when I'd eventually get a really good player, I'd tell myself to keep the streak going.  "Fuck yeah, you just got 99 overall Ray Lewis. Wonder what else you can get?"

And just like that, I was a 15 year old chasing the rush of gambling. That's all Ultimate Team was. Gambling. You throw your money at the CHANCE to MAYBE get some good players.

By the end of that summer, I was as broke as I started. I frustratedly did the math, and holy fuck. I had spend THOUSANDS of dollars on opening packs of imaginary cards on a video game that LITERALLY HAD A MAXIMUM LIFE CYCLE OF ONE YEAR.

What the fuck? I asked myself that question lots of times, before finally getting over it. "Well, at least I learned my lesson about gambling early on. Won't make that mistake again."

Hah. Dumb motherfucker. You'll manage to go 4 or 5 years without any real gambling fix. You buy scratch off tickets here and there, you make some 20 dollar gambles on the stock market, but you don't ever binge like you did back in the day. You never let it really be an addiction.

And then one day you get a cute little ad for DraftKings Sportsbook. The promo deposit bonus is real enticing, and you never thought of betting on sports before. And hey, you know a lot about sports, right? Why not give this a shot?

Oh shit! I just won 500 bucks! I am a sports betting GOD! I KNOW ALL THE FUTURE OUTCOMES SUCK MY DICK!

Let's spread that 500 back out and win even more!

Aaaaaaaand....FUCK! FUCK! I JUST LOST 500 DOLLARS ON A BUNCH OF PARLAYS!

God damnit, gotta deposit 500. We'll shake back. I'll win it all back on one bet and we'll start fresh. I did so good! I'll hit again!

Before you know it, you've bet your savings and rent money on the match point of a Russian Women's Tennis Game. You don't even know how to score a fucking point in tennis. You've never picked up a racket. What the fuck are you doing?

Ultimately (pun intended) there is something to be said about how EA sports so thoughtlessly integrated an element of gambling into a game predominantly played by kids. I know countless stories of kids taking their parents' credit card and racking up hundreds of dollars of charges on Ultimate Team packs, or hell even chests for weapon skins on CSGO. It became a real problem when UT exploded in popularity around 2014 and hasn't been addressed in any meaningful way. As for myself, I had to delete DraftKings. I cannot meaningfully place the entire blame of my gambling addiction on FIFA or EA or anyone but myself. However, I do wonder if I had never been given that introduction to gambling back in the day, if I would've made the same mistakes later on. But one can always wonder.

(also, a special fuck you to Ben Askren. I bet the mortgage on you beating Jake Paul's ass. And you show up to the fight like THAAAT? Your boxing stance looked like THAAAT? What the fuck, man! Definitely lost almost a grand on you, asshole.)

Brevity is the wit of man. I am not very witty.

I write about a whole lot of things and a whole lot of nothing at the same time. If you find any portion of what I write valuable, my time writing was well spent.