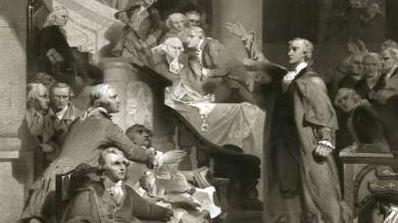 Put your money where your mouth is

NOTE: In preparation for writing this article, I found that some of the things I had "known" were wrong. The most glaring item was that of Patrick Henry's speech at St. John's Church in Richmond, Virginia, before the Second Virginia Convention in March of 1775.

I had always believed, incorrectly, that during Henry's "Give me liberty, or give me death!" speech he had been summarily assassinated by someone there in the hall.

It turns out that he died at his Red Hill estate some 24 years later.

Lately, I have been contemplating this virus that is overshadowing the entire globe. And to think outside the box is unacceptable.

I haunt several social media platforms. A couple are mainstream. Most are not.

I find that the mindset is vastly different between the different types. One thing that I do find in common, however, is that many people say that they will not take the vaccine when it is brought forth later this year or early next.

Do they really mean it?

Patrick Henry was, from most accounts, a brilliant lawer and orator. Two of his most noteworthy arguments were the Parson's Case (1763) and one delivered to the Virginia House of Burgesses against the British Stamp Act (1765).

In 1775, he gave his impassioned speech at St. John's Church. Henry did not use notes and there are no transcripts of the proceedings. The address was reconstructed by William Wirt in 1817, for Henry's biography. Some historians speculate that the quote may have been fabricated to increase book sales. SRC

“Gentlemen may cry, ‘Peace, Peace,’ but there is no peace. The war is actually begun! The next gale that sweeps from the north will bring to our ears the clash of resounding arms! Our brethren are already in the field! Why stand we here idle? ... Is life so dear, or peace so sweet, as to be purchased at the price of chains and slavery? Forbid it, Almighty God! I know not what course others may take; but as for me, give me liberty, or give me death!"

Another thing to consider is this: signing the Declaration of Independance did not bode well for some of the signators.

These were all men who put their money where their mouth was. They laid everything on the line.

When the time comes and the vaccinations roll out, who of those declaring they would not consent will have the intestinal fortitude to follow through?

How many will be willing to be imprisoned? to die?

I figure the number will be incredibly low.

I don't necessarily trust these citations. Do your own research.