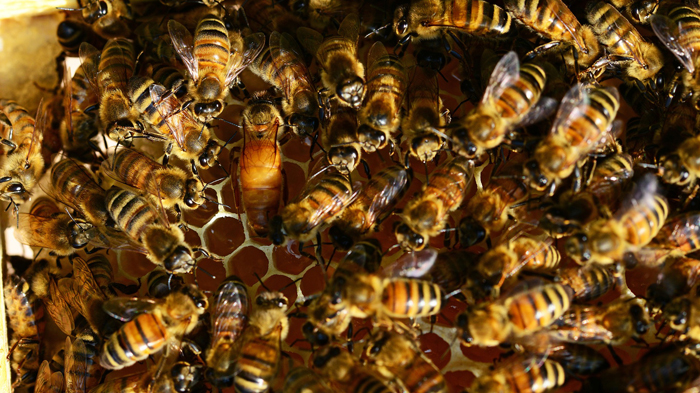 There is a guy for whom I do occasional side work. Our company had done work in his house a little more than a year ago. He'd asked one of our journeymen to do some work for him but the journeyman handed it over to me.

The guy for whom I do work - I'll call him Don - and I share an interest: Bees.

Before Don and his family moved into the house, he would come by every now and then to see how we were progressing. We got into discussions about several things including hunting and gardening. I told him about the bees that I had and after some time he decided that he would get a couple of hives.

A few months ago Don called me up to do a little work. While I was there we checked on his bees. The two hives were doing extremely well. We talked for a few minutes and decided to do a forced split of his hives.

We pulled a frame of honey and a frame of brood from each hive and placed them in a small nuclear (nuc) hive. We made sure that the queens stayed with the original hives. We replaced the frames with empty ones.

The nuc now had two frames from each hive and one empty one. Even though the bees in the new hive were from different hives, they worked together because they had no queen in their hive.

The brood frames each had older brood and newly laid eggs in them. If a hive loses their queen for some reason but still has new eggs or larvae that is no more than two or three days old, they can raise a new queen.

The bees pick three or four good candidates and enlarge the cell to accommodate a queen. They feed these larvae royal jelly until they pupate.

The first new queen that emerges from her cell goes through the hive looking for other queen cells. When she finds them, she stings and kills the other queens.

If a new queen is hatched in a thriving hive, she and the old queen will co-exist for a few days after which either the new or old queen will leave the hive with half the workers to establish a new hive somewhere else.

I was at Don's house this weekend doing some work and asked about his bees. He said that the split was doing so well that he packed it up and carried it to the country and left it on the sheltered side of a hill in the woods where he hunts.

Split? I had completely forgotten that I'd helped him split his hives!

He said that the other two seemed to be doing well also but that they'd not stored away much honey over the summer.

Golden rod is blooming here. That is the last nectar run of the year. Don will have to feed his bees sugar water daily all during the winter.

They may make it through to spring. They may not.

I hope they do. I'd like to pull a split off his hives next year.