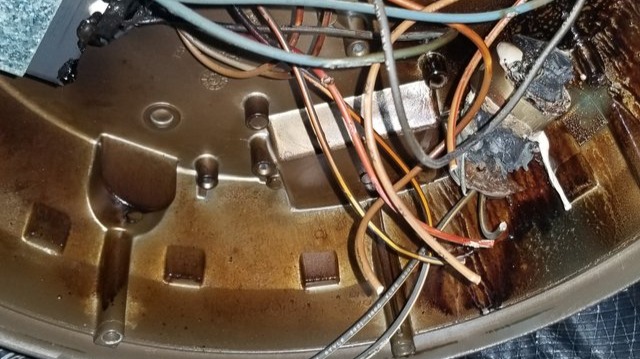 Today, I had to replace some HID (High Intensity Discharge) lights in a parking garage. The old ones were sodium lights which run very hot. I replaced them with a large LED fixture.

For the most part, everything came down and went back up fairly easily.

Then I got to the last one.

Did I mention these things run hot?

I don't know which happened first but two of the components cascaded.

This thing is, or was, a capacitor used to start up the bulb. What was left was just a shell with the wires sticking into it. I didn't even look at the anode and cathode plates on the inside. Perhaps it broke down and the plates touched causing the transformer to short out. The transformer went into meltdown mode too. Here is a picture of the heat shield that covers all this mess. The light bulb would screw into the under side. Had this fixture not been on a concrete ceiling, there could have been a fire.

I tried to get this thing off the bracket holding it to the ceiling but apparently it got hot enough that the die cast aluminum melted some and stuck to the bracket.

I banged on it with a hammer trying to get it freed up. The parts of the housing close to the capacitor shattered like glass but I couldn't get it loose.

One of us will have to go back later and cut it out with a vibrating multi-tool.

I'd suggest replacing any HIDs you may have with LEDs to get rid of heat problems. They tend to be cheaper to operate too.