Upland to the Lowlands: My plea for Amsterdam (MyUplandCity)
MyCryptoOutlook2022 BitYard Contest and Giveaway - $1,200 in ETH Prizes! >> JOIN FROM HERE << 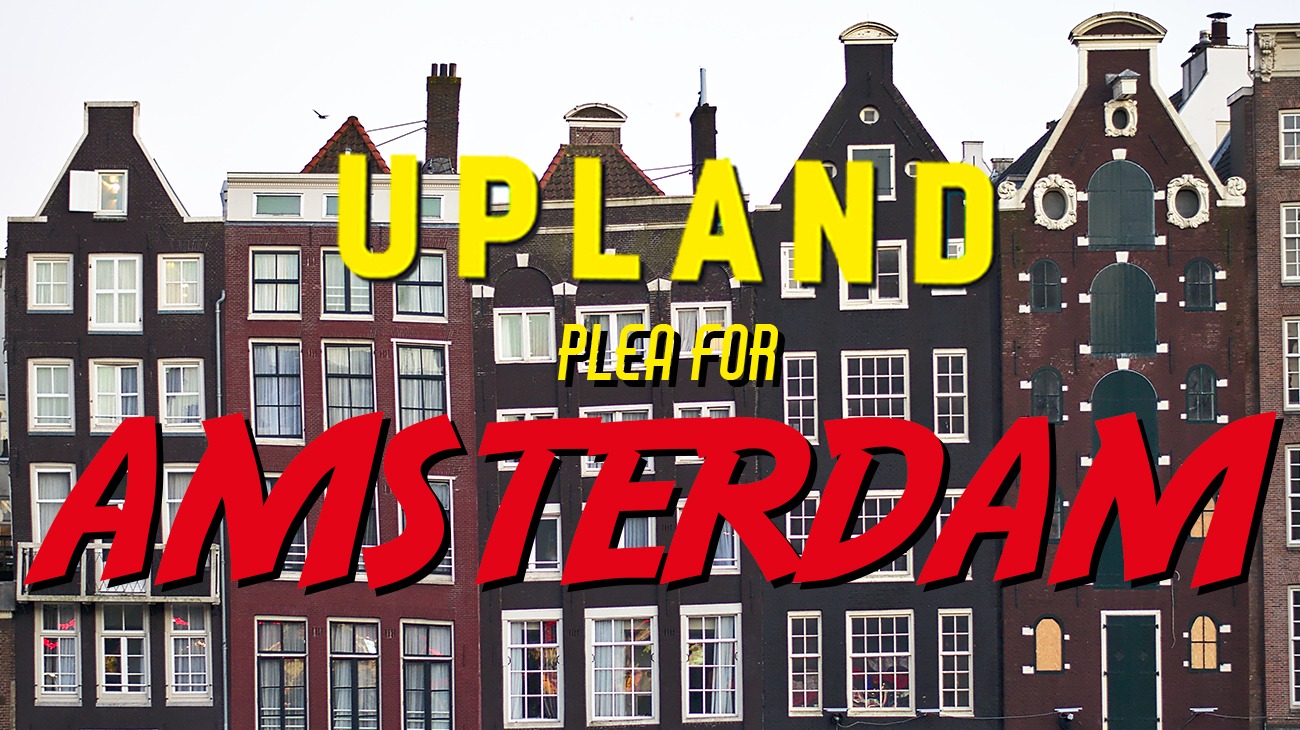 Upland to the Lowlands: My plea for Amsterdam (MyUplandCity)

As the Upland metaverse is rapidly expanding, all of the non USA players are eagerly awaiting when the international minting begins. It is not a question if, but more when, and even more where? If Miles is ready to cross the Atlantic to Europe, it is very likely he will come to Amsterdam - just like the approximately 19 million tourists that visit this city every year (while the population is less than 1 million).

Why would Amsterdam be the perfect city for Upland? Of course, I could try and tempt you with sex workers, weed and cheese (without this it wouldn't truly be Amsterdam), but it would also be great to show that Amsterdam has much more to offer. And also, to learn people who are not from the Netherlands know that Amsterdam is a city and not a country haha!

The cool thing about Amsterdam is that Amsterdam is built up from circles, so the center is surrounded with canals (called gracht in Dutch), with another layer around that, and so on. This makes the shape of Amsterdam very natural and unique compared to the current Upland cities in the USA. 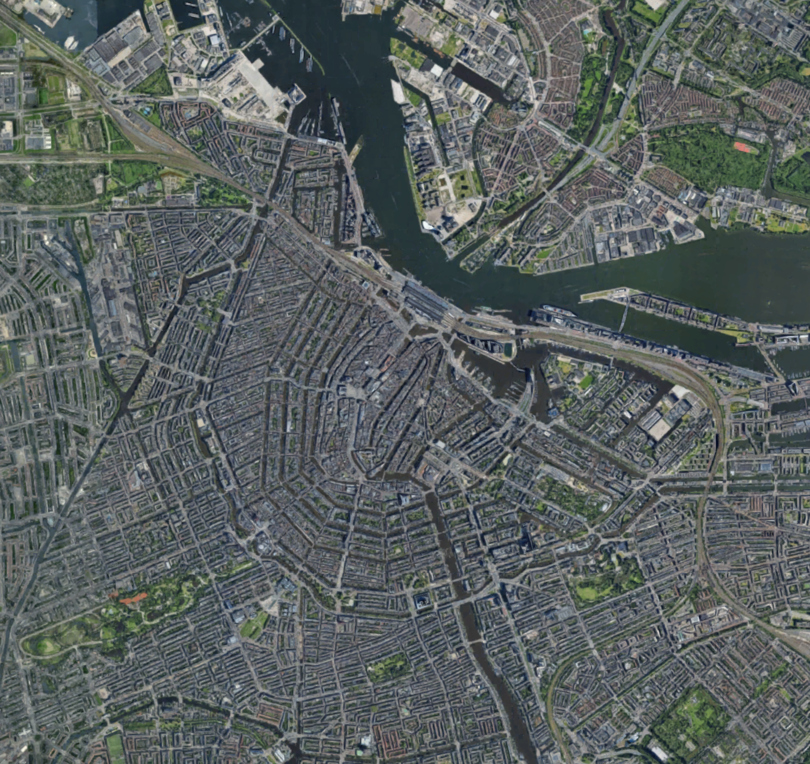 Let me take you on a short city trip through virtual Amsterdam, the Lowland of Upland. This is my plea for Amsterdam as an Upland city in the future, but also a guide for all of the tourists that come and visit in the real world (please don't stick to the first location, there is so much more to see!):

Well we can't do Amsterdam without the Red Light Collection, or as we call this area in Dutch: De Wallen. If you visited Amsterdam you would've probably visited this area. Yes, just admit it, no shame in that as it is right in the center of Amsterdam so it's quite difficult to avoid it. It is famous because of the window prostitution (a typically Dutch form of sex work where you literally have a 'display') and erotic nightlife like the Bananabar and Casa Rosso, but there is so much more to explore in this area. This is the oldest part of Amsterdam, so there is a lot of historical value. Like the Oude Kerk, the oldest building (a church from the 13th century) in Amsterdam. Another interesting church is the Ons Liever Heer op Solder (literal translation: Our Dear Lord In The Attic). It is a secret church, stemming from the time that Catholicism was still forbidden. Even a part of the University of Amsterdam is situated at the Wallen area (definetely check out Oudemanhuispoort, a hidden University spot with a small vintage book market in the hallway). So when you visit Amsterdam, don't let the red lights and smell of weed blind you, and try to also see past that.

Let's get out of the city center, and explore a part of Amsterdam that is often overlooked: Amsterdam North. You can access the north of Amsterdam by taking the (free) ferry over the IJ river, behind Amsterdam Central Station. North is also known as Noord Gestoord ("Crazy North"). This nickname could perhaps come from the history of this part of Amsterdam. In the Middle Ages, it actually was a gallows field, where criminals were hanged as punishment. This way it also served as a warning for anyone entering Amsterdam by boat. Of course, those days are long gone now. North is known for the combination of flats and tuindorpen, which translates to "garden village". These are neighborhoods with small family homes and a gardens, to make sure that that the working class also has a better place to live than the old housing projects. Besides that North also has a really industrial area near the water called NDSM, and some landmarks (who are actually quite new): ADAM Tower (used to be the office of Shell, but now it is a watchtower/restaurant/club/etc.) and The Eye (the film museum). 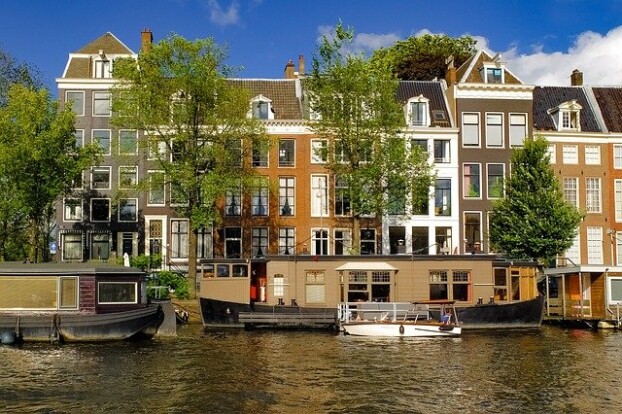 Just like almost a quarter of The Netherlands, Amsterdam is below sea level (at least 2 meters, at some places even 4 meters below the sea). But we Dutchies we have learned to live with water. We even do that by living on the water, with houseboats. Houseboats may seem small, but they actually are very desirable to live in! And with Amsterdam forever expandiing, people are creatively looking to places to live. One of these projects is Schoonschip (which literally means "a clean ship", but also is a saying that means "coming clean"): a sustainable floating neighborhood. With Upland committing to a sustainable mission, this perhaps would be a nice way to integrate into the building feature of Upland. Rebuilding the world on the water, inspired by this sustainable housing project. For instance a solar panel feature in the game?

A lot of the landmarks in Amsterdam are musea. Museum Square in the center of Amsterdam is the home of a lot of musea, like the classic Rijksmuseum, but also the Stedelijk Museum ("City Museum", with modern art). The last one is also know as "the Bathtub", because the architectual design resembles a huge bathtub. But also outside this square there are a lot of musea that have landmark potential. NEMO, the kids science museum, is for instance a big copper green building that is build on top of the tunnel that leads to Amsterdam North. 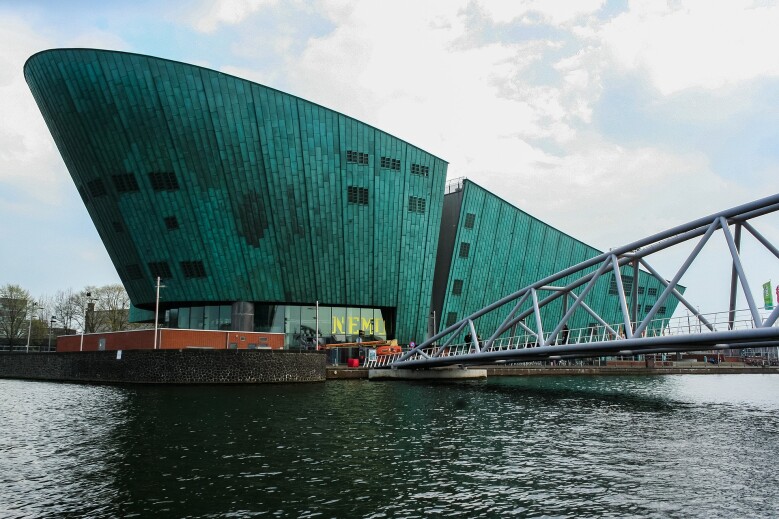 An interesting event that I would love to highlight as well is that Amsterdam has a very good art route every two years, called ArtZuid. It is an art biennale where you can see fifty artworks exhibited outside in small parks and green strips between the roads. Below you see one of the artworks that I came across on the Churchilllaan between the tram tracks, a few years ago. A statue of tightrope walker that moves by the wind but always maintained her balance. Perhaps Art NFTs could be integrated into Upland in the future, so that artists can display their digital art and earn real money from it as well. 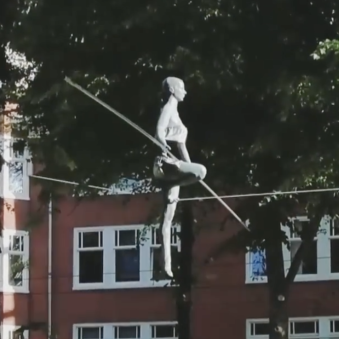 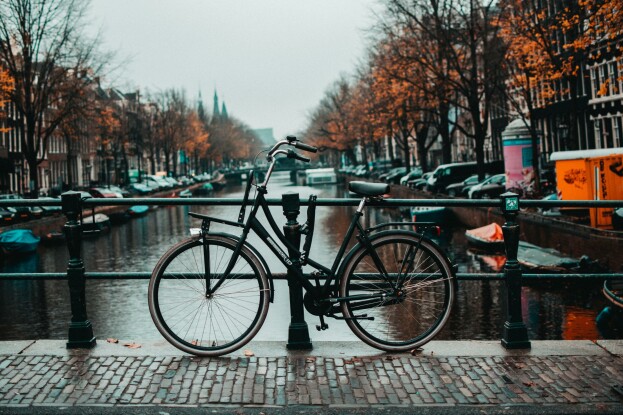 The last element I would like to add to my plea for Amsterdam is: bikes! There are more bikes in Amsterdam than inhabitants. So wouldn't it be cool that if/when personal vehicles get integrated into Upland, we need to head over to Amsterdam for the bike release. That way we could do a tour by bike to all of the areas that I haven't mentioned yet, because there still is so much more to see. The Bijlmer area has the best Surinam food, The Indische buurt (Indonesian neighborhood) has in my opinion the best cafe area, and the Jordaan is the home of many Dutch folk singers. And I even did not mention important events like Koningsdag (Kingsday), Gay Pride and ADE (Amsterdam Dance Events). There are so many arguments why Amsterdam would be perfect for Upland.

Important message if you are a tourist and in Amsterdam: watch out! Riding bikes comes so natural to Dutchies, it can be a bit overwhelming for a foreigner at first. A big tip: don't get stuck in the tram tracks!

Unfortunately I don't have a selfie to share (as I don't make any selfies, but also because I cannot choose what prop I would be racing to because there are so many goodies to pick from!). I do know where Miles would race to: the Pontsteiger! Literally it translates to "Ferry Dock", but it is way more fancy than the name would suggest. This apartment building is home to the most expensive home in Amsterdam! So of course Miles would see the UPX potential there, as the sleek landlord that he is. I actually came across a selfie of him with this particular prop! 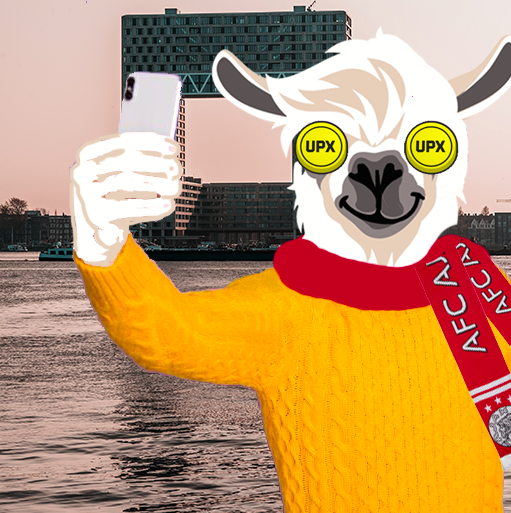 I hope you enjoyed my pitch for Amsterdam as Upland city! And let me know in the comments down below if you want to visit Amsterdam and need some specific tips outside of the usual tourist locations (my specialties are craft beer locations and hidden gems). Thanks for reading! 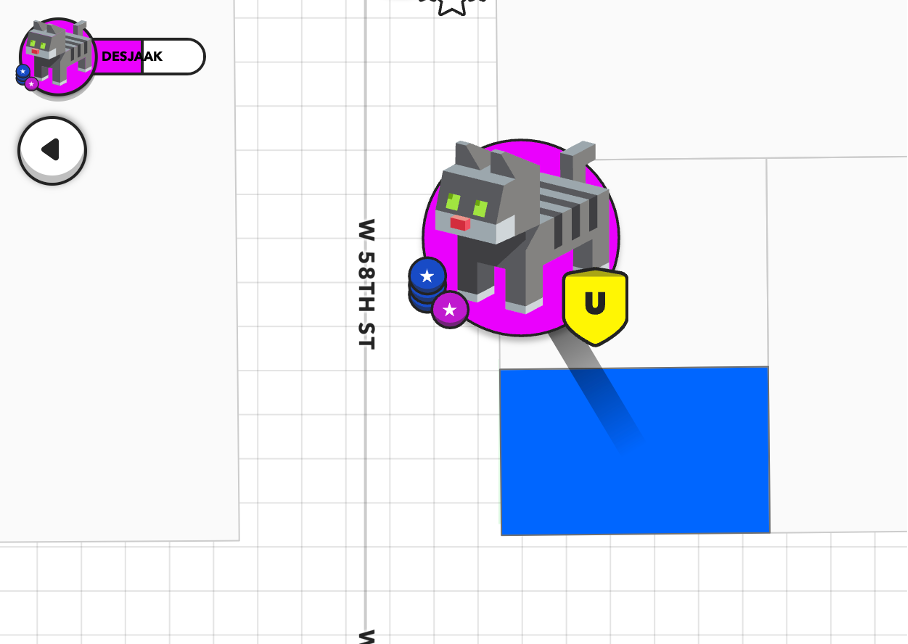 I am into crypto since 2017, mainly as a hodler with some periods of swing trading. Currently starting out on Upland (an NTF game on the EOS blockchain), so I will share some more newbie friendly info on this game - as it so much deserves!

Upland, a relatively new and exciting property trading game, situated on the EOS blockchain. In this blog I will share crucial information for beginners (how to start in Upland, what mistakes NOT to make, and how to continue once your an Uplander), but also dive deeper into the fundamentals of the game as it continues to develop. 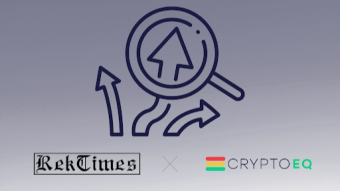 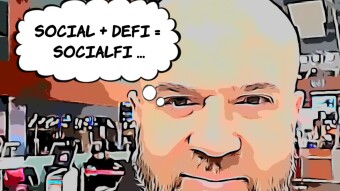 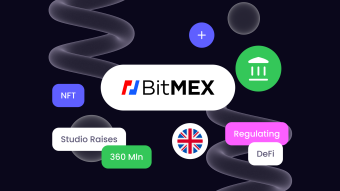