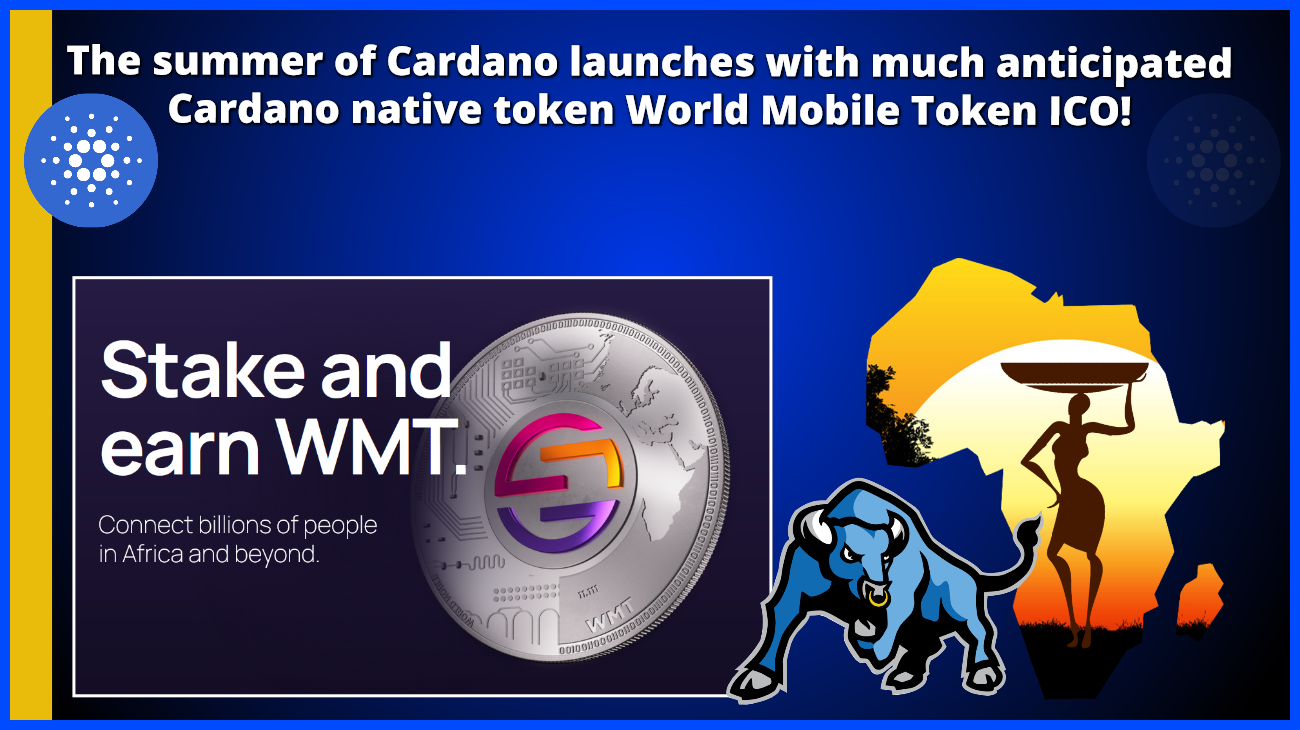 After having dipped my tows into the science of Bitcoin, Ethereum and Cardano as detailed in previous articles I like to tell you more about the World Mobile Token ICO and the project itself.

Let's dive into the content through a new angle: Blockchain Generation Types 1, 2, and 3. And of course: World Mobile Token.

Bitcoin, as well as almost all of its first clones were simple blockchains, only able to allow for peer-to-peer and trust-less instantaneous sending of value. simple, yet groundbreaking! Money or better currency can be anything we allow it to be, in the case of blockchain: a series of bits and bytes are given value. It's nothing more than a byzantine resistant global network and a convenient way to send a deflationary asset that runs on a super cool incorruptible algorithm. As mentioned by Elon Musk, who individually made the market tank by $200 billion USD just recently, Bitcoin consumes a lot of electricity and this is a problem that needs a solution. Bitcoin has become a store of value asset and will probably not be used as a currency, which is why governments aren't bothered by it. It competes with gold bullion, not with the USD or the EURO. It is simply not used in daily groceries shopping now is it? However, it can still make a 10x to reach gold's $10 trillion USD market cap. If the world wants a digital gold-backed reserve currency or basket of currencies, for the digital internet of value economy, then Bitcoin is the ideal candidate! Just like Central Banks store gold, Bitcoin is mainly stored as a reserve asset. But things can still change. But one thing is clear: governments can not write code for a CBDC on the Bitcoin network.

Ethereum was the first smart contract blockchain network, allowing developers to program the currencies they created on the Ethereum blockchain, called ETH tokens. In other words: programmable money. The ICO bubble followed. Now we're of to DeFi and NFT's. The Ethereum network has become so popular that the network in it's current shape can not deal with the overload leading to high gas fees or transaction fees. The upgrade to Eth 2.0, promises to change that and the rich and famous are now starting to invest in Ethereum, after initially having invested in Bitcoin only. The recent news that the European Investment Bank (EIB) is launching a 100 million euro offering in digital bonds on the Ethereum blockchain is a vast sign that Ethereum is in their cross-hairs, and I'm sure that CBDC pilots are already being created and tested.

Despite network congestion and some minor other challenges, I assume that Ethereum will remain the leading smart contract ecosystem for the coming years. Ethereum's transition from Proof of Work to Proof of Stake might make it suitable as currency for Elon who wants energy efficiency, if he can say goodbye to his darling Doge.

Cardano started as Proof of Stake from day 1, and is the child of Charles Hoskinson, a man on a mission to finally include the under-, and unbanked into his new global financial operating system: Cardano! To create Cardano, Charles and his team took a long, yet problem-solving, academic road-trip, joined by universities, research centers and leading PhD's and decided to solve the problems coherent with Generation Type 2 Blockchains: scalability, interoperability and sustainability.

The result will be an all-inclusive financial ecosystem that even pays for its own maintenance and development going forwards. After an immense effort to study the whole cryptocurrency sector, Cardano is now ready for an explosive summer with the launch of the first Cardano native tokens. One of these projects is World Mobile Token.

I am confident that Cardano will offer under, -or unbanked people a choice: they can choose decentralization or they can adopt the Chinese Renminbi, another example of a distributed ledger driven currency, but one completely controlled by Beijing. And the window of opportunity is closing as the Renminbi launches in 2022. China will lend people renminbi, setting them up for a debt-enslavement when they can not repay the interest on the renminbi loans that are coming! Let's not be naive.

World Mobile Token is a project that offers these people an opportunity to become citizens of a global and digital economy by using new infrastructure, including the solar power needed to operate it. Many of these people aren't on any big tech radar and this offers them a solution, which will in a few years turn out to be a huge thing!

The African continent has long been plundered by western nations, who were guilty of all kinds of atrocities against African people: this is their chance to escape the inherent corruption within their governments by opting out and choosing an incorruptible blockchain currency solution, that ties them to the rich citizens of privileged countries such as Europe , the United States, and others.

The ambitions of the World Mobile Team are:

A Tanzanian village and home to about 200 people is a perfect example of how the integration of these services sparked a whole new world of opportunities for these people who were left behind, yet now successfully transformed the way they work and live. Through World Mobile, they now have digital ID's, access to microcredit services, online banking and healthcare.

These fishermen and their families also have the opportunity to enrich their lives by learning, following news, messaging friends and families and closing business deals. After one year their businesses have grown, their profits have quintupled and their shops and bars have tripled.

The ICO will go live soon.