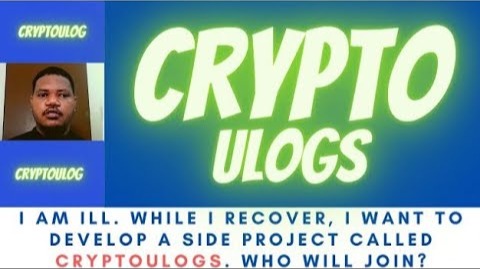 Gradually Formulating The ColorlessPaper For Our Side-Project 'CryptoUlogs'. Part One.

Story and history of Ulogs.

Like blogs or vlogs, ulogs will become known to the globe as a content-form.

Established as a word in the dictionaries, 'ulogs' will form the basis for a new internet, a dynamic internet filled with humans, whereupon 'content is queen'.

Uloggers will emanate globally, similar to how there are vloggers and bloggers. "Everyone can ulog, not everyone can blog or vlog."

To remove all barriers to entry from valuable 'human activities' like 'content-creation, content-curation, content-promotion', the concept of ulogging was born.

Words still rule the world; "let there be light" and there was light.

What exactly is a ulog?
A ulog is a form of content spanning across any topic or niche, that is created 'fresh' at every instance (i.e without resourcing from that internet), composed entirely of ‘excerpts of U’.

The word 'ulog' can also be used in terms of 'a web-space made up of ulogs'. Similar to how one would say, "i have a blog" or "i have a vlog"; one can say, "i have a ulog". However, a ulog possesses tenets that allows content-creators, content-curators and content-promoters to 'consciously evolve their human', while reshaping the internet.

The letter 'u' seen in the word 'ulog', is synonymous to 'you'. A ulog created today should not have existed anywhere on the internet yesterday.

e.g when creating a ulog about 'cryptocurrency', each excerpt of your cryptoulog, whether 'meme, image, photograph, gif, text etc', should have been created 'fresh', by YOU, without resourcing from the internet, born solely out of events, experiences, feelings, sentiments, moments derived from a particular day.

Starting out as a simple hashtag on the Steem (now Hive) blockchain, '#ulog' went on to produce some '50,000 posts and 179k comments' after the first six months of its inception and was used by more than 5,000 people. See stats!

Even without much incentive (financial rewards), people ulogged. Uloggers began to emanate gradually, so far creating an online community of more than 5000 people.

Modeled around 'mining the human', the primary reward from ulogging is 'real human growth'.

Understanding what 'Ulogs' are, how it was formulated and its history will instantly help you understand 'Cryptoulogs'.

Every innovation emanating from our ecosystem, 'the Teardrops ecosystem' will be 'very content-based'. Our content-base? Ulogs!

A cryptoulog? A cryptocurrency-related ulog!

In the broader scheme of things, Cryptoulogs is a side-project emanating from the Teardrops ecosystem.

Here are some blockchain records capturing the evolution and formation of 'ulogs':

Would you like to help with building Cryptoulogs? Are you a programmer? Contact me via '[email protected]'.

I am surpassing google