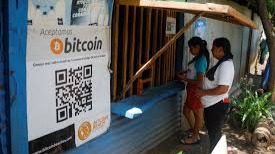 NBC News reports show that El Salvador's adoption of Bitcoin was quite rushed and that the currency hasn't really been adopted in the streets of the country.

Owners of local businesses must say that they accept the currency, yet when it comes down to it, transactions come to a stand still while proprieters and workers either struggle with bitcoin payment systems or put pen to paper to figure out how much to have the buyer transfer.

It is said that the Bitcoin ATMs inside the country can take up to three hours do deliver Bitcoin to digital wallets. Customers have also reported markets claiming that their transactions were denied while losing the Bitcoin they were using in the transaction. Trying to challenge the businesses authority becomes quite controversial when you take in to effect the anonymity of Bitcoin transactions.

Signs reading "Bitcoin Accepted Here" shelter proprieters with friendly faces answering "No. Lo Siento" when you ask them about paying in the currency.

The actual adoption of Bitcoin into soicety has a long way to go. But it is plausible.