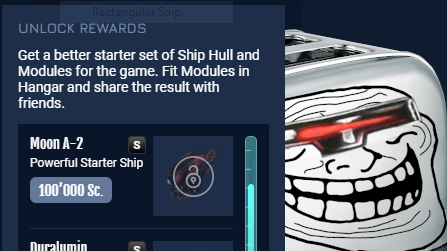 Return of the Spinning Ship Simulator

So guess what? 2021's best-in-class spinning spaceship simulator Farsite has a weekly reward for writing blog posts! Why should you care? Because there's a shiny red starter ship if you rack up 100,000 scores for their airdrop program! Oh, the airdrops? Hah. Forget those. They're only for "influencers" and other scum with tons of simps following them around the internet. I've done everything except the Fakebook offers (because I refuse to get anywhere near that clusterzuck of a website), and I'm still at less than half the score of the guy in 100th place, the lowest placing that even gets a chance to get an airdrop when it comes in. Unless a whole heck of a lot of people use this stupid referral link to sign up for the game, that's the way it's going to stay. "NO AIRDROP 4 U!" But whatever! I don't give a rip as long as I get the red ship that reminds me of my demon slayin' days.

So what about the game? Is there anything to it besides staring at the rotating ship until you puke? Nope. That's it. That's the game, at least for now. You can put guns on the ship though, and they're actually visible on the ship's model, so that's something I guess. The game still isn't playable. The developers are just simping for free advertisement from idiots like me, but I'm going to be perfectly honest - if they deliver what they have planned, it might be a decent game. Above the spinning ship, there's a "guide" button. You can click on that and see what's supposed to be in the game.

I did happen to notice that "nuclear" was one of the listed ammunition types, so get ready for nuke ganks by your local griefers and Kim Jung Un impersonators. Well, then again, this game has in-game taxes levied by star system governors, so you might see players do the American thing and start a war over taxes, although other space MMOs are any indication, it'll probably be Russian or Brazilian players instead of Americans. But hey! If you can bring down the corporatocracies and the commies, more power to ya. That's what PVP is all about, right? You don't like something, so you start shooting and get blown to smithereens over and over again by some guy and his giant clan of griefers ...wait, what? That's not how that was supposed to end!

If I had to guess, the likely inclusion of extremely powerful weapons will have something to do with the constant battle over scarce resources. Maybe you'll have to decide between spending a month's worth of income to nuke those Russian PVPers into sweet oblivion, or using less expensive ammo and trolling them until they bug out. Actually, what if you could get the Russians and the Brazilians into a magazine measuring contest, then nuke them both? STONKS! ...in both the stock market and the artillery sense of the term. The whole gameplay loop pretty much revolves around getting resources, building ships, guns, and ammo to fight over more resources, losing the crap you made, and building more with the spoils of war, so I would expect to see that sort of thing to play out just about every Friday night.

Oh yes, it will matter who takes over the area where you live as well. This isn't EVE where you can just haul your junk to another star system if the local crime lords turn into commies and jack the taxes up to 80% to fund their free pony program. You actually have to set up a base somewhere if you want to make stuff. If you're a good governor, you might actually see land owners join up with you to fight invaders. (Then again, who ever heard of a good politician?) That might make it pretty difficult to take over populated star systems by military conquest. More likely you'll see people do it the usual politician way, by weaseling in places they don't belong and sabotaging anything that stands in their way. So, if you see some newbie in the guild gaining favor unusually fast for some reason, nuke that little snake! He probably blackmailed somebody.

If you're tired of seeing posts about Farsite, you've got nothing to blame but a little red ship. It's hopeless to try to get in the top 100 now, so this is the last post you'll see out of this toaster at the very least. I can't speak for the rest of the idiots trying to grind out scores before the alpha release, but I'm just going to stare at my spinning red ship a little while, and then come back when the game's playable.