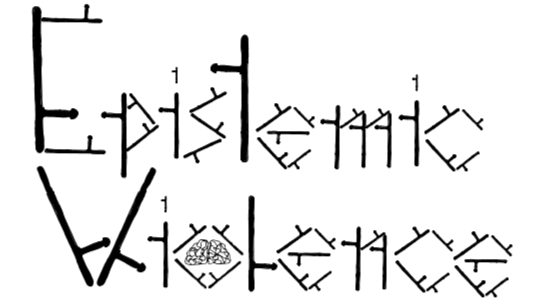 States can exercise violence over their people in at least three ways: Instrumentally (through police, military, corrections), structurally (through social organization that grants power and privilege to some while depriving others), and epistemically (through the marginalization of specific groups through laws and discourse) (Alimahomed-Wilson and Williams 2016). It is the most quiet, unsuspecting form of control, though it is necessary for the process of domination because it legitimizes the other types of violence (Galvan-Alvarez 12). Spivak borrows this concept from Foucault, who describes the phenomenon as when “a whole set of knowledges have been disqualified as inadequate to their task or insufficiently elaborated: naïve knowledges, located low down on the hierarchy, beneath the required level of cognition or scientificity” (qtd. in Spivak 281). Though she believes that Foucault failed to pay attention to the most pressing occurrence of epistemic violence during his active time of writing  – the British colonization of India. She says “The clearest available example of epistemic violence is the remotely orchestrated, far-flung, and heterogenous project to constitute the colonial subject as Other. This project is also the asymmetrical obliteration of the trace of that other in its precarious Subject-itvity” (Spivak 280-81). It is a “complete overhaul of an episteme” with a “silent programming function” that constructs “a self-immolating colonial subject for the glorification of the social mission of the colonizer” (Spivak 283-81). It is labeled as violent because it dehumanizes and erases the third world people (Ivey 384).

While Spivak illustrates a paradigmatic case of this in her essay, “Can The Subaltern Speak?” Enrique Galvan-Alvarez (2010) points out that it does not only occur for colonial establishments, but in all types of domination. Epistemic violence can manifest in two ways, namely discriminatory and distributive (Bunch 12-3). Discriminatory epistemic injustice begins with the initial dehumanization process of constructing an out group. The discrimination manifests “when a speaker [of an out-group] receives a deficit of credibility owing to the operation of prejudice in the hearers’ judgment,” which rejects the speaker’s possibility of being a knower (Fricker 1319). This creates an immense challenge for the subjugated group and its members to become part of the societal meaning-making process and undermines their social experience. The domination of an episteme brings about material conditions that effect the societal welfare of the out-group. Distributive epistemic violence occurs when resources, education, and, ultimately, human rights are unequally distributed to the out-group (Bunch 13-4). Therefore, epistemic violence is the predominant justification tactic of the exertion of power of a body of individuals, because it can escalate to structural and institutional forms of violence and domination.

PhD Student in Communication at University of Southern California. Writer/Editor of Coinside and To Sense.

Graduate students write papers every week that we share with our professors and a small group of colleagues. We're lucky if we get 10 sets of eyes on work that we put hours, sometimes weeks of effort into. To Sense is an outlet where I'll post my past and future Communication and Cultural Studies essays that would otherwise never be read again. For my friends, family, professors, fellow scholars and the generally curious - enjoy. Maximilian Brichta