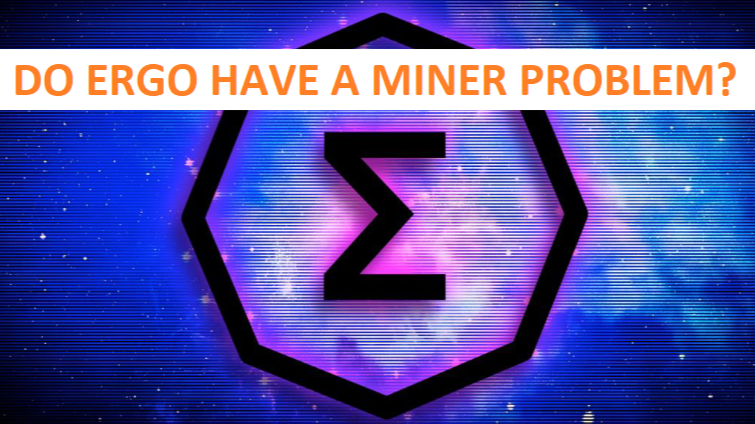 Miner problem with Ergo, how questions are dealt with and can you help?

After the Merge, there was a lot of hashrate migrating to other PoW coins. And one of the coins that were hit hardest was undoubtedly Ergo. As they saw a massive spike in hashrate join their network. This sudden increase in hashrate had a very severe effect on the difficulty levels that spiked enormously.

What appears to be the issue?

With the spike in hashrate, as I said, the difficulty spiked like crazy as well. And with this high difficulty, it has close to removing any profitability for miners. If this is an issue(bug or a feature, well that depends on who you ask.

In general, miners are not all too happy about the way this worked out. And as a miner myself, very very small time but still go miners! I would like to say that it is not all about profits. I would say the underlying issue is more the fact that the system looks like it can be gamed. Let me explain what I mean by that.

The way it works now is the system looks at the average hashrate over epochs. And if the difficulty is low and a lot of hashrate enters all at once,  by a farm joining. Then they will speed up block times and get a lot of coins in a short amount of time. And after some time, the system answers by ramping up the difficulty.

They can then stop mining when the difficulty is shooting up again. And what happens is the loyal miners or small-time miners are left holding the bags. They now get to mine with very high difficulty and long block time. And this will then go on until the next epoch. When the difficulty can get adjusted and lowered.

The problem now is there is nothing stopping the farm from repeating the same thing as soon as the difficulty gets lower again. Potentially this jo-joing can have an adverse effect on the loyal and small miners. As they, I assume, fairly quickly will get tired of being left with the check, as the big fat farms constantly dine and dash. Leaving them with the bill.

But let's be clear, this issue is, at least for now, only a potential one. As we have yet seen any significant lowering of the difficulty. So we do not know for sure if we will see a new spike in hashrate. But if we look at the charts we can see that we now virtually are back at pre Merge hashrate but with a 5 time as high difficulty level.

What is the official response to this?

To be clear, this is yet an issue. But it is something that definitely has the potential to become one. At least that is the fear among many miners, me among them. When I saw that earlier yesterday, the 22 of September, the Ergo team was going to hold a Weekly update and AMA. I thought I would take the opportunity to ask them directly what they thought of the issue, and if they had any plans to address it.

I was joining by just under 70 others for the youtube live session. And I was able to ask my question fairly early in chat. Even if it took some time for them to get to the question part. And yes, there is a shamefully type in the question. Got to keep the quality the same as on my posts. ^^

And while they initially in the talk sort of addressed the situation as well. My impression of it was that in their opinion there was no real issue. And any potential problems that existed all would disappear with the next bull run.

The first thing I have to say is anyone that speaks with absolute knowledge of the future is an idiot. -Joseph Armeanio

But when they finally came to my question the answer they gave was this comment about persons knowing the future being idiots. Followed by "the best thing, in my opinion, is to collect data moving forward, right. And if that is an issue we have a working group in place that is formulating in the eip [?] to plug in a potential solution. And we have another group that is tracking that. ... And if there is a problem let's come up with a solution."

To me this just sounds like a lot of hot air, and they appear to not have given this any thought whatsoever. And I know for a fact that I am far from the only one who has raised this potential issue to them. The miner and youtuber Son of a Tech even said he raised this issue to them before the merge.

If you want to view the video in its entirety you can find it linked here below.

The response from the chat

There was some time from when I was able to post the question in chat to when they addressed it in the AMA part. And during that time, and potentially after as well. But I can't say that for sure as I did not what for the whole of it. I only stuck around for about 45 min of what became a 1 hour video.

There were several people in the chat who were very appreciative of me and the fact that I was asking about this potential issue. They of course asked me to "educate myself". And told me I did not really know what I talked about.

And apparently, there is some sort of beef going on between Ravencoin and Ergo. Something I was totally unaware of. But I was apparently from the Ravencoin camp. A holder of Ravencoin as well as a Ravencoin Maxi. Strangely no claim of being a FUDer, but I guess it was sort of implied in their claims and statements.

And it pains me to say this, I am ashamed of three things.

The first one is I still do not know what a "Maxie" is, so I clearly have to address that seeing that I in fact have been one all along. Without me knowing it. The second and third part Is the fact that I was not very kind to at least one of the people in the chat. By asking them to jump off a cliff. And the third part is I actually blocked most of them. Simply because I wanted to be able to read the chat to see if there where anything interesting being said.

FUD, and why I hate it

And if you have read some of my recent posts. You might have come across the one linked above. And what I encountered in chat, trying to get some answers to a potential problem is the very thing I talked about in the post.

Not to mention the offhand comment from one of the team members about presumably being an idiot.

As I had finished this post and was waiting with posting it I came across something. This something I have to say was pretty unexpected. And also provides this whole thing with a nice twist. 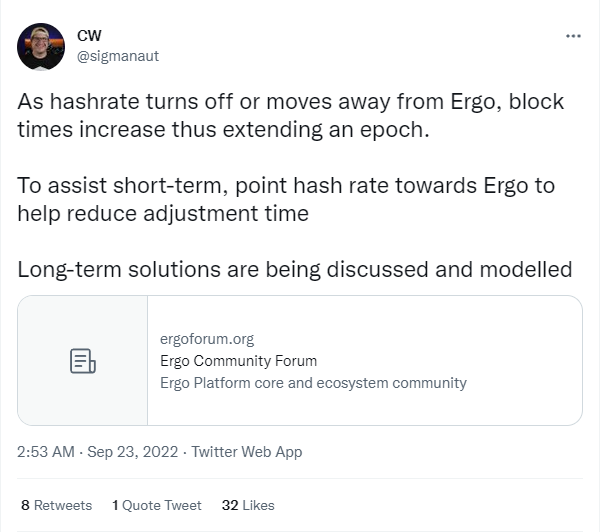 And that was this tweet from one of the members of the Ergo team. In it, Ergo is asking for help from miners. Asking them to bring back their hashrate to Ergo. As the current exodus of hashrate has extended the block times to upwards of 11 min. And with that extending the time of each epoch.

In plain terms meaning that the situation is approaching a possible point of no return. Meaning that if this is left unchecked it might end up killing the whole consensus mechanism for Ergo.

I would therefore also like to ask that if you are a miner, and is not in a financial bind. That you would consider swapping back to Ergo to try and right the ship. Before it is too late. I myself will turn on my hashrate today to try and help as best as I can. And I implore you to consider doing that as well.

Losing a PoW coin, and one with potential as well, would not be particularly good. It would put even more strain on an already tough situation for miners and the other PoW coins.

What are your thoughts on this whole thing? Are I and the other miners just fearmongers seeing problems where they yet arent any? Or is there a real issue here? Are you planning to power back your rigs and try and help Ergo? Please sound off in the comment section below. If you would like to support me and the content I make, please consider following me, reading my other posts, or why not do both instead.