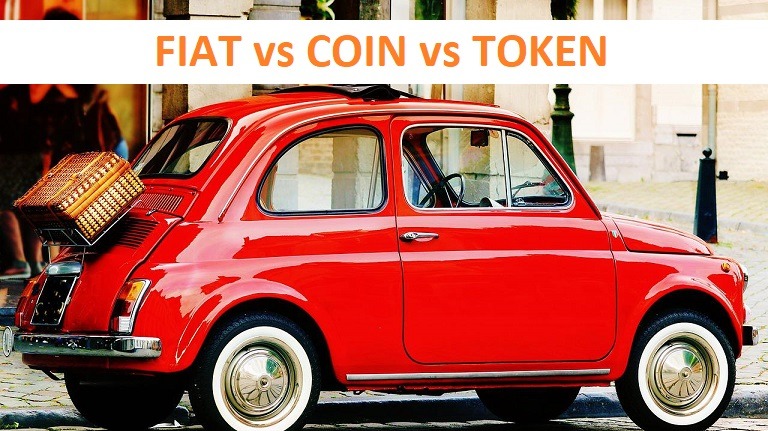 Crypto Basics - Fiat vs Coin vs Token, what is the difference?

In this post, I thought we would take a stab at trying to better understand a few of the words that get thrown around and that seem to mean the same thing. As you probably figured out already they do mean similar things but not the same thing. So let us try and figure out if we can not make this jumble a bit clearer.

If you are new to crypto and lack any prior knowledge I bet your experience is not that unsimilar to mine. I opened an account on Binance when I first started my crypto journey. And I was eminently overwhelmed by the plethora of different choices and words that just looked alien to me. This looked nothing like my online bank, not even close.

So what did I do after I stopped crying? Well, luckily I had my friend that also just started his crypto journey. We did it as a joint venture and a fun thing we could share. Wich, I am really happy about. And as he had already opened his own Binance account a few days earlier he could then guide me through some of the basics. And one of the first things I had to learn was that fiat no longer was just an Italian car.

At least if you are living in Europe you will most likely be familiar with the Italian car manufacturer named Fiat. Famous for their very little car called Fiat 500, seen in the thumbnail. But in crypto Fiat refers to something completely different. It refers to what we in everyday talk call money. This can be The USD, Euro, or whatever local currency you use where you live. We just simply call it money instead.

And all money we use today is Fiat. The word Fiat is derived from the Latin word fiat, which means a determination by authority. The meaning behind this is that it is the government that dictates the value of the money it then issues. If we look back historically this has not always been the case. Earlier the currency used had a value. And by the value, I mean you could always take your money and exchange it for the thing that it represented. Most recently this was precious metals such as gold.

You were then guaranteed that you could always exchange your money for a fixed amount of gold. This was known as the gold standard in the US. If we go back even further then these precious metals were directly used in the making of coins. There are some nice examples of big copper plates being used as money in Sweden. An example of how it was used not only for coins.

8 daler Swedish plate money from 1658, these could weigh up to fifteen kilograms, photo by StAnselm CC BY-SA 3.0

If Fiat means everyday money, what do coin then represent? The definition of a digital coin is an asset that is native to its own blockchain. As an example we can take Bitcoin, Bitcoin logs its transaction on the Bitcoin Blockchain. That means Bitcoin is the native coin for the Bitcoin Blockchain. You can think of the word native here to mean "where its home is". I hope that makes it a little bit easier to understand.

Another feature of digital coins is that when you send them from one person to another. Nothing changes places. The coin is all tracked in the Blockchain. The Blockchain in a sense works like a big digital ledger, that keeps track of all the transactions and who owns what.

The most common use for coins is as a digital counterpart for fiat, this means they work and can be used just like normal money. If you buy and sell things you can get paid with coins just like you can with money. And just like any other currency, their exchange rate fluctuates. Al be it coins tend to fluctuate a bit more than normal fiat does.

But there of course are examples of coins having more features and purpose than just serving as a store for value. Examples of these can be paying transaction fees or getting voting rights.

The main thing that separates tokens from coins is that they do not have their own Blockchain. Instead, they piggyback on an already existing Blockchain. The tokens are generally referred to as tokens native to the Blockchain they are using. As an example tokens that use the Ethereum Blockchain are known as ERC-20 tokens.

While coins are controlled by the Blockchain, tokens are dictated by something called Smart Contracts. These control every function a token has. This means that creating a token is much easier to do. This also means that there is a lot more different type of tokens than coins.

The purpose of a Token is often to interact with a dApp, this can mean unlocking certain features. An example of this is PancakeSwap, here you can swap most Coins and Tokens for each other. But they also have a staking feature, where you can earn Tokens that are not their own. But in order to do so, you need to stake Cake, their own token.

One of the benefits Tokens has over Coins is they require less infrastructure to work. If you create your own Coin then you would need to figure out how you want the transaction verification process to work. And then you also will need to implement it, and probably run it all in the beginning. This meant that the level of entry for a Token is much smaller.

One other thing that sets apart Tokens from Coins, is that you probably already figured out. Is that where with Coins you do not send them back and forth, your transaction only tells the blockchain that now owns the Coins. But with Tokens, this is different. Here you actually sent the tokens from one wallet to another.

I hope that you have found this post to be informative and of use to you on your crypto journey. While I was not able to cover every edge case for Coins and Tokens I at least hope you now have a better understanding of what sets them apart from each other, and Fiat for that matter. If you want me to take a stab at another topic please let me know in the comment section down below.

I have also just started a new series of weekly posts, that will go live every Friday. You can catch the fifth step here: