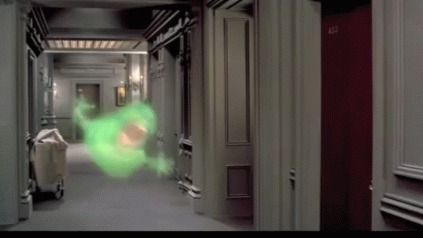 Ghostbusters: Afterlife Review | Not too shabby | No spoilers

Kinda funny, no | Image courtesy of Tenor.com?
I was never really a fan of the original Ghostbusters. This not because I didn't enjoy it, but rather because I simply was not of that era, it was a time beyond me.

This doesn't mean that I didn't enjoy the film, I thoroughly did, and that was mostly because it was goofy fun. Now, I'm not unaware of the fame the first Ghostbusters attained, but that fame has never been truly replicated in subsequent films. The second Ghostbusters was just mediocre, and the 2016 reboot was just absolutely horrendous in almost every way. With all this in mind, Ghostbusters: Afterlife had a lot to live up to, it had to rehash an old franchise that has failed to garner noteworthy fame for decades and create new fans for the franchise.

This guy was kinda, sorta, a disappointment in this film | Image courtesy of Tenor.com

I’m going to do a weird thing here by beginning a film review by first discussing the cast, but hear me out — there’s a reason for my madness.

Let’s get one thing straight, the ensemble cast in this film are all good actors. No, scratch that, they’re all terrific actors. But, there is a significant issue with the pacing of the film and the stature of the actors. It is very clear that these actors were hired to garner attention to the movie, in particular, the appearance of Finn Wolfhard, and Paul Rudd, appear in this film for Columbia Pictures to capture some of the success they garnered in Stranger Things, and MCU, respectively.

Because this is a two hour film, you cannot thoroughly explore each individual ensemble character unless they’re paired in a cohesive way to truly explore their mannerisms but this doesn’t work with the dynamics the film tries to establish. For instance, because Finn Wolfhard is acting as an edgy teenager, he cannot truly bond with his family — in the conventional sense- because that would go against his character archetype. Usually for his type of character they would grow emotionally through their relationships with other teenagers, and somewhat with their immediate family, however there’s not enough screentime for any of this to occur. Thus, the film runs into an issue where Finn’s character doesn’t really become anything of note until he, and his teenage love interest, are thrust in the main conflict of the film. Hell, I don’t think they even name some of Finn’s friends outside of his forgettable love interest.

Finn is just one example, his love interest another, of characters are not seriously of note throughout the film and it’s a damn shame.

Phoebe and Podcast, the stars of the film

Phoebe with the Sass | Image courtesy of Tenor.com

Phoebe, and Podcast, are the primary protagonists of this film and represents the target audience of this film - kids. By that notion they discover the history of the Ghostbusters and unveils it to all the kids watching. Now, this dynamic is not something new, not at all, but it is fun to watch a good child dynamic in action and because it is the primary interaction you'll witness throughout the film. You'll actually see these two interact more than the primary family which is bizarre but good because the principal family cannot interact like a family.

What the hell was Carrie Coon doing

Ironically this was the face I made whenever I saw this women on screen | Image courtesy of Tenor.com

The primary issue with the 'family dynamic' in this film is the mother, Carrie Coon. She cannot act like a mother. Yeah, I get it, she is a single mother in 2021 and thus her dynamic with her kids is not your contemporary one but that is not a proper excuse for her performance. Honestly, I get that in modernity mothers are depicted far more realistic than they were in the 20th century, but this lady gives no fucks. Like I mean, this women has absolutely no care for what is occurring in this movie up until the final conflict. She talks to her children like she just found them and the idea of being a mother is a foreign concept when she continuously tells us how much she cares that Phoebe be 'ok'. That's kinda the issue with her character, through exposition, and dialogue, you'd expect her to care as much as they say she does, but she doesn't express it enough for you to believe her. In actual fact, she acts more like an elder sister than a mother and I think Reitman should of maybe given her that role than force a character that Carrie Coon clearly doesn't know how to portray.

but, we're getting held up by the dynamics of the cast, let's now move onto the meat of any film -

The plot of Ghostbusters: Afterlife has been crafted for Ghostbuster fans, consequentially, if you don't have an iota of interest in the Ghostbusters mythos - you're not gonna have a clue as to what the hell is going on in this movie. Hell, I barely knew half the references Jason Reitman (director of the film and obvious Ghostbusters fan) through into the movie, in actual fact, I swear you could craft an entire drinking game under the premise of identifying what the references in this film.

And that, the nostalgia that oozes out of every precipice either makes or breaks this film for you. No, truly, you're either going to love the nostalgia or you're going to hate it, because it's impossible to ignore.

Now, ignoring the nostalgia aspect, the plot is truly not that bad and that's because it's not really anything new, but what gives this film some spice are the interactions between Phoebe and Podcast.

I believe that the cast members could of done more to flesh out their characters, they have the talent to do so, but the director seemed to give more importance to nostalgia than to the characters which was a significant gamble as this film was supposed to both assure fans in the direction of the franchise, and capture the hearts of children to craft new fans for decades to come.

But this all builds to the -

It's time to do as the GIF commands | Image courtesy of Tenor.com

Ghostbusters: Afterlife is good film. It's not groundbreaking, it's not splitting the atom, but it will make you happy. It's a joy to behold and renews hope for the future of the franchise. I believe if they continue to keep up this children dynamic it would take the series into newfound directions.

I'm excited for the future of this franchise, are you?

Also, note that some of my content is cross posted on various platforms, so you may see these articles on sites like hive.blog or read.cash.