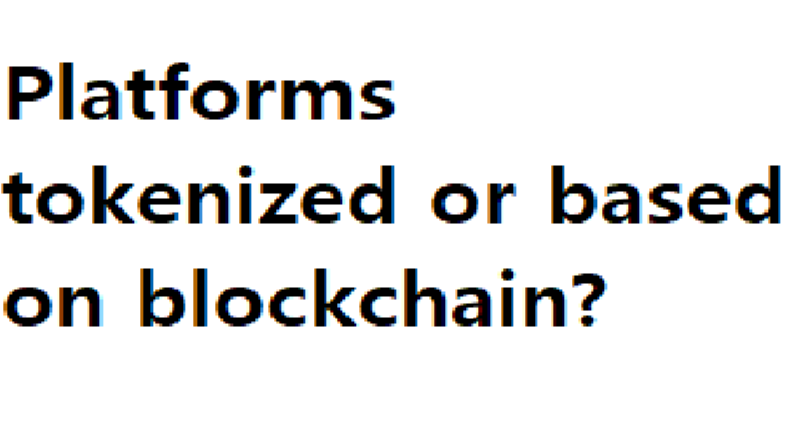 Platforms tokenized or based on blockchain?

Perhaps you are wondering what has the amazing blockchain that once you understand how it works, you cease to be the same, the uses of the protocol is that it is a database that is public, that is immutable, unforgeable, and being transparent to many this is vital, the way data is stored, and one example of how it works great, is in the use of platforms based on blockchain.

These tokenized platforms, allow users in part to convert those social points that are those that in other networks could accumulate, in some fraction of money, and this is striking for many.

Platforms that are oriented to a public creating exclusive themes, the community that makes life there is really amazing, and this is what matters most in the platforms, who make life in them, I have had the opportunity to find developers, promoting their project on this platform, or those who manage a node or witness, which means they have a commitment to the blockchain, if perhaps you do not know it is a node or witness, because the simplest explanation is that, say they are the ones who have a copy of that database, and just as they have a copy of all the transactions, they are the ones who verify the entries of new data by adding them in a chain, they all work in perfect harmony, that is why it is decentralized, they will ask themselves what is the incentive of this activity, because these transactions are accumulated in blocks, that is to say an amount of information is piled up, and they verify, these transfers have a fee, very small in some cases, this fee is the one that rewards the nodes or witness that hold the blockchain.

In a blockchain-based on a social media, these actions can be, create a profile, make positive or negative votes, comments, follow, stop following, make transfers since they usually have a purse, or address in which those tokens are in the accounts of each person, even those transfers, are sent or received are registered, this makes it transparent, since it is easy to track if there are profiles that abuse the system, and through visualization tools these data can be viewed, collected and organized.

That's why an important part of blockchain-based platforms is their community, especially if they are developers, it's what makes a network great, the capabilities they have to create decentralized applications, and have used in different ways, creating games to give an example.

In the blockchain, depending on the technology in which they are working there are certain characteristics, scalability, how many transactions can be contained in a block, how many blocks can be processed in a given time, the concept of fee to reward the nodes/witness, generally these characteristics are the ones that mark the differences of some and others, besides the inflation, the total emission of tokens, the type of form in which it works, for example, there are the Proof of Stake, that is to say the one that more tokens has, can generate but, they can print a proportional fraction to the quantity that they have accumulated.

This is content creation platforms makes certain users have more interaction in the sense that as they know that these users have an accumulated amount and can generate more tokens, they can encourage activities, promote themselves, and create business models based on exchanges, or create jobs for content creators, but here enters another factor, there are people who seek to earn money by the easy way, using dishonest practices, resorting to plagiarism, to give an example.

Most platforms have teams that are responsible for exercising a corrective action according to those agents that divert what should be a platform for creating content, neutralizing and reducing their ability to act, which is why the community that makes life on tokenized platforms or any platform where it can be monetized, is that it has the culture to denounce these practices, the fewer abusers, the greater the number of quality authors that can be visible.

Each platform based on blockchain has a different dynamic, soon I will do a review on each one that I have been part or have been using. Begin to get used to the use of the blockchain, is something that all must begin to do, big companies begin the study and use of this technology, it is for that reason that we must make use, and to introduce us those that still have not done it and to explore the platforms that in my next publications I will explain, by means of reviews, and I will make use of infographics and other resources.