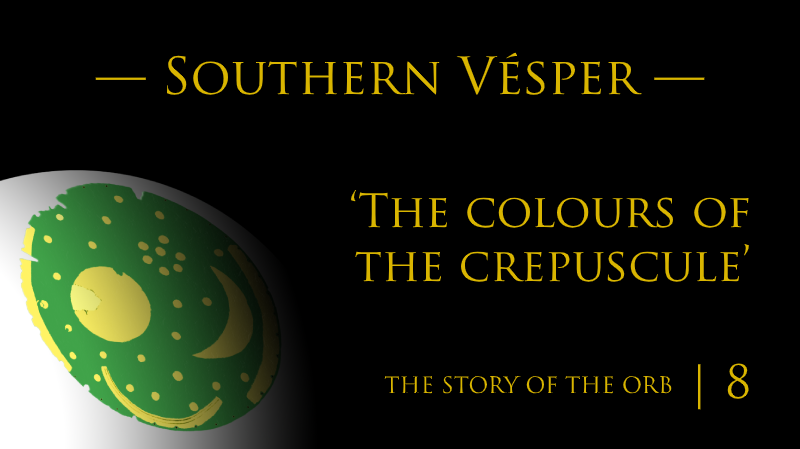 The colours of the crepuscule were always different on the island, perhaps due to the sea or the South. Vésper had not missed one since arriving at that blessed beach. Since the old man died, he and Gui sometimes watched the sublime exhibition seated beneath the large tree, but on that day Vésper was by himself. The birthdays of both had been several months earlier, coinciding with a big fishing trip in which they took part, and, on account of a storm, they would arrive after the dates; furthermore, Sara and Mentesúfis had been away visiting an old friend — all this along with a lack of mood for parties, due to the still recent death of old Guilherme. But, now, the day was approaching when Vésper would return to the Little City of Pan; at this time Gui had decided to prepare a farewell delicacy — and for their birthdays, delayed but not forgotten —, forbidding him from entering the kitchen until it was ready. Therefore, without the slightest culinary talent and knowing his friend’s passion for Sara, and armed with the information that she and her father had returned from their brief trip, he decided to go to the village while it was still early and invite them, and thus have a surprise. Given the voracious interest of Vésper in Mentesúfis’ literary collection, he had no difficulty staying busy for part of the morning. After another little chat with Mentesúfis, about a tale he had been musing over for several days, he invited them; the Master thanked him very much, but, unlike Sara, he did not guarantee that he would go, since he still felt a bit tired, but that he would do his best. The young man confirmed the time he would return to accompany his friend, and kindly said goodbye to both.

At the end of that afternoon, Vésper had told Gui that he would take a walk along the beach, and use the opportunity to check the floats on the nets, since he had already packed most of his things and cleaned the house, and he found it irritating to be doing nothing. This was merely an excuse to go pick up Sara. The tide was very high, and the moon was full; there was plenty of light and he saw no need to take the lantern. She was already waiting for him at the door to her house, she was wearing a white dress of very delicate fine linen, with little black pearls crowning the entire edge of the neckline, her undulating hair gathered with a little white ribbon reminded him of the virginal figures at the Pan aestival celebrations. She was truly enchanting, she offered him her arm, and, laughing, they headed out, waving to the proud father who threw her kisses and recommendations, but on account of the cool of the night already making itself felt, from above a shawl also fell on top of them, of white cotton finely embroidered with olive branches and, marking the centre of the triangle, a minutely crafted, curious minuscule red rosebud, the work of Sara’s late mother; the two of them looked up and saw Mentesúfis at the window, laughing and sending them off.

They walked over the pontoon, the water was still quite high, and Vésper did not want the young lady to ruin her delicate blue ankle boots in the wet sand. They passed under the stilts of the fish factory, which was already some distance from the village, and began descending the last stairs that accessed the beach from the end of the pontoon, Vésper stopped suddenly in the middle of the steps and looked at the sea in the direction of the two breakwaters that, illuminated in the moonlight, looked like a pair of pale extended arms, like someone receiving or asking, and he saw rushing into them a vessel of gigantic proportions, in such a way that it gave the impression that it would tear the hull against the stones of the breakwaters. It glided silently like a ghost, no crew in sight. Sara tightly gripped the young man’s arm, and a shiver ran through her body. He looked at her and put her shawl straight, covering her better. He turned back to the navigating enormity and, as it entered the village, the youth became uneasy. Suddenly he felt that they should hide; at the end of the ladder arose a heap of wicker baskets, they reeked of shrivelled fish and Sara showed reluctance to bend over, but Vésper pulled her down and whispered:

‘Don’t make noise or let them see you.’ She looked at him in amazement.

‘Really, they are so far away. I doubt they can see us, much less hear us!’

Vésper did not agree with such evidence; to him they were too close, even without being able to explain why. Of the vessel, one could no longer tell its colour, the hull was all rusty, full of stains, one could say it had been quite maltreated, probably by the innumerous trips it had made. Vésper could not help but admire the solitary procession of the giant, it reminded him of an implacable soldier — a fact that made him recall something he had heard several years before arriving at Nana, from his grandmother Diáfana, while she was combing her hair in front of the ‘water wall’:

‘“… Time marches on our existences like a determined and implacable soldier, reminding us that there is no time to lose…” And her reflection in the water that ran unstoppably down the tile wall was like a living illustration of those words. The grandson, then still an immature youth, positioned himself between her and the wall giving her his hand, pulling her gently and saying with a smile:

“Come, Grandmother, come see my miniature constructions around the ‘soul Vésper’, and do not worry, if necessary my little friends will have a word with time so that it marches in silence, so it will not disturb you!” Diáfana laughed, kissed him on the forehead and, thanking him for his solicitude, the two of them walked away holding hands through the water garden.’

Sara began to show nervousness and impatience, reminding Vésper of the friend waiting for them with food getting cold on the table, and with that convinced him to carry on walking — the last thing he wanted was to have to listen to Gui’s grumbles all night. A few metres from the two houses the light of a lantern came in their direction, it was Gui gesturing noisily, but when he spotted Sara all of his irritation at the delay dissipated. He ran to embrace her, leaving Vésper with barely enough time to catch the lantern, which almost fell. The three headed happily towards the familiar kitchen of the old man’s house. While they were giving priority to the young woman, Vésper heard his friend telling him softly:

‘It is the best surprise, the ideal present! Thank you, little brother!’ Smiling generously, he bore the expression of a child-man, pulled out the chair for Sara to sit down, and added, this time with a nostalgic smile: ‘To be perfect, the only thing left was for all our much-missed ones to be here…’ Vésper returned the smile, touched him on the shoulder gripping it lightly and replied:

‘We don’t know if they aren’t… One thing is certain, living or dead, as long as we remember them they shall remain. But I too miss them very much.’ Now it was Gui’s turn to console his friend in his own way; letting out a sigh, he arched his brows and concluded:

‘Sit down and let’s eat before the food gets cold.’ Then he looked tenderly at Sara, who waited patiently, cherishing the moment of the two boys, went to her, and, kissing her lightly on her rosy lips, apologised, to which she responded:

‘Not even if you were blood brothers, although different, would you have such similar souls…’

The Story of the Orb | Episode 9
Southern Vésper — ‘Too precious’

Food for the body and the mind. Vésper’s farewell… Missing the past and the future.